The ice that tumbles into the ocean along Alaska’s coastline often makes for dramatic images that show one of the ravages of climate change – melting tidewater glaciers that contribute to sea level rise. But a new study finds that far more meltwater is flowing into the sea from a similar, if less frequently photographed source – inland glaciers.

Compared to their coastal counterparts, inland glaciers account for 95 percent of glacial mass loss due to climate-driven melting, a study published this month in Geophysical Research Letters shows. In fact, researchers found that Alaska’s glaciers are melting so fast that they would cover the state with a 1-foot thick layer of water every seven years. 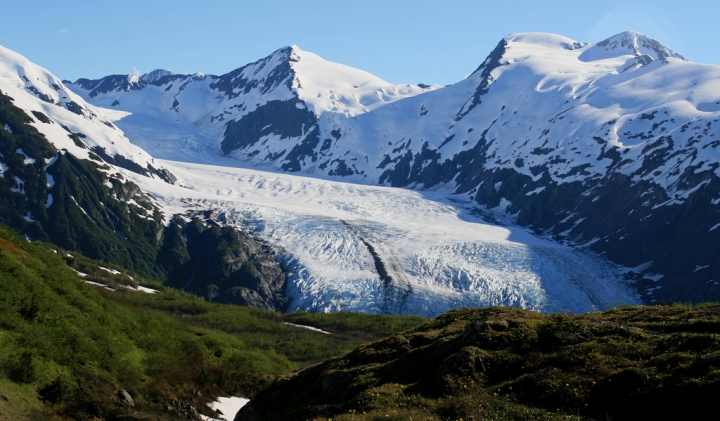 Alaska is an anomaly, with temperatures rising an average of 3 degrees in the last 60 years, twice as fast as the continental U.S. Scientists predict that temperatures will rise another two to four degrees by 2050. The world’s oceans have already risen 7.5 inches since 1901, and if warming continues unabated, they’re projected to rise as much as 2 feet by the end of the century.

To determine how different types of Alaskan glaciers melt, researchers from the University of Alaska Fairbanks and the U.S. Geological Society relied on a combination of analysis and observations.

Airplanes equipped with lasers allowed the scientists to directly measure the mass of more than 100 individual glaciers, representing 40 percent of the ice cover in the Alaska region. The process was repeated every few years to determine how quickly the elevations and masses changed over time.

The researchers combined this data with information from a database to make digital models of the glaciers’ elevations. That allowed them to determine how previously unmeasured glaciers lost their mass, something O’Neel said had never been done before.

Because accurately measuring individual glaciers is a challenge, previous research used the available data to make a consensus estimate of the world’s glacier loss. Scientists originally thought the Alaska region lost 50 gigatons of mass, or 50 cubic kilometers of water, a year.

This study’s researchers found that the number is actually 75 gigatons, which adds 0.008 inches to the sea level each year. This number may seem small, but from 2005 to 2010, Alaskan glacier losses made up one third of the world’s ice sheet losses, despite having 20 times fewer ice-covered areas than Greenland.

Alaska’s glaciers contributed to one third of the world’s ice sheet losses from 2005 to 2010, but a new study suggests melting, not calving as shown here, contributed to the most loss.
Credit: Mack Lundy/flickr

“What we did that is new and gives us more confidence in our results is that we treated every glacier across the whole region independently. Whereas in the past, scientists said, ‘Here are the measurements and we kind of know how much other ice we haven’t measured,’ ” O’Neel said.

“Everyone just kind of expected Alaska would lose a substantial fraction of mass from calving,” he said, referring to the loss of ice from tidewater glaciers. “If there was a big piece of the pie that was coming from calving, that would make it harder to predict what’s going to happen in the future.”

Joseph MacGregor, a University of Texas at Austin glacier researcher who was not involved in the study, said that in “undertaking challenging flights over these glaciers” the researchers have found a new way to predict how glaciers will thin in the future.

“This research points the way toward easier predictions of future glacier thinning, but the future remains bleak for Alaskan glaciers,” MacGregor said.