Widespread Greenland Melting A Sign of Things to Come

When 97 percent of Greenland’s ice experienced at least some melting in July 2012, scientists wondered if it was a one-time phenomenon. Now a new study in Geophysical Research Letters indicates it is a sign of things to come and by 2025, there is a 50-50 chance of it happening annually.

It’s not clear what the effects of such melting will be: the majority of Greenland’s ice loss, which has accelerated significantly over the past decade, comes from glaciers shedding more ice into the sea, and moving faster toward the sea, not from melting snow and ice at higher elevations of the ice sheet. 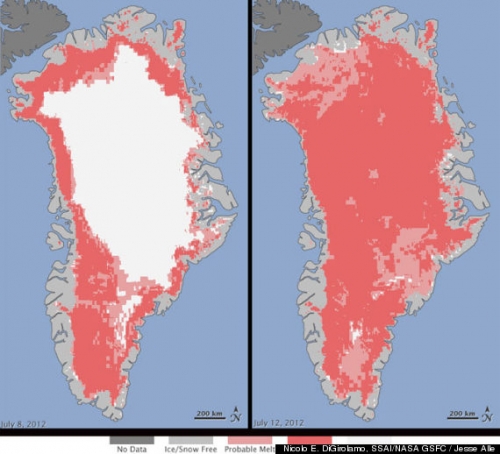 Extent of surface melt over Greenland’s ice sheet on July 8, 2012 (left) and July 12, 2012. In just a few days, the melting had dramatically accelerated and an estimated 97 percent of the ice sheet surface had thawed.
Credit: Nicolo E. DiGirolamo, SSAI/NASA GSFC, and Jesse Allen, NASA Earth Observatory

Nevertheless, such widespread melting indicates an overall warming in the region that could threaten the ice more generally, adding significantly to the threat of sea level rise.

The 2025 projection is based on two factors, according to lead author Dan McGrath, a glaciologist at the University of Colorado, Boulder. The first is a series of temperature measurements going back to 1950 at the Summit research station, at the highest — and on average, the coldest — point on the Greenland ice sheet. The mercury has been rising more or less steadily there for that entire time, with the fastest increase, of about .22° F per year, coming since 1992. “That’s six times faster than the global average,” McGrath said in an interview.

The highest parts of the ice sheet still remain below the freezing mark virtually all the time, but when unusual weather conditions set in — an especially warm air mass, or as in the case of the 2012 melting, an influx of clouds just thin enough to let sunlight through but thick enough to block heat from escaping — the thermometer can sneak above 32°F. “Only an hour above freezing is enough to start the surface melting,” McGrath said.

Another factor that went into the analysis involved what’s known as the equilibrium line — the altitude where the snow is neither piling up year to year nor shrinking. Over the past 20 years or so, that transition zone has been gradually moving up the ice sheet by about 115 feet every year, on average— another indication that temperatures on the frozen island are warming. 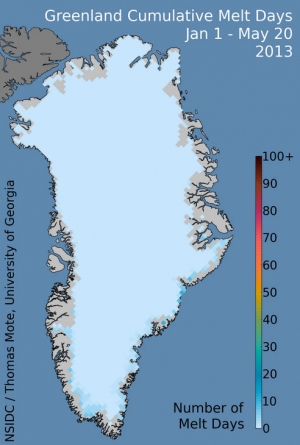 It was this second effect that led McGrath and his colleagues to launch their study. “When our research camp was established, it was put as close as possible to the equilibrium line,” McGrath said.  “If they put it any lower, it would melt out every year, and if it was higher, it could get buried in snow.”

But when the team returned for the summer season in 2009, he said the surface had melted so much that “it was falling apart. It looked like someone had dropped a bomb on it.”

They relocated the camp, and things were fine in 2010, but the following summer it had melted out again. “That led us to look at things in more depth,” he said.

The findings broadly agree with earlier research by other groups. “This is clearly an interesting paper, although I think it’s dangerous to pinpoint such a specific date as 2025,” said Marco Tedesco, a glaciologist at City University of New York, who produced some of that research.

To Tedesco, there’s too little emphasis on how Greenland’s ice would respond to a variety of scenarios for emissions of greenhouse gases, the primary reason for the planet’s overall warming over the past half-century.

Tedesco also felt that the new paper didn’t look hard enough at some of the feedback mechanisms between the ice sheet and the atmosphere that could arise as melting ice gives rise to more clouds, for example.

Nevertheless, he agreed, the overall message is entirely consistent with what others have found: Greenland’s ice is under assault by rising temperatures, and whether or not 2025 will represent a milestone, the consequences over coming decades could be catastrophic.