La Niña events can drive weather patterns wild around the globe from helping exacerbate drought in West Africa and increase rainfall in areas as diverse as South Asia and the Pacific Northwest. The more extreme the La Niña, which is characterized by a cooling of waters in the tropical Pacific, generally the more pronounced the impacts can be.

New research published on Monday in Nature Climate Change shows that climate change could nearly double the likelihood of the most intense La Niñas from 1-in-every-23 years to 1-in-every-13 years by the end of this century. Three-quarters of the increase are projected to come following extreme El Niño years, which are also likely to become more frequent according to previous research.

Back-to-back super El Niño/La Niña have played out before. For example, the 1998-99 La Niña is the strongest on record and came on the heels of the strongest El Niño on record. La Niña helped push heavy rains across Australia and contributed to a severe drought in the Southwest U.S., both areas that were dealing with near opposite conditions the year before thanks to an El Niño that has been dubbed the climate event of the century. The same La Niña also upped the odds of intense hurricanes in the North Atlantic and the 1998 season gave rise to Hurricane Mitch, the seventh-strongest storm to ever form in the basin.

“When you get extreme El Niño, you get some conditions that are favorable to extreme La Niña to follow,” Wenju Cai, a climate researcher at Australia’s Commonwealth Scientific and Industrial Research Organisation, said. Cai led the new research as well as last year’s super El Niño study.

The study’s results offer a glimpse of what the future may hold. And if the past is any indication, getting a better handle on La Niñas could have major benefits.

Overall, nearly half the world’s land areas see their flooding odds change during La Niña and El Niño. That’s a big reason why the current El Limbo is being so intensely dissected and why improving forecasts would be a major asset to a variety of people from humanitarian workers to water managers.

Climate change provides a couple key ingredients that could help drive major La Niñas to form in the future. Ocean surface temperatures are projected to warm faster than deeper layers of the ocean, meaning that when La Niñas do form, the colder water drawn up will be that much cooler than the surrounding water. 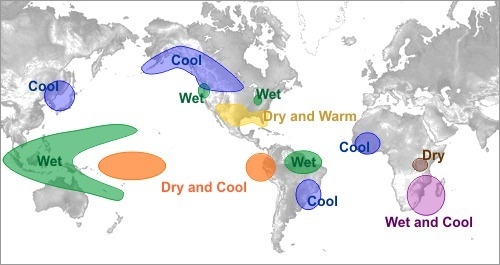 Additionally, the Maritime Continent will warm faster than the central and eastern Pacific. The increased temperature difference between the two regions can also speed up trade winds moving east-to-west that can also help draw cool water to the surface. These shifts help set up a chain reaction that can alter weather patterns around the world from enhanced rainfall moving into the western Pacific to decreased wind shear in the Caribbean and tropical Atlantic, making it easier for hurricanes to form.

Cai said the results were remarkably consistent across all the models used in the study. He also noted that while the frequency is projected to change, the intensity of extreme La Niñas are unlikely to do the same.

In an accompanying commentary, Antonietta Capotondi, a climate researcher at the Cooperative Institute for Research in Environmental Studies, said that the results show “a plausible scenario of changes” but that more research needs to be done to evaluate the mechanisms that Cai and his colleagues identified.

Similar caveats from Cai’s previous super El Niño and climate change study also apply here. Some models used to simulate future climate change don’t accurately represent all the complex factors that can contribute to both El Niño and La Niña. Extreme events are by their nature rare and that rarity also makes it challenging to forecast future changes.

You May Also Like:
Cold Nights Are Decreasing Across the U.S.
Picture This: Illuminating Lightning & Rare Texas Snow
Tales of Ancient Sea Rise Told for 10,000 Years
The Method to Our 1-in-27 Million Madness