The globe is on track for its warmest year on record. But global average temperature watchers won't be the only ones feting record heat when the clock strikes midnight on Wednesday. A number of U.S. urban areas will also join in the record-setting festivities while not a single major urban area will be raising a glass to record cold. In fact, it's been nearly 30 years since a major U.S. city had a record cold year. 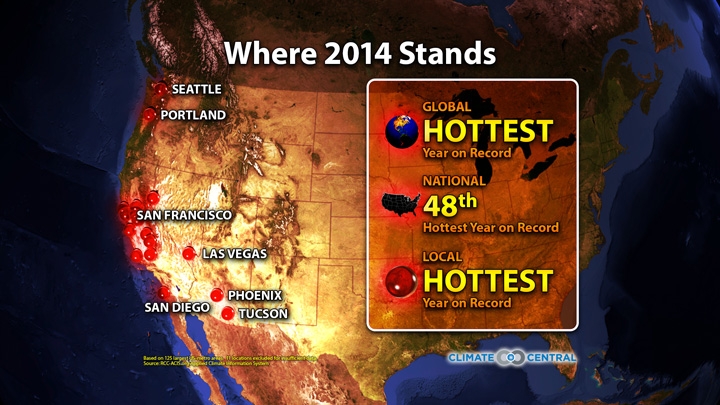 Climate Central conducted analysis of the 125 largest metropolitan areas in the U.S. (though 11 were weeded out due to insufficient data), which showed that 17 are slated to have their hottest year on record. Every metro area primed for a record warm year sits to the west of the Rockies. The heat follows Interstate 5 from Seattle down through Portland, Sacramento and San Diego with detours to San Francisco, Fresno and Modesto before heading east to Las Vegas, Phoenix, Reno and Tucson. Salt Lake City, Los Angeles and El Paso are among other western metro areas also in line for one of their top 5 warmest years.

Perhaps not surprisingly, the five states with record-setting cities — Arizona, California, Nevada, Oregon and Washington — are all on track for one of their top 5 warmest years. Of those five states, California has 10 of the 17 hottest cities, in part because it's such a huge urban state, but also because the heat there has been so extreme this year. As of November, the state was running about 2°F above its previous hottest year, a surprisingly high margin in a world where temperature records are usually set by tenths or hundredths of degrees. Some Californian metro areas such as Bakersfield and Vallejo also beat their previous high records by about 2°F while the Santa Maria-Santa Barbara area is set to beat its old record by nearly 3°F.

The heat in the western U.S. come courtesy of a big ridge of high pressure that's been in parked in place for a chunk of the year, trapping warm weather. That pattern has turbocharged California's drought and some research has tied the development and longevity of that ridge to climate change.

Not a single urban area in the U.S. experienced record cold, despite the cold air outbreaks that froze much of the East for the first few months of the year. Some metro areas, such Kansas City, Mo., and Fayetville, Ark., are headed for a top 10 coldest year, but most major cities east of the Mississippi had just cool or near-average temperatures.

It's been 29 years since any urban area in the U.S. has notched a record cold year. The last metro area to feel the big chill? That would be a three-way tie between Kansas City, Mo., Spokane, Wash., and Boise City, Idaho, in 1985. That year, incidentally, is also the last time the globe experienced a colder-than-average month, with February 1985 taking the honors.

And when it comes to global record coldest year, you'd have to go back even further. Way further in fact. It's been over a century since the world's coldest year on record with 1909 setting the record and 1911 tying it.

Going back to 1880 — the year recordkeeping began — the global average temperature has risen by 1.5°F. In the U.S., temperatures have risen about 2°F since 1895 with a large portion of that rise coming since 1970. That rise in temperatures has also helped increase the number of daily record highs set compared to record lows. If greenhouse gas emissions continue unabated, the U.S. average temperature could climb up to another 10°F by the end of the 21st century.

You May Also Like:
Washington State Offers Ambitious Cap-and-Trade Plan
The Year’s 7 Most Telling Images From Space
Fate of Earth’s Ice Comes Further Into Focus
Cheap Gas May Not Mean More Driving This Winter