At the exact hour when the presidency transferred hands, the Obama administration’s climate and energy webpages became some of the first casualties of the new Trump administration.

In their place is an “America first” energy plan, which talks at length about tapping fossil fuel resources in the U.S. but makes no mention of climate change or renewable energy. Investing in the latter will be crucial to avert catastrophic changes to the world.

Obama's climate page has been sent off to the archive.

In fact, the only mention of clean energy is of “clean coal technology,” which has thus far proven to be impossible at the scale needed to combat climate change. There is a lone reference to protect “clean air and water,” but with no specifics. Moreover, by failing to consider renewable energy as part of its plan, the Trump administration could actively contribute to sullying the air and water not just in the U.S., but around the world.

The plan also explicitly states that it will eliminate the Climate Action Plan and Waters of the U.S. rule, both of which are executive orders that have been used to help curb carbon pollution.

The Trump administration claims that eliminating these rules will help increase wages by $30 billion over the next seven years, a number that comes from a December 2015 report put out by the conservative think tank Institute for Energy Research. Economists from around the world, however, have strongly recommended that climate action would save trillions of dollars in losses.

Trump’s plan also calls for tapping $50 trillion in shale, oil and natural gas reserves, an action that would likely bring the world perilously close to eating through its carbon budget and causing climate change impacts to spiral out of control. 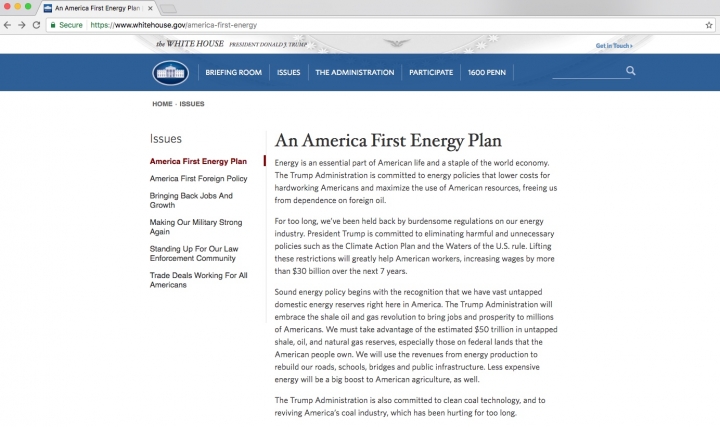 The America First Energy Plan is Trump's replacement for Obama's climate and energy pages. It makes no mention of climate change or renewable energy.

The changes to the White House website are just the first volley of what portends to be an all-out war on climate science and clean energy under the Trump administration. Reports indicate that important metrics for gauging both the impacts of climate change and costs are at risk of disappearing. At the Department of Energy, offices that deal with clean energy technology are also reportedly on the chopping block.

That stands in contrast to Obama, who put a heavy emphasis on his climate change and clean energy legacy. He implemented the Clean Power Plan, signed the Paris Agreement and made the case for a world that runs on renewable energy. The pages chronicling climate change and his policies to deal with it have been archived. Now Trump — who has denigrated climate findings — is poised to undo most of the work those pages documented.

That means what’s happening on Day 1 may just be a sign of what’s to come over the next four years.