Squat mangrove forests that seem at first blush to simply eke by along the coasts of Baja California are sitting on a big secret — one with sweeping implications in an era of accelerating climate change. 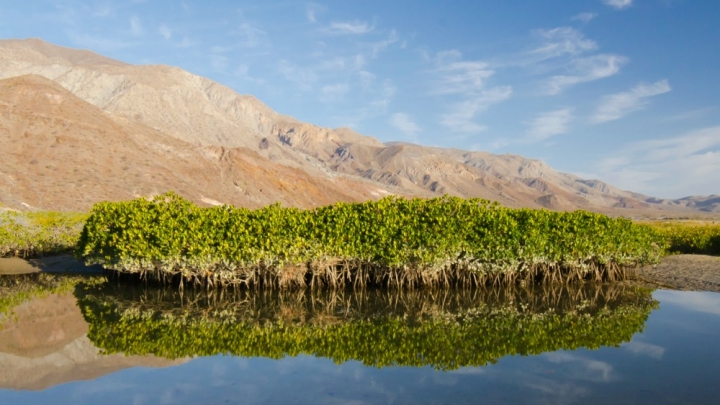 The peninsula’s low-growing mangrove forests harbor at least as much carbon as towering mangrove forests found elsewhere, scientists led by Scripps Institution of Oceanography reported Monday in the Proceedings of the National Academy of Sciences — and more carbon for every acre than many of the world’s forests.

“This scrawny forest that you wouldn’t think twice about actually had a lot of carbon,” said Matthew Kirwan, a coastal ecologist at the Virginia Institute of Marine Science. He wasn’t involved with the study, which he said relied on “well established” methods for estimating carbon content.

Despite occupying just 1 percent of desert-filled northwestern Mexico, the region’s dumpy mangrove forests were found to store 28 percent of the region’s carbon, the researchers discovered.

“That means that the appearance of the mangroves above ground is not indicative of how much carbon it can sequester into the soil,” Kirwan said 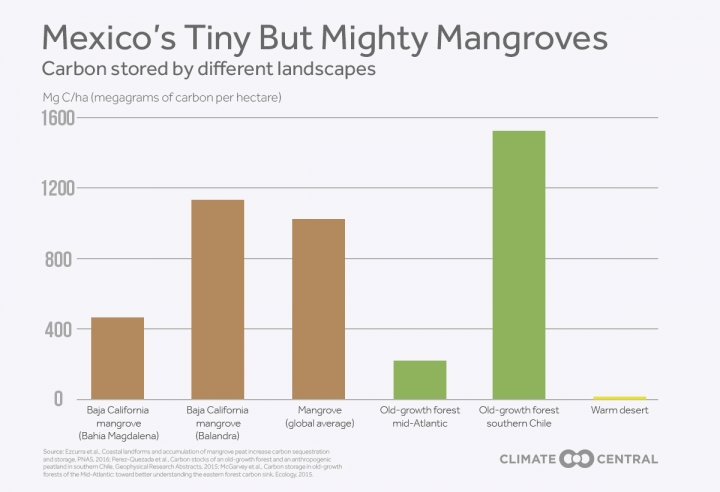 The secret is in the soil, where almost all of the carbon is stored.

Following soil sampling, it was estimated that the 300,000 acres of mangrove forests growing in the region store as much carbon as is released in a year by 60 million American cars.

“These forests have been growing on top of themselves for more than 2,000 years,” said Octavio Aburto-Oropeza, an assistant professor at Scripps whose lab led the research.

As seas have gradually risen, even before humans began superheating the planet, the mangrove forests of Baja California either migrated inland or grew on top of themselves, Aburto-Oropeza said.

As successive generations of mangroves grew to replace those that drowned, rotting roots and leaves produced thick layers of peat that’s rich in carbon.

That process locked carbon, which was sucked from the atmosphere by trees and shrubs as they grew, below the ground. It also helped shorelines grow and adapt as sea levels rose. 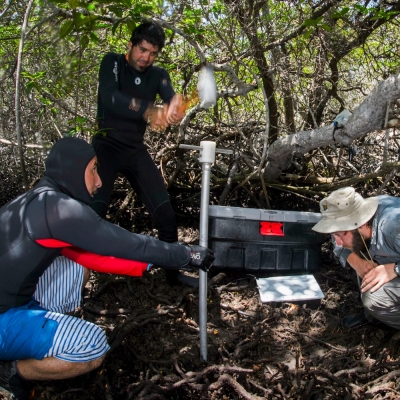 The discovery was a reminder of the value of protecting and restoring wetlands as carbon pollution piles up in the atmosphere, warming the planet and raising its seas.

Although the value of landlocked forests in trapping and storing carbon is widely known and understood, policymakers tend to place less emphasis on “blue carbon” — the carbon that’s trapped in coastal environments.

Not only can wetlands capture and store that carbon, but they can help shorelines adapt to rising seas by building up layers of mud.

About half of all the world’s mangrove forests have been lost in recent centuries, and those that remain tend to be in sickly and degraded states.

“What this new paper says is that even the scrawniest of mangroves are important for carbon sequestration,” Kirwan said. “If you want coastal wetlands to continue to sequester carbon, then it’s important to protect them.”

You May Also Like:
Pacific Ocean Pattern Could Predict U.S. Heat Waves
Climate Change Is Coming For Your Maple Syrup
If a Power Plant Is Built in U.S., It’s Likely to be Renewable