The Most Important Climate Pacts You’ve Never Heard Of

Momentum has quietly been building toward a series of agreements that, when combined, could make a significant dent in the amount of manmade warming that occurs during the next several decades. 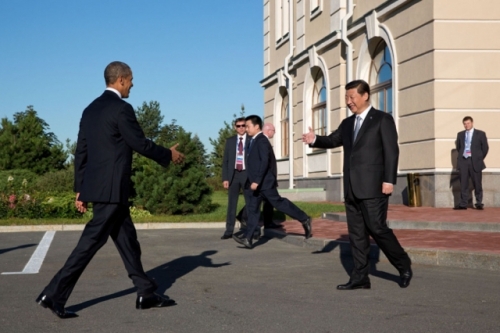 The recent pacts, two of which were reached in St. Petersburg, Russia on September 6, concern global warming pollutants that have a far shorter atmospheric lifespan than carbon dioxide (CO2), a single molecule of which can linger in the air for more than a century. In contrast, emissions of black carbon, or soot, last just days to a couple of weeks before being washed out of the atmosphere. But those emissions exert a strong warming influence both when they are airborne and after landing on bright surfaces such as snow and ice. Other short-lived climate pollutants — including tropospheric ozone, methane, and hydrofluorocarbons (HFCs) — linger in the atmosphere for several years to about a decade.

Some short-lived climate pollutants are helping to melt snow and ice in the Himalayas and the Arctic, altering the timing and characteristics of the South Asian Monsoon season, as well as contributing to millions of premature deaths each year due to air pollution.

Those pollutants have a lower public profile than carbon dioxide, the main culprit in long-term manmade climate change, and consequently, diplomatic efforts to curb short-lived emissions have not been the focal point of most discussions.

While there has been gridlock trying to craft a new global climate treaty to replace the expiring Kyoto Protocol, which mainly concerns carbon dioxide (CO2) emissions, there has been a flurry of activity concerning short-lived pollutants that recent studies have shown play a surprisingly large role in warming the planet.

The recent progress on short-lived pollutants both reflects the frustration leaders have with the U.N. climate talks, and a newfound determination to go after the low-hanging fruit to advance climate policies through innovative diplomatic approaches. If they are successfully implemented, the new agreements could give a much-needed shot in the arm to the U.N. climate treaty process.

For more information on the methods behind this interactive, click here.

Reducing emissions of the short-lived pollutants offers the chance to slow global warming in the near-term while diplomats continue the arduous process of negotiating a longer-term climate treaty, since carbon emissions cuts will be required to limit long-term warming and its myriad effects regardless of how steep any cuts to short-lived pollutants are.

Durwood Zaelke, the president of the Institute for Governance and Sustainable Development in Washington, said that for the past 18 years, countries have focused on making progress on climate change through the U.N. Framework Convention on Climate Change, but that approach has changed.

“We’ve said everything’s got to be done through this monolithic, one approach. And guess what? It hasn’t worked.” Zaelke said. “The world has simply found other ways to get started (to address manmade global warming).”

Recent studies have shown that cutting emissions of short-lived climate pollutants could avoid up to 1.1°F of additional global warming by 2050. Those emissions reductions also could lessen some global warming-related hazards, such as sea level rise, during the next few decades.

According to a study published this year in the journal Nature Climate Change, reducing emissions of a portfolio of short-lived climate pollutants, including soot and methane in addition to HFCs, by 30 to 60 percent by 2050 would slow the annual rate of sea level rise by about 18 percent by 2050. Combining reductions in short-lived pollutants with decreasing CO2 emissions could cut the rate of sea level rise in half by 2100, from 0.82 inches to 0.43 inches per year, while reducing the total sea level rise by 31 percent during the same period, the study found.

The most recent agreements on short-lived climate pollutants have been the biggest climate diplomacy victories yet for the Obama administration, which has placed a high priority on advancing greenhouse gas emissions reductions through multiple avenues outside of the U.N. The administration's international efforts mirror the situation domestically, where staunch resistance to action in Congress has forced the White House to use administrative means, mainly through the EPA, to implement its climate policies.

Meeting on the sidelines of the G-20 summit in St. Petersburg on September 6, President Obama and Chinese President Xi Jinping struck a bilateral agreement to begin working to phase down the production and use of HFCs under the Montreal Protocol, a treaty negotiated in 1987 to address the destruction of the protective ozone layer in the upper atmosphere. The treaty is considered to be one of the most effective international environmental treaties to date, with every country in the world having committed to binding reductions in emissions of substances that deplete stratospheric ozone. Since the treaty entered into force, the ozone layer has been steadily recovering, although a seasonal “ozone hole” still appears each spring over Antarctica.

An unintended consequence of the Montreal Protocol was that it led to the creation and use of HFCs as a non-ozone destroying substitute for chlorofluorocarbons, or CFCs, which were strictly limited and subsequently banned by the treaty. While HFCs do not harm ozone, they do contribute to global warming. 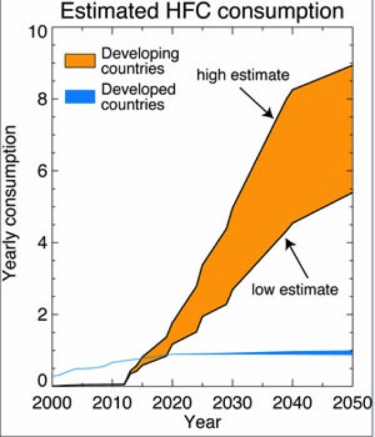 Without cuts in HFC production and use, emissions are projected to skyrocket during the next several decades, mainly in the developing world. By 2050, total HFC usage in developing countries could be as much as 800 percent greater than in developed nations, a 2009 study found.
Credit: NOAA.

Some types of HFCs are so potent that scientists call them “super greenhouse gases.” HFCs are used as substitutes for ozone-depleting chemicals in refrigerators, air conditioners, and industrial applications. With the phase out of CFCs, the use of HFCs has been increasing in recent years, particularly in developing countries such as China and India.

According to Zaelke’s group, a phase down of HFCs under the Montreal Protocol could prevent the equivalent of up to 8.8 billion tons of CO2 emissions per year by 2050, with a cumulative total of prevented emissions of between 76 to 134 billion tons of CO2-equivalent. Drew Shindell, a climate scientist at NASA, said in an email that avoiding the projected explosive growth in HFC use alone could forestall up to 0.2°F of warming by 2050, and up to 0.9°F by 2100.

For the past four years, the U.S., Canada, and Mexico have introduced an amendment to the Montreal Protocol to reduce the use and production of HFCs, but there has not been enough support to pass them. Now that China has agreed to take action on HFCs, environmental advocates hope that other major developing nations that have opposed the amendments, particularly India and Brazil, will follow suit. The leaders of both nations are scheduled to meet with President Obama at the White House during the next two months, and HFCs are likely to be on the agenda, said Andrew Light, a senior fellow at the Center for American Progress, a liberal-leaning think tank.

Light said that taking action now on short-lived pollutants is necessary since even if a new U.N. treaty were to be successfully negotiated in 2015, it wouldn’t go into effect until 2020 at the earliest. That delay would threaten the goal of limiting climate change to less than a 3.6°F global temperature increase compared to preindustrial levels, which was agreed to by world leaders in 2009. The world has already seen about 1.6°F temperature increase since 1901, according to a forthcoming report from the U.N. Intergovernmental Panel on Climate Change.

The cooperation between the U.S. and China on HFCs is also significant because the two countries, which together account for the majority of the world’s carbon emissions, are the biggest players in the U.N. climate talks. “It goes without saying that if the U.S. and China can’t cooperate (on a mitigation plan), then there just won’t be a global mitigation plan,” Light said.

“The fact that China has now endorsed phasing down HFCs under the Montreal Protocol is something few of us would have even thought possible just a few short months ago. But thanks to strong leadership from the President and Secretary of State, it’s a reality,” Murphy said in a statement. “This is an enormous step forward, and one we need to capitalize on in Bangkok next month,” when the parties to the Montreal Protocol meet next.

In addition to the bilateral agreement the U.S. reached with China, on Sept. 6 the G-20 nations also endorsed taking action on HFCs through the Montreal Protocol, while reaffirming their commitment to the U.N. climate treaty process to address CO2 and other long-lived greenhouse gases. Those agreements were largely overlooked by the media as news of Syria dominated worldwide attention..

There has also been unprecedented progress within another new international forum geared specifically toward cutting emissions of short-lived climate pollutants. Created in February 2012, the Climate and Clean Air Coalition to Reduce Short-Lived Climate Pollution now has 33 member nations plus the European Commission, as well as numerous non-governmental organizations. The group has about $60 million in funds to sponsor projects that would address near-term climate change and air quality, such as promoting the use of cleaner-burning cookstoves in the developing world and promoting the use of cleaner diesel engines, both of which are sources of black carbon emissions.

While some critics have argued that the newfound focus on short-lived pollutants may distract attention from the task of cutting carbon emissions, the White House, along with outside observers, dismiss such concerns. What is needed, they say, is progress along any avenue possible at this point, given the dire state of U.N. treaty talks ever since world leaders failed to produce a new climate treaty at a summit in Copenhagen in 2009.

“I don’t think this is a distraction. I think the U.S. and other countries see daylight” here that they don’t see within U.N. climate talks, Light said.

“Climate change is a complex issue, and one that will require the U.S. government to walk and chew gum at the same time. We can pursue action on HFCs under the Montreal Protocol while simultaneously pushing for a strong agreement from the UNFCCC,” Murphy said, referring to the U.N. climate talks. “Not all climate pollutants were created equal, and it behooves us as responsible policymakers to move fast in reducing short-lived climate pollutants.”