A new study shows that there is at least a 76 percent likelihood that an El Niño event will occur later this year, potentially reshaping global weather patterns for a year or more and raising the odds that 2015 will set a record for the warmest year since instrument records began in the late 19th century.

The study, published on Monday in the Proceedings of the National Academy of Sciences, builds on research put forward in 2013 that first proposed a new long-range El Niño prediction method. 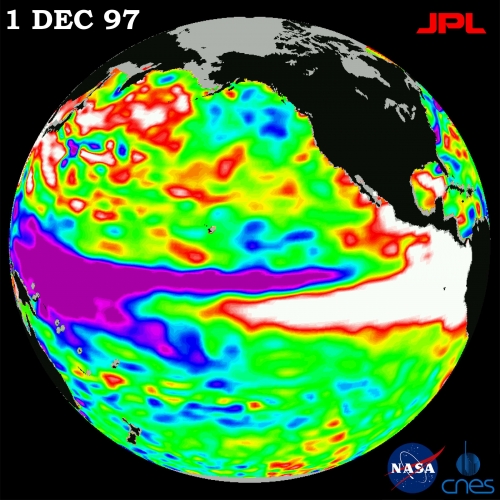 Although they occur in the equatorial tropical Pacific Ocean, the effects of El Niño events can reverberate around the globe, wreaking havoc with typical weather patterns. El Niños increase the likelihood for California to be pummeled by Pacific storm systems, for example, while leaving eastern Australia at greater risk of drought. Because they are characterized by higher than average sea surface temperatures in the equatorial tropical Pacific Ocean, and they add heat to the atmosphere, El Niño events also tend to boost global average temperatures.

By acting in concert with manmade greenhouse gases, which are also warming the planet, calendar years featuring a strong El Niño event, such as 1998, can more easily set all-time high temperature records.

Today, scientists can only reliably predict the onset and severity of El Niño events by about 6 months ahead of time. And this lead time may actually decrease due to Congressional budget cuts for ocean monitoring buoys that provide crucial information for El Niño forecasting.

The new study, by an international group of researchers, takes a starkly different approach to El Niño forecasting compared to conventional techniques. While the forecast models in use today tend to rely on observations of the ocean conditions and trade winds that generally blow from east to west across the tropical Pacific, the new method relies on an index that compares surface air temperatures in the area where El Niño events typically occur with temperatures across the rest of the Pacific.

The researchers found that a strong link between air temperatures across the Pacific and air temperatures in region where El Niño forms appears about one calendar year before an actual El Niño event. Taking advantage of this observation, the scientists devised a forecasting index based on the strength of the links between temperatures in and around the El Niño region. This index, the study said, points to a high likelihood of an upcoming El Niño late in 2014.

“Our approach uses another route,” said study coauthor Armin Bunde, a scientist at the Institute for Theoretical Physics in Giessen, Germany, in an email conversation. “We do not consider the water  temperature in a specific area of the Pacific Ocean, but the atmospheric temperatures in all areas of the Pacific.”

While the the study claims to be more definitive than other forecasts, projections derived from ocean- and statistically-based models from the National Weather Service and the International Research Institute for Climate and Society (IRI) at Columbia University already show increasing odds, to the tune of twice the average risk, of an El Niño starting in the late summer or early fall as well.

Some leading El Niño forecasters were skeptical of the new study, in part because it puts forward a technique based only on statistics, with no improved understanding of the underlying physics of the Pacific Ocean and atmosphere. Bunde told Climate Central that he and his colleagues have yet to discover the physical connections between the rest of the Pacific and the El Niño region, but that they are still investigating.

“This is classic bravado — they make a forecast: if it is wrong, everyone forgets; if they are right, they get big points. In the meantime, people cite their papers,” said Lisa Goddard, director of IRI and a senior scientist there. “There is no physical explanation of what is going on.”

“When we give an alarm, the alarm is correct in 3 of 4 cases and false in 1,” Bunde said. “We can forecast El Niño about 1 year ahead. The conventional forecasts have a considerably shorter warning time of about 6 months, with a lower hit rate than our method. The disadvantage of our method is that we cannot predict the strength of the El Niño event. But we hope to overcome this shortage of our algorithm in the near future.”

Bunde said the extra 6 months of warning time could have significant economic benefits, since it covers an entire “agricultural cycle,” thereby giving farmers more time to adapt to wetter or drier than average conditions.

In the study, the scientists said they are aware of “the reputational risks” involved with making an El Niño prediction so far in advance. “Should our alarm turn out to be correct, however, this would be a major step toward better forecasting,” the study said.

However, Anthony Barnston, chief forecaster at IRI, told Climate Central that the new method is not likely to stand the test of time. “This scheme shows a good performance now, but after another 6 years (and 2 new El Niños) it may not look nearly as good, and they will have to change something to restore skill,” he said.