Scientists Turned Back the Clock on Climate Change

The world was a vastly different place 250 years ago. There weren’t 50 states, Taylor Swift feuds or viral videos anywhere in sight.

Another thing that was also less plentiful: carbon dioxide in the atmosphere. Since then, CO2 has risen and with it, a host of other impacts have befallen our planet. That includes the rapid acidification of our seas at a rate unseen in at least 300 million years.

Rates of ocean acidification every 10 years since 1800 and projected through 2100.
Credit: Tobias Friedrich/University of Hawaii

The change in chemistry has put stress on coral reefs, but just how much has been hard for scientists to quantify. Until now.

Researchers have turned back time by piping less acidic water over a small part of the Great Barrier Reef to see just what life was like for coral before we started acidifying our seas. They found that rather than climate change being a future problem, it’s here and it’s affecting the world’s coral now.

Specifically, they found that when reef conditions were rewound to conditions similar to 250 years ago, coral were able to grow up to 7 percent faster than they are in their current stress-inducing waters, according to a study published in Nature Climate Change on Wednesday.

“There’s a lot of contributing factors (for coral health); ocean warming, acidification, pollution, fishing,” Rebecca Albright, a postdoctoral researcher at Stanford and head of the new research, said. “This study is the first piece of strong evidence that ocean acidification contributes to the decline in coral reef growth. It’s the first sign ocean acidification impacts are already underway at reefs.”

Prior to Albright’s work, lab experiments were the only way scientists could explore what different levels of acidification could mean for reefs. Albright’s experiment is the first to change ocean chemistry to create pre-industrial conditions along with all the other natural ebbs and flows that occur in the open ocean. 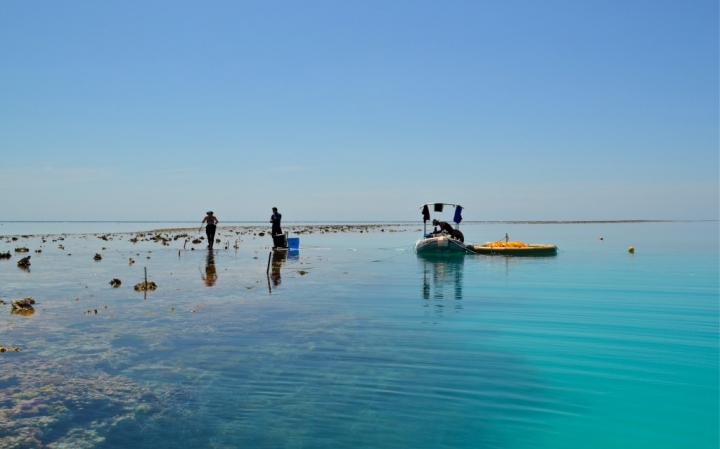 “The results of this study agree well with the lab studies,” Chris Langdon, a reef researcher at the University of Miami, said, noting they accurately convey how much calcification rates have already declined.

The work could be construed as geoengineering — or intentionally altering our world to address climate change. Albright said, however, it would be economically prohibitive for this to be a solution save all the world’s coral reefs (in addition to the ethical questions surrounding geoengineering). It would also fail to address the root cause of climate change.

“Throughout history we have tried to have human intervention strategies that serve as bandaids rather than addressing the root of the problem,” Albright said. “The better approach would be to cut carbon emissions.”

In addition to acidification, rising ocean temperatures are also taking a heavy toll on coral reefs. The world is currently in the middle of it's third major coral bleaching event on record due to this year's El Niño and climate change-driven heat.

A slowdown in reef growth has wide-ranging implications for both ecosystems and people. Reefs provide insulation from storm surge and protect thousands of species of fish. Reefs provide roughly $30 billion in economic benefits to communities that rely on them for fishing, tourism and other services.

Ocean acidification is also taking a toll in other parts of the ocean. Oyster hatcheries in the Pacific Northwest have suffered and research has identified acidification hotspots at other fisheries around the U.S.

Of course, the big question is what happens next. Albright said she’s gotten permission to fast forward time by adding extra carbon dioxide to the waters around the reef and see what oceans will look like 50 years from now if carbon emissions aren’t slowed. Chances are it’s not going to be a pretty picture.