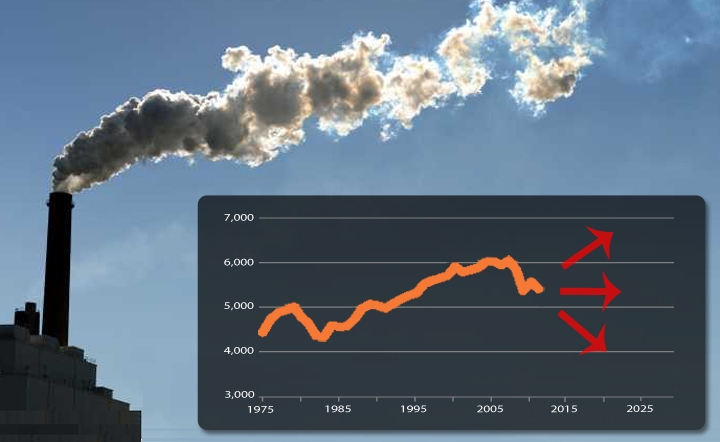 A Climate Central analysis of the American energy economy shows that the nearly 9 percent reduction in annual carbon emissions in the U.S. since 2005 is unlikely to continue in the years ahead without major departures from the ways energy is currently produced and used. 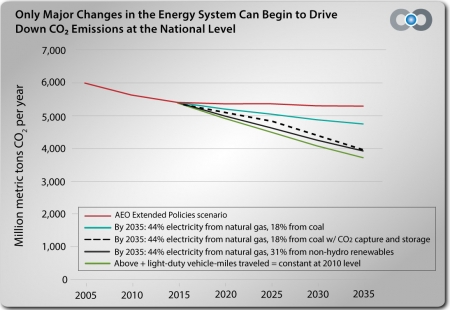 Recent declines in carbon emissions are the result of a combination of factors including the recession, increased natural gas production and the related decline in coal-fired electricity generation, continuing improvements in efficiencies of energy use, and growth in renewables, particularly wind power. The recession, however, appears to be the most significant factor in the decline.

Consequently, as the economy rebounds the fall in emissions is likely to be neutralized or overtaken by growing population and incomes that will drive increased demand for energy-using appliances, air conditioners, TVs, personal electronic devices, cars, and other amenities. In the face of such growth and the 80 percent reliance of the U.S. on fossil fuels for energy today, modest improvements in energy efficiencies and expansions of lower-carbon energy alternatives will not provide the level of change in the energy economy needed for carbon emissions to fall by 2050 to a level that most climate scientists believe is needed to avoid severe impacts of climate change.

- the total number of miles driven by cars and light trucks stays constant at today’s level while the average MPG for new cars increases to over 55 MPG in 2035,

- gains continue to be made in the efficiencies of residential, commercial, and industrial energy-using equipment,

- the share of natural gas electricity ramps up from 29 percent today to 44 percent in 2035, with a corresponding reduction to 18 percent in coal’s share,

- all coal-fired power plants in 2035 are operated with CO2 capture and storage or alternatively, renewables grow from 5 percent of electricity today to 31 percent by 2035, replacing coal;

then U.S. CO2 emissions in 2035 will decline to 38 percent below the 2005 level. Most climate scientists believe that emission reductions of at least 80 percent of the 2005 level will be needed in the U.S. and other industrialized countries by 2050 to avoid the most dangerous impacts of climate change.