Relentless rains falling across Europe over the last week caused the waters of the Seine to burst their banks in the heart of Paris and sent flash floods roaring through towns in southern Germany, crushing cars and houses in their path. 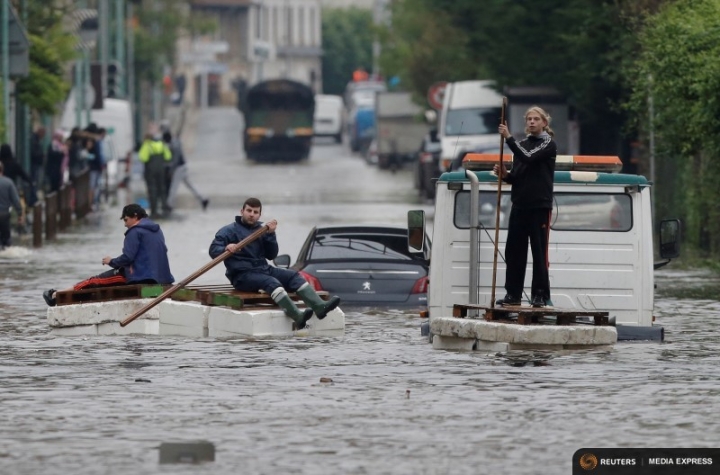 Residents who refused to be evacuated sit on makeshift boats during evacuation operations of the Villeneuve-Trillage suburb of Paris on June 3, 2016.
Click image to enlarge. Credit: REUTERS/Christian Hartmann

As the storms clear out and the deadly floodwaters ebb, a team of scientists has analyzed whether such deluges have become more common in these areas as the Earth has warmed. While they found that such extreme rains are at least 40 percent — and as much as 90 percent — more likely in the areas of France they studied, the results were inconclusive for Germany.

Such a mixed bag isn’t uncommon in the relatively young science of extreme event attribution, as results can be limited by the length of weather observations or the capabilities of climate models. But such efforts are useful in communicating the changing risks of extreme weather to the public, say the scientists, who are working with Climate Central’s World Weather Attribution program.

“Pointing out how risks are rising when an event has just occurred is critical — this is the time to raise awareness,” team member Maarten van Aalst, director of the Red Cross Red Crescent Climate Centre, said in an email.

“Generally, it is key that people are aware of the fact that such extremes do happen, and do pose serious risks, even in developed countries such as France and Germany,” he said. “People typically don’t pay enough attention to the risk of extremes, assuming that the worst won’t happen.”

The rains began falling in parts of western Europe on May 26, thanks to a large low pressure system that parked over the area. The situation played out slightly different in France and Germany: While small thunderstorms popped up across southern Germany and dumped rain over small areas, more widespread rains fell for days across northern France. 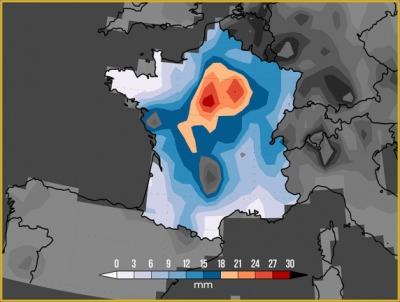 In Gundelsheim in the German state of Baden-Württemberg, 4.8 inches of rain fell in the 24 hours beginning at 6 a.m. on May 29. The onslaught triggered flash floods that tore through towns, sweeping away cars and leaving streets clogged with debris.

In France, the swollen Seine peaked at 20 feet above its normal height on June 3, the highest it has been in more than 30 years. The Louvre was closed so that works of art in the areas most vulnerable to flooding could be moved to safety, while the 16th century Chambord castle to the south of Paris was inundated.

In general, it is expected that heavy downpours will increase as the world warms due to the buildup of heat-trapping greenhouse gases in the atmosphere, because a warmer atmosphere contains more moisture. But other factors, like changes to the circulation patterns that drive storms, can complicate the picture on more regional and local scales. 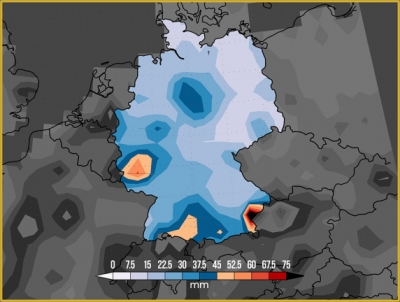 Map of one-day maximum precipitation totals (in mm) up to June 5, 2016, over Germany.
Click image to enlarge.

Both influences are factored into the WWA analysis, conducted by researchers at the Royal Netherlands Meteorological Institute (KNMI), the University of Oxford, France's Laboratory for Climate and Environment Sciences, the Institut Pierre­-Simon Laplace, and the Red Cross Red Crescent Climate Centre.

The analysis uses methods that have already been peer-reviewed, including examining the change in occurrence of such extreme rains in the historical record and in climate models, as well as using finer-scale regional climate models to compare the current climate to one without warming.

Because the meteorological situations differed in France and Germany, the team used slightly different measures. In Germany, where the rains fell over a shorter period, they examined the one-day maximum precipitation for the hardest hit region, while for France, where rains were longer-lasting and more widespread, they looked at the three-day averaged precipitation for the Seine and Loire river valleys.

For France, they found that the torrential rains that fell from May 29-31 in the Seine basin were very rare, happening once in every few hundred years. In the Loire, it was about once every 50 years.

But the risks are increasing in both regions, with such an event at least 40 percent more likely to occur in the springtime with warming, but up to 80 percent in the Seine region and 90 percent in the Loire. 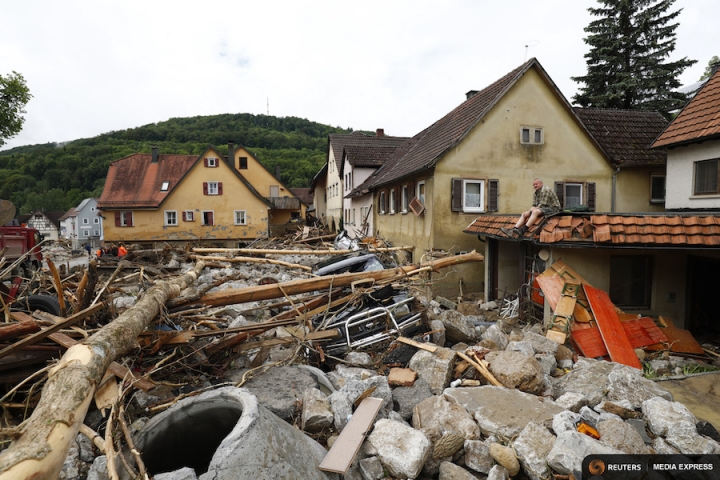 A man looks at the damage caused by the floods in the town of Braunsbach in Baden-Wuerttemberg, Germany, on May 30, 2016.
Click image to enlarge. Credit: REUTERS/Kai Pfaffenbach

For Germany, the rains had a 1-in-20 chance of occurring somewhere in southern Germany in any given year. But while the historical observations showed a decreasing trend, climate models suggested such events should increase. The reasons for the discrepancy are something the team hopes to work out later.

One challenge with storms in Germany is that climate models have trouble accurately depicting such small-scale features, but a new generation of models that should come into wider use within the next year or two do a much better job, meaning that attribution analyses on such events should become more feasible, van Oldenborgh said.

The team also hopes that in future analyses, they can link hydrological models with their analyses to study changes in flood risk more directly.

You May Also Like:
El Niño Had a Good Run, But Now It’s Over
Alaska Continues to Bake, on Track For Hottest Year
Bay Area Voters Approve Tax to Fix Marshes As Seas Rise
Overfishing and Pollution Kill Corals in a Warming World