The government shutdown came to a close after 16 days. Its effect on Antarctic scientific research may last longer, though, as crucial research time was lost in an already brief summer research season.

“With the partial government shutdown now ended, the National Science Foundation (NSF) will restore the planned 2013-14 austral summer U. S. Antarctic Program (USAP) activities to the maximum extent possible,” NSF said in a statement posted on its website. 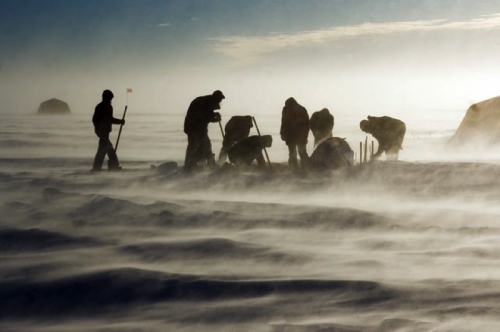 Pine Island Glacier field camp staff attempt to excavate a mountain tent that collapsed during a wind storm. A team of scientists visited the region during the 2012-13 field season to send instruments through the ice shelf to see how the water below may be thinning the ice.
Click to enlarge the image. Credit: August Allen, NSF.

During the 16-day shutdown, the NSF directed all support elements of the Antarctic program to stand down toward “caretaker status.” That meant halting the flow of scientists and equipment to Antarctica for the short austral summer research season, which typically lasts four to five months, and evacuating some employees from U.S. field research stations. Many scientists who had spent years lining up funding and equipment to conduct research in Antarctica were left in limbo, unsure whether their work could go forward.

In addition to keeping tabs on the ice sheet, scientists also make the arduous journey to Antarctica to check up on the health of iconic Antarctic species such as Adelie Penguins, which could see a drop in numbers due to habitat loss and other climate change-related impacts.

Lingering effects of the government shutdown also threaten to cause a gap in the lengthy, continuous datasets that scientists have painstakingly collected during the past several decades, whether it is data on Adelie population numbers, or ice cores that provide clues to Antarctica’s climate history. Introducing breaks in these records makes them less useful and reliable to scientists.

Putting U.S. Antarctic operations, which have an annual budget of about $350 million, on “caretaker status” also created ripple effect of logistical issues for Antarctic researchers from other nations with smaller research programs that rely on U.S. resources such as transport aircraft and other equipment. 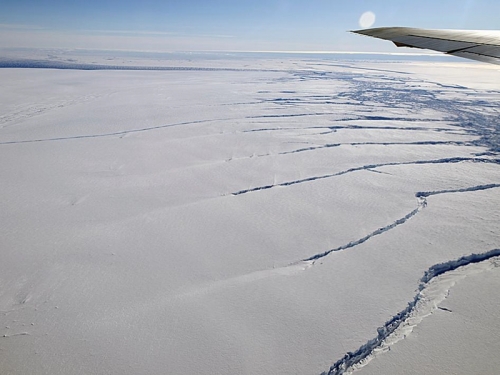 A NASA aircraft flies over the Pine Island Glacier, which contains several large cracks in the ice.
Click to enlarge the image. Credit: NASA IceBridge.

The U.S. has long been one of the leaders of Antarctic research, operating three year-round research stations. While smaller research operations that rely on U.S. suffered, its absence opens the door for scientists from other countries doing major research in the region, such as Russia, China, and the U.K. to get ahead of their U.S. counterparts or even poach talented researchers from U.S. labs.

The potential absence of the U.S. from Antarctic research in 2013 struck many in the scientific community as worrisome and embarrassing. Ralph Cicerone, the president of the National Academy of Sciences, told Politico in an interview that this could be the first year in which the U.S. would be missing from the Antarctic field research season since a 1959 treaty directed that the continent be dedicated to international scientific research.

“A lot of major countries and developing countries, too, have a hand in doing research now in Antarctica. This coming year, the United States is going to be missing. It’s never happened before,” Cicerone said.

Though the two weeks the shutdown lasted might seem like a short period, it’s actually a large chunk of the brief season during which most Antarctic research takes place. As a result, NSF acknowledged that it is not clear whether all the planned research projects for the summer season can still go forward after being put on hold for so long.