SAN FRANCISCO — Giant offshore wind farms could do more than provide electricity for major cities. They could suck the life and the power out of hurricanes barreling toward those cities, too, according to Stanford University research presented Monday at the American Geophysical Union fall meeting.

Stanford civil and environmental engineering professor Mark Z. Jacobson and his research team found that if it was feasible to build tens of thousands of wind power turbines off the shores of some of America’s cities most vulnerable to extreme weather, those cities would see lower wind speeds and less severe storm surges from approaching hurricanes. 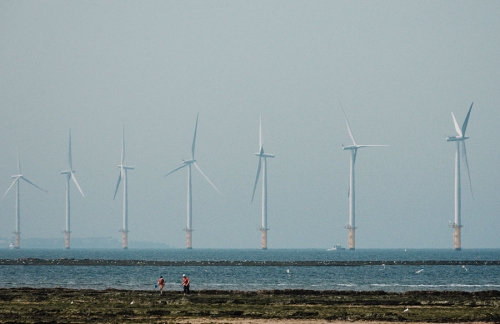 The researchers imagined what would have happened if a massive wall of tens of thousands of wind turbines had been built before hurricanes Katrina and Sandy and ran computer simulations of both storms with and without offshore turbines constructed in their paths.

Hurricane Katrina, which devastated New Orleans and the Louisiana Gulf Coast in 2005, was the costliest and and one of the deadliest hurricanes to ever hit the U.S.

Jacobson's Katrina simulations assumed arrays of 70,000 turbines  — 300 gigawatts of installed power  — had been built 100 kilometers offshore southeast of New Orleans and were designed to withstand winds of up to 50 meters per second, just above the strength of a Category 3 hurricane, or roughly 111 mph.

The simulations showed that the turbines would create a net energy reduction in the atmosphere, slashing wind speeds as energy was sapped from the storm and dramatically reducing storm surge, which is caused by high winds pushing water inland as a hurricane barrels toward the coast.

Wind speeds would have been reduced enough to allow the wind turbines to survive the storm themselves, with winds never reaching 50 meters per second, above which the turbines could topple.

A similar array of wind turbines just offshore of New York and New Jersey could have reduced wind speeds of Hurricane Sandy by up to 29 meters per second, or 65 mph, with a storm surge reduction of about 21 percent, he said.

“If we have large arrays of offshore wind turbines — large walls of turbines — we could dissipate winds and storm surge quite a bit,” particularly in the vicinity of the turbines themselves, Jacobson said.

Jacobson did not address the feasibility or the political and environmental challenges of building such massive offshore wind farms along hurricane-prone coastlines. Proposals for smaller offshore wind farms have generated significant opposition and controversy, especially along Cape Cod in Massachusetts.

A study Jacobson co-authored in 2012 showed that offshore wind power can generate enough power to meet a third of U.S. energy needs.

“You’re generating electricity year-round, so (an array) would pay for itself,” he said Monday.

Jacobson said he has also envisioned constructing turbines worldwide to produce green energy that would meet half the world's energy needs. He said it would require 4 million wind turbines globally to do so.

Asked by an audience member how wind-farm construction on a such a large scale would affect local wind speeds and global weather patterns during normal conditions in the absence of hurricanes and other extreme weather, Jacobson said the large turbine arrays would likely reduce local shoreline wind speeds at most times, but would not likely affect global weather patterns overall, even if offshore wind farms were constructed on a global scale.