NOAA: Climate Change Did Not Cause Calif. Drought

The extreme California drought? Maybe not so much.

A new National Oceanic and Atmospheric Administration study released Monday shows that the 3-year California drought may have been caused by natural variability and not necessarily human-caused climate change. 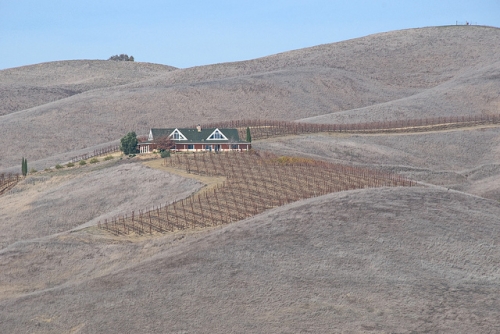 The California drought is devastating agriculture across the state.
Credit: John Weiss/flickr

The study follows a series of studies released in September that were inconclusive about the role of climate change in the California drought, and another published last week showing that the drought is the worst the state has seen in 1,200 years.

The devastating 3-year drought, which began in 2011 and is ongoing despite recent rains, was caused by a high pressure system that was sitting over the West Coast and part of the North Pacific Ocean, driving moisture away from California, report co-author Richard Seager, a professor of oceanography at the Columbia University Lamont-Doherty Earth Observatory in Palisades, N.Y., said.

The persistence of the high pressure ridge was also present in previous long-term droughts in California, some of which were longer than the current drought. The ridge was initially caused by cool sea surface temperatures in the Pacific brought about by a La Niña in 2011, but it persisted even after cool ocean surface temperatures began to warm, the study says.

“Two-thirds of the precipitation deficit in California were due to factors we wouldn’t judge to have long predictability at all,” report co-author Martin Hoerling, a NOAA research meteorologist in Boulder, Colo., said. “They resulted from the randomness of the atmosphere.”

Despite the extreme drought, winter precipitation in California has followed no particular trend since 1895 and is expected to increase because a low pressure system is expected to park itself over the North Pacific each winter, driving moisture into the state, Hoerling said.

Even though the drought may not have been caused by climate change, the drought’s effects may be worse because of hotter temperatures on land that may be caused by global warming, the study says.

Kevin Trenberth, senior scientist at the National Center for Atmospheric Research in Boulder, called the study useful, but said it comes up short in many ways.

“I would contend that all droughts are largely natural in the sense that they arise from internal variability in the atmosphere-ocean system,” he said. “But this study completely fails to consider what climate change is doing to water in California. It completely misses any discussion of evapotranspiration and the increased drying associated with global warming.”

The extra heat in the atmosphere from global warming enhances drying on the surface and increases the risk of heat waves, worsening the effects of a drought, Trenberth said.

But the study is useful because it shows that most of what caused the drought and allowed it to persist was predictable, he said. 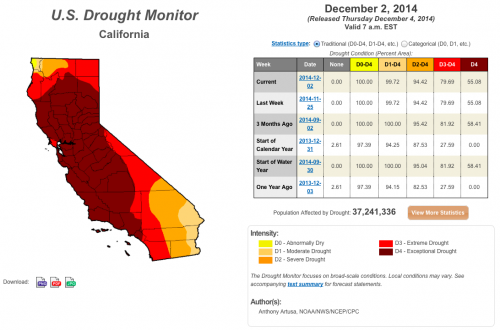 Trenberth said it’s puzzling that the study ignores that 2013 was California’s driest year on record, and the study is contradicted by the research published last week concluding that the drought is unprecedented in 1,200 years.

The lead author of that study, Woods Hole Oceanographic Institution researcher Kevin Anchukaitis, said that he believes the conclusions of his study and the NOAA study are actually complementary because both studies use different techniques and different information sources.

Anchukaitis used tree rings to examine drought conditions in California between the years 1293 and 2014. Using another metric, his study also concluded that 3-year-long droughts are common throughout California’s history. There have been 66 such major droughts since 1293, but none so severe as the current one.

“So, I actually think the conclusions about the precipitation part of the drought agree with one another,” he said, adding that precipitation for 2012 to 2014 in California was not outside the range of natural variability.

Hoerling said that his team isn’t dismissing global warming, and recognizes that recent high temperatures in California have been setting records.

“The (lack of) precipitation was the essence of this drought,” Hoerling said.

You May Also Like:
Warm Water Invasion Is Fueling Striking Antarctic Ice Melt
WMO Warns Lima Delegates 2014 May Be Hottest Year
Clues Show How Green Electricity May Be in 2050
Climate Investments ‘Falling Short’ of 2°C Goal
Here’s How the U.S. Can Adapt to Climate Change