The signs are there that an El Niño event may be on the way, arriving as early as this summer, the World Meteorological Organization (WMO) said Tuesday.

If you’re already as tired of hearing about El Niño as you are about the latest Kimye news you’ve got a long few months ahead of you, as meteorologists keep a paparazzi-like watch out for the climate phenomenon. El Nino’s are characterized by warmer-than-average sea surface temperatures in the central and eastern tropical Pacific and are so thoroughly monitored because they can influence weather patterns around the world. 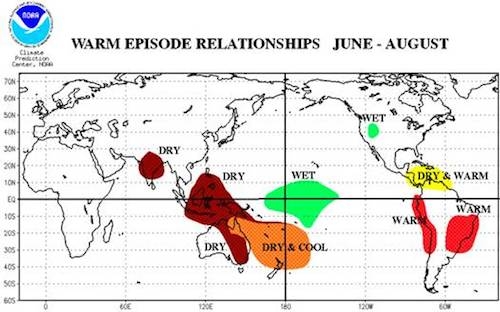 Typical effects seen when an El Nino is in effect during the summer months.
Credit: NOAA

The full development of an El Nino can, for example, dampen the development of hurricanes in the Atlantic Ocean basin, spike global temperatures and shift precipitation patterns.

Drought-weary Californians have pinned their hopes for water to the development of a strong El Niño, which in the past has brought copious rainfall to the state — though the link is tenuous and rain isn’t guaranteed.

“El Niño and La Niña are major drivers of the natural variability of our climate. If an El Niño event develops — and it is still too early to be certain — it will influence temperatures and precipitation and contribute to droughts or heavy rainfall in different regions of the world,” WMO Secretary-General Michel Jarraud said in a statement. (La Niña is the opposite phase of the El Niño-Southern Oscillation, or ENSO, phenomenon, when waters in the same part of the tropical Pacific are colder-than-average. The last La Niña lasted from June 2010 to May 2012; it has been more than 48 months since the last El Niño.)

El Niño is also linked to warmer average global temperatures, which could push 2014 or 2015 to be a record warm year, experts have said.

“The combination of natural warming from any El Niño event and human-induced warming from greenhouse gases has the potential to cause dramatic rise in global mean temperature,” Jarraud said.

The main clue scientists have observed that suggest an El Niño is on the way are unusually warm waters below the ocean’s surface, which are similar to those typically seen at the onset of an El Niño event, the WMO said. 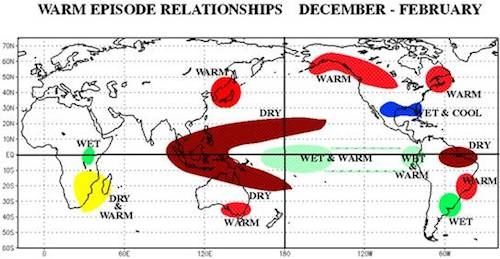 Typical effects seen when an El Nino is in effect during the winter months.
Credit: NOAA

The warm sub-surface temperatures are the result of what is called a Kelvin wave. In ENSO-neutral conditions, when neither an El Niño nor a La Niña is in effect, easterly trade winds blow across the ocean, “literally pushing water toward the western Pacific,” said Michelle L’Heureux, a meteorologist at the Climate Prediction Center, part of the National Oceanic and Atmospheric Administration (NOAA).

That push keeps sea level heights higher in the western Pacific, but when the winds weaken, that warm water, like a ball on a slope, runs back toward the eastern Pacific — that is what is known as a Kelvin wave.

“This Kelvin wave is quite warm for the March average,” L’Heureux told Climate Central, adding that it was the warmest subsurface temperature observed in March in the eastern tropical Pacific since 1979.

Another caution is that warmth this early in the spring has a much smaller correlation to El Niño conditions developing in the fall than conditions in later seasons. “March is not what I would call a terrific indicator to exactly what ENSO will do,” L’Heureux said.

There is also, though, “strong model support” for the development of an El Niño, she said.

NOAA’s own forecasters issued an El Niño Watch on March 6 and have said there is a greater than 50 percent chance of an El Niño developing by summer and a 2-in-3 chance of one by the November-January timeframe. How intense any El Niño will be is also something forecasters can’t gauge this early on.

It was just 2 years ago that ENSO forecasts were undercut when a developing El Niño fizzled out. L’Heureux said such events teach forecasters the importance of stating probabilities in their outlooks. “We will never come out and say it’s 100 percent,” she said.

You May Also Like
March Was Coldest in U.S. Since 2002
March Was 4th Warmest on Record Globally
Huge Hole in Earth’s ‘Detergent’ Layer Found Over Pacific
Major Greenhouse Gas Reductions Needed by 2050: IPCC