Folks across the eastern U.S. could be forgiven for thinking they’d pulled a Rip van Winkle and woken up in October on Wednesday morning. Temperatures dipped down overnight into the 60s, 50s and even 40s, setting record lows left and right. 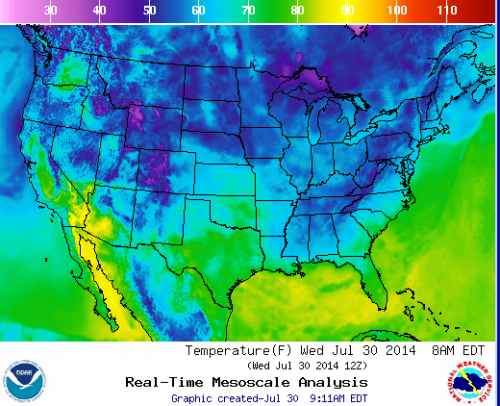 Temperatures across the U.S. at 8 a.m. ET on July 30. An incursion of cold, Canadian air sent low temperatures to record levels in some areas of the East.
Credit: NOAA

The chill in the air comes courtesy of yet another bout of cool Canadian air that dipped down over the area east of the Rockies earlier this week, creating decidedly un-summerlike temperatures at what is normally the hottest time of the year for many locations and spurring some severe weather, including a rare Boston-area tornado.

“We’re in the heart of that hottest normal time of the year and it’s anything but that,” Bruce Terry, lead forecaster for the National Weather Service, told Climate Central on Monday.

The cool conditions in the East contrasted, as they have nearly all year, with baking conditions in the West, which have exacerbated the effects of California’s epic drought and helped fuel wildfires. This temperature pattern is occurring over a background warming fueled by the accumulation of greenhouse gases in Earth’s atmosphere that are making record lows overall less likely and record highs more common. The pattern the U.S. has seen is also one scientists say could be more common in a warming world.

Numerous National Weather Service offices and other local meteorologists took to Twitter and other media to note the astonishing thermometer readings across the East: Nashville tied its record low for July 30 of 58°F (originally set in 1965), according to the local NWS office. Dulles International Airport in Washington, D.C. dropped to an incredible 48°F, shattering the record low of 51°F set in 1981, while Baltimore’s airport hit 55°F, just beating the record of 56°F set in 1997, the Capital Weather Gang reported.

In contrast, cities on the West Coast have been sweltering. San Francisco is set to see its warmest July on record and even hit an uncharacteristic 90°F on July 25, a full 12°F above normal, Dennis Mersereau at The Vane wrote. Portland, Ore., hit an even more sizzling 99°F this month and is on track for its sixth warmest July.

The pattern behind this stark temperature divide is one in which large waves in the jet stream send a deep trough, or area of low pressure in the atmosphere, diving down over the East, while a ridge, or high pressure area, parks itself over the West. The same pattern was in play earlier in July and during much of the winter months and into spring.

While the winter and spring events were linked to an incursion of the polar vortex — an upper-level atmospheric feature of cold, low-pressure air surrounded by strong winds that circle the pole ­— southward, the National Weather Service has been reluctant to link the summer cold spells to the same cause. Other meteorologists, however, have said that the events do indeed have a polar component.

Why the country keeps seeing this particular pattern this year, forecasters can’t say.

Jake Crouch, a climatologist with the National Climatic Data Center who helps conduct monthly investigations of major climate events in the U.S., said in an email that his team will likely do a detailed analysis of the July event to be released with next month’s update.

The pattern has affected the overall average temperatures of the U.S. in 2014, with the first four months of the year ranking as the coldest since 1993, according to the most recent State of the Climate update from the National Oceanic and Atmospheric Administration. But the warmth in the West — where California has recorded its hottest first six months to a year ever — has balanced out the cold, putting the year as a whole in the middle of the pack for temperature records going back a little more than a century.

And the situation in the U.S. is only one part of the globe, which just experienced its hottest May and June on record. The year to-date for the planet ranks as the fifth warmest.

As the world heats up because of the increasing concentrations of carbon dioxide put into the atmosphere by humans, the building warmth actually stacks the deck for record highs and against record lows, meaning the record lows seen across the East this week will be increasingly less likely to occur.