Amid one the West’s worst droughts in centuries, more than 5,600 wildfires scorched more than 600,000 acres last year in California alone.

It could happen again.

With drought showing signs of worsening across the West and Upper Midwest, the Forest Service anticipates that it may spend up to $1.6 billion fighting wildfires in 2015, in a fire season that is expected to be worse than normal. 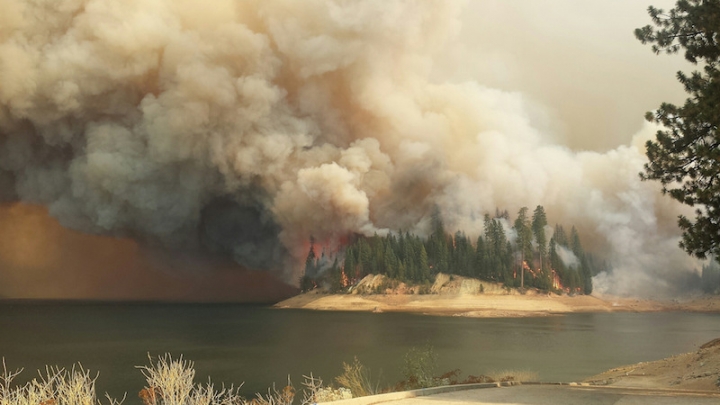 The King Fire in the Eldorado and Tahoe National Forests in 2014.
Credit: USFS/flickr

“We anticipate another active fire year, underscoring the need to reform our wildfire funding,” U.S. Forest Service Chief Tom Tidwell said Tuesday in testimony before the Senate Committee on Energy and Natural Resources.

To fight the fires, it may be necessary to divert funding from agency wildfire risk reduction programs such as prescribed burning and forest thinning, Tidwell said. Over the past decade, the Forest Service has spent an average of $1.1 billion to fight wildfires each year.

Drought, likely influenced by climate change, is one of the biggest factors affecting the spread of wildfires in the West. Climate change has helped spike the cost of fire suppression in the West as fire seasons have grown longer, forests have become wracked by drought and wildfires have become larger, more frequent and more severe.

On average, wildfires burn six times the acreage they did 40 years ago, while the annual number of wildfires over 1,000 acres has doubled from 50 during an average year in the 1970s to more than 100 each year since 2002, Climate Central research shows. 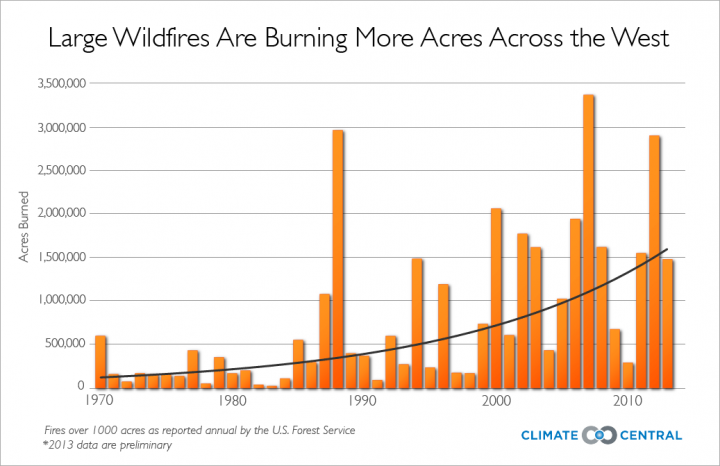 The highest wildfire potential through August is right where the drought is the worst — in California, Oregon and southern Washington, according to the latest federal wildfire forecast.

The weather throughout the West is shaping up for an intense wildfire season, according to the most recent seasonal National Oceanic and Atmospheric Administration seasonal forecast.

Temperatures in every Western state except for Colorado and New Mexico are expected to be above average through July at the same time drought is expected to persist or intensify in every West Coast state, Arizona, southern Utah, Minnesota, South Dakota and Wisconsin.

Colorado and New Mexico, which have been scorched by destructive wildfires and drought over the past few years, could get a reprieve this year from above-normal wildfire activity. The long-term forecast calls for above-average rainfall in most of the Rocky Mountain states, with below-average temperatures in parts of New Mexico and Texas.

You May Also Like:
Wildfires in Western U.S. to Increase with Climate Change
Area Burned By U.S. Wildfires Expected to Double by 2050
Australia’s Bushfires and the Role of Climate Change