The U.S. is now lagging behind China as investments in renewables over the last decade have increased dramatically, according to the Renewables 2014 Global Status Report released Tuesday by the Paris-based Renewable Energy Policy Network for the 21st Century, or REN21. Much of the world's money into these renewables is flowing from China, as the country looks for  could help slash poverty, expand economic development and solve air pollution problems, the report found.

Investments in renewables are an important indicator of trends in moving away from fossil fuel-intensive energy toward less-polluting energy sources that will help mitigate the effects of climate change. Investments rose steadily over the last decade, increasing from $39.5 billion in 2004 to $249.5 billion in 2012. But 2013 saw a drop in investments to $214.4 billion, though if hydrpower is included, the number jumps to $249.4 billion.

The drop in investments in 2013 occurred because of uncertainty over renewables incentives in the U.S. and Europe. In 2012, the U.S. saw a rush of wind power installation ahead of the expiration of the Renewable Electricity Production Tax Credit. In 2013, new wind power installation fell 90 percent, according to Bloomberg New Energy Finanace, the source of some of the report's data.

While the report provides an update on the overall health of the renewable energy sector worldwide, REN21 also included an interactive map that illustrates the growth and expansion of renewables worldwide. Clicking on it sheds lights on solar, wind and hydropower investments and generating capacity by country over time. 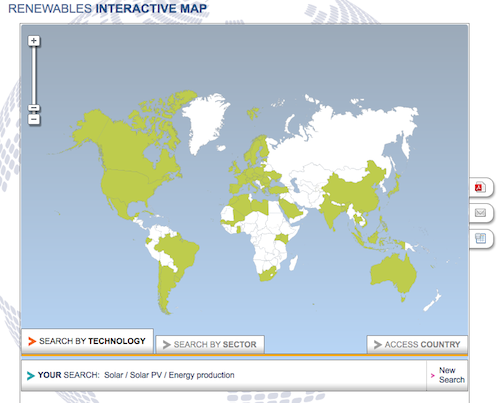 Global solar growth has averaged 55 percent each year between 2008 and 2013, according to the report.

The U.S. comes in behind China for overall investments in renewables as well as renewable power generating capacity. However, the U.S. also leads the world in concentrated solar power production capacity, biodiesel production and fuel ethanol production.

Japan, the United Kingdom and Germany round out the top five investors in renewables.

You May Also Like
The Ocean is Heating Up for Hurricane Season
How Will We Know When El Niño Finally Arrives?
Here’s How Much U.S. Summers Have Warmed Since 1970
EPA Aims To Slash Power Plant CO2 by 30 Percent