With worldwide food production expected to double by 2050, it’s almost inevitable that agriculture is going to have to expand in a warming world with a growing population. A new study suggests that if new farmland is created carefully, billions of tons of carbon emissions could be saved.

In many places across the globe, new farmland is carved out of forests and other environmentally sensitive areas, the clear-cutting of which releases carbon into the atmosphere. When left intact, biologically diverse forests store vast amounts of carbon and provide habitat, water filtration and numerous other benefits known as “ecosystem services.” When replaced by farms, the carbon storage and benefits are lost. 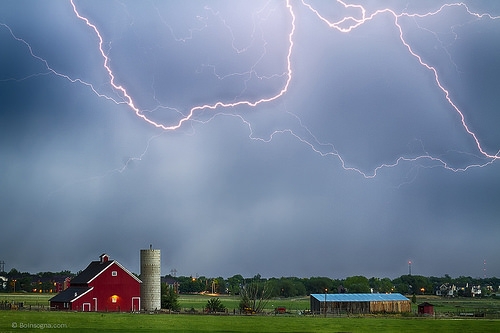 The new study, by a University of Minnesota team led by Justin Andrew Johnson, shows that about 6 billion tons of carbon can be saved worldwide — 350 million tons of that from the U.S. — by expanding agriculture on the edges of regions that are already heavily farmed and confining new farming to specific areas across the globe.

“We found in our study that carefully locating where agriculture should expand has a large impact on the amount of carbon storage that will be lost,” Johnson said via email. “The loss of carbon storage, in turn, affects how severe climate change will be.

“A changing climate may also make meeting future calorie demands more difficult by lowering yields,” he said. “Our study did not address how agriculture will have to adapt to this last effect, but did show how important it is to consider carbon storage costs when expanding cropland. If policymakers and land owners expand in the way we identified, climate change damages (to society) will be reduced by approximately $1 trillion.”

Johnson and his team set out to find regions where the most food in terms of consumable calories can be grown relative to the amount of carbon stored there, a figure called crop advantage. The team placed a value on carbon storage potential using a figure called the social cost of carbon, which puts a price tag — about $37 — on the damage society sustains from each ton of carbon dioxide released into the atmosphere. The team labeled the current approach of farming where crop advantage isn’t necessarily taken into account the “business as usual” approach.

The regions best suited for agricultural expansion are areas on the edges of regions that are already heavily farmed, the team found. That’s because the expanding existing farmland along its edges produces more calories while limiting the loss of carbon from woodland destruction.

Those regions include the southern edge of the Himalaya in India, the Nile River Valley in Africa, and much of northeastern China.

Additionally, some of the largest areas of ideal low-climate-impact agricultural expansion are in the U.S.

“Minnesota, Illinois and Wisconsin have high crop advantage because they have relatively high crop yields, but more importantly, because they have relatively low amounts of carbon storage that would be lost,” Johnson said. “The reason for this is that the land in these states is primarily grassland and pasture, which store much less carbon than forests. Harnessing the high crop advantage in these areas by converting grassland and pasture to cropland has other serious costs apart from carbon storage loss, but we will address these costs in upcoming research.”

The study assumes that 75 percent of future demand for food will be met with increases in crop production, which is in line with United Nations estimates. The current world population stands at 7.2 billion, and the UN expects that to climb to 9.6 billion by 2050.

But with climate change shifting agricultural producing regions away from the equator, crop production may actually decrease. 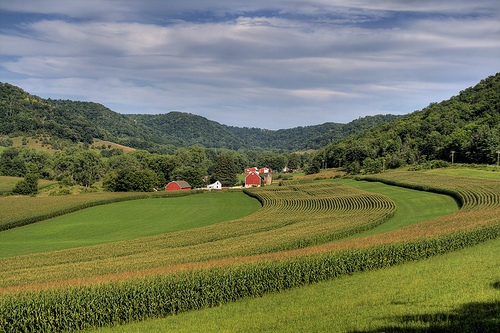 That makes careful expansion of farming even more important so that more crops can be produced with as little impact to the climate as possible, he said.

Johnson’s study concludes that in order for agricultural production to expand in the most climate-sensitive way is for people and political leaders to understand the value of ecosystem services provided by forests worldwide.

Otherwise, there will be little push for carbon policies such as establishing a price for carbon storage and little incentive for landowners to incorporate carbon or the value of other ecosystem services into their decision-making, the study says.

Marshall Burke, an agricultural and resource economist at the University of California-Berkeley and a fellow at the Center on Food Security and the Environment at Stanford University, said Johnson’s paper isn’t fully convincing.

“I think the paper is a nice thought exercise, suggesting that where agricultural productivity expands can have a very large effect on agriculture’s impact on the climate,” Burke said.

He called Johnson’s business as usual scenario a “straw man” because it might work better if business as usual meant that farmers are expected to expand farming into areas that are best suited for agricultural production but aren’t being farmed yet.

“In the absence of policy intervention, do we really expect to see a proportional expansion of agricultural land around the world?” Burke said, adding that Johnson hasn’t made a strong enough case that agricultural policy changes need to be made.

“I think they need to do more to convince us that we have a clear picture of the bad things that will happen in the absence of that policy change,” Burke said.

The study, “Global Agriculture and Carbon Trade-offs,” was published Monday in the Proceedings of the National Academy of Sciences.