Europe will cut its greenhouse gas emissions by 40 percent by 2030, compared with 1990 levels, the toughest climate change target of any region in the world, and will produce 27 percent of its energy from renewable sources by the same date.

The landmark deal was reached after grinding negotiations dragged on to the deadline of 11:00 am on Wednesday, as warring factions within the European commission and member states fought over whether to water down the proposals. 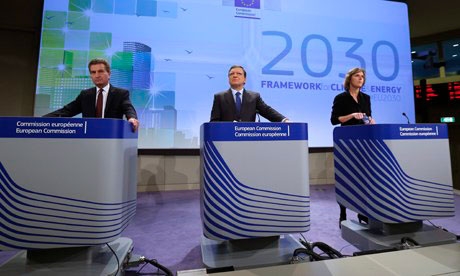 The EU is now the first to set out emissions reduction targets ahead of a crunch meeting of world governments in Paris in 2015 that will decide a global framework for avoiding dangerous levels of global warming. Every other major developed and developing economy is expected to set out its own binding national emissions target within the next year, for the United Nations (U.N.) talks to go ahead.

Ed Davey, the UK's energy and climate change secretary, bitterly opposed the renewable energy target, but was overruled as big member states including Germany, France and Italy backed it.

Davey said: “Today's proposals are a step in the right direction towards an ambitious emissions reduction target for Europe. They provide the flexibility to tackle climate change in the most cost-effective way, so that British consumers aren't paying over the odds to go green.” But he added that “the UK remains concerned about any renewables target.”

Europe's emissions trading system will also be reformed as part of the 2030 energy and climate package, with a more flexible mechanism to allow the surplus of carbon permits to be curbed, and member states will have an “indicative” target — that is, not legally binding — of improving energy efficiency by 25 percent by 2030.

Disputes behind the scenes meant that the unveiling of the blueprint, the biggest climate initiative delivered by Brussels since 2008, was delayed by 40 minutes.

The targets are weaker than many green campaigners had called for, but stronger than the alternatives that some member states and commissioners were championing right to the final stages of the negotiations. The Guardian understands that some commissioners were calling for an emissions target of only 35 percent, compared with 1990 levels, while the UK failed to gather support for its own opposition to a binding renewable energy target. Studies show that the EU's emissions are likely to be 25 percent below 1990 levels by 2020, making the targets easier to meet. 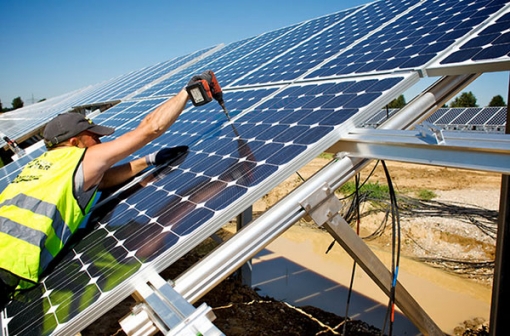 Construction of a ground-mounting photovoltaic system in Bavaria, Germany, 2009. Germany is the world leader on renewable power and is implementing a radical energy shift away from nuclear into renewables.
Credit: Windwärts Energie Gmbh

Jose Manuel Barroso, president of the European commission, told a press conference on Wednesday: “We want this package to be owned by all Europeans. We believe that this package is ambitious but realistic.” He said Europe had shown it was a leader on tackling climate change.

The measures will be debated by member state governments and the European parliament, before they can be fully accepted. The European council, made up of the heads of state or government of the EU member states, will discuss the proposals in March.

Connie Hedegaard, the EU's climate chief, hailed the compromise. She said: “If all other big economies in the world do a relatively ambitious effort equal to what we are now proposing, the world will be in a better state when it comes to combating climate change.”

However, reaction to the deal was mixed. The European Wind Energy Association said that the renewables target included in the deal, which had been in doubt until the final moments, was too weak and would cost potential jobs as a result. Thomas Becker, chief executive of the industry body, cited a study from the European commission that found a 30 percent target on renewables could have created more than 560,000 jobs and boosted economic growth by saving on expensive fuel imports.

The 27 percent renewables target may be easily achieved by 2030 not least because Germany, the world leader on renewable power and the EU's biggest economy, is implementing a radical energy shift away from nuclear into renewables.

Barbara Hendricks, the German environment minister, strongly supported both the renewable energy and emissions targets. Unlike the UK, she said Berlin was keen to have binding renewable targets and added that the 40 percent carbon cut was the minimum acceptable to Germany. At the U.N. climate talks in Paris next year, she said, it was entirely conceivable that Europe would move beyond the 40 percent carbon reduction target.

Harry Verhaar, head of global public and government affairs at Philips, said: “Today's proposal falls short of expectations of European companies looking for a strong framework to invest and innovate in Europe. The omission of a binding energy efficiency target is particularly disappointing. European policy-makers must realize that Europe will never lead on cheap energy and must lead on least consumed energy — energy efficiency is a key driver in making Europe more competitive and energy-independent.”

Mahi Sideridou, managing director of Greenpeace, said the deal was not strong enough: “The January sales are on and it looks like Europe's dirty energy companies have bagged a bargain. The commission's plan for 2030 is a sell-out that would knock the wind out of a booming renewables industry. European citizens will pay the price [in] fewer green jobs, more imports of expensive fossil fuels and shorter lives because of pollution.”

Monica Frassoni, president of the European Alliance to Save Energy, said: “This is a depressing day for Europe. We currently have an energy paradigm where we send billions of euros out of Europe rather than employing people in Europe to save energy. Today's communication was a chance to fix this — instead the commission has given in to the intense lobbying efforts of the large energy providers and energy intensive industries, and what we have is a disaster both for Europe's climate and our competitiveness.”