As California’s historic drought dries up the state’s water supplies and withers its crops, it’s also shaking up the way electricity is produced there.

There’s so little water available in the state’s reservoirs that California’s ability to produce hydropower has been cut in half, while its use of renewables and natural gas power has spiked, a U.S. Energy Information Administration report published Monday shows. 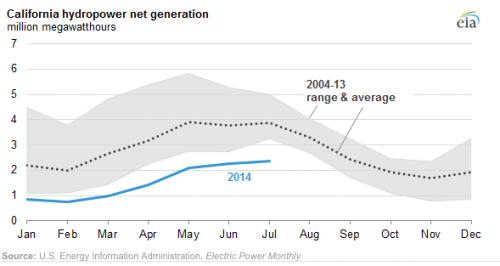 Normally, 20 percent of California’s power comes from hydroelectric sources. But not anymore.

Most of California has been mired in an extreme or exceptional drought since 2011, a phenomenon that recent studies show has a complicated connection to climate change. As of the latest drought monitor, more than 58 percent of California is experiencing the most intense drought conditions, while the entire state is currently seeing some level of severe or extreme drought.

Nearly all of California’s reservoir levels are below average for this time of year, with the water level of Lake Shasta, one of the state’s largest reservoirs, currently sitting at 42 percent of historical average, said California Department of Water Resources spokesman Ted Thomas.

Conditions are so dire that the California State Water Project, which provides supplemental water to 29 public water agencies, can only deliver 5 percent of the amount of water those agencies requested this year, he said. 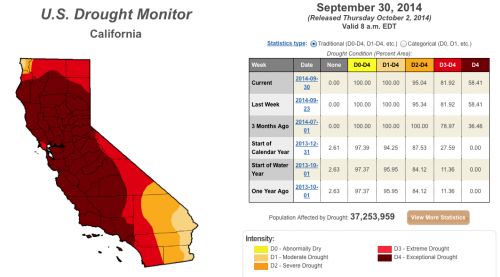 The latest drought monitor from NOAA and the University of Nebraska-Lincoln.
Credit: U.S. Drought Monitor

Early this year, the California Energy Commission estimated that the state’s major utilities together would face a 63 percent shortfall in hydropower generation this year, according to a commission Hydropower Working Group briefing on the matter.

The upshot of this is that the nation’s most populous state is using more low-carbon wind and solar than power than ever before, but the state’s other major source of low-carbon energy — hydropower — is declining as the drought shows no sign of abating any time soon.