Healthy Diet May Reduce Gas; Greenhouse Gas, That Is

The less meat people consume and the healthier their diet becomes, the more the climate benefits, Oxford University scientists said in a study published Monday.

If people in developed countries such as the U.S. were to eat less red meat and move steadily toward a vegetarian or vegan diet, they could live longer while helping to slash greenhouse gas emissions from food production by between 29 and 70 percent by 2050, according to the study published in the Proceedings of the National Academy of Sciences. 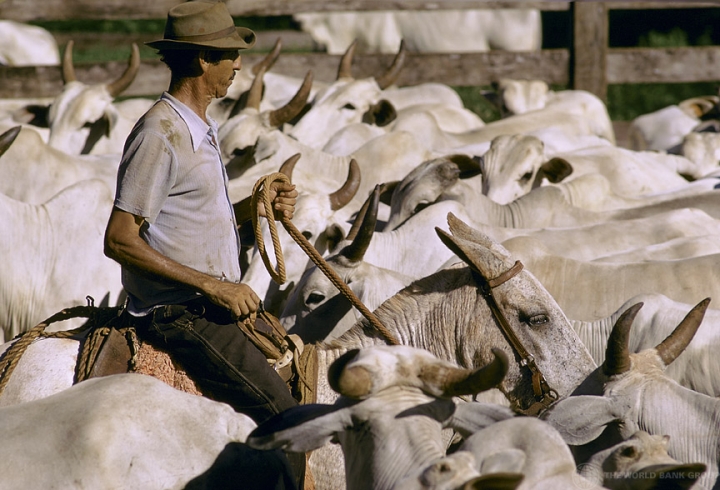 Growing food — especially meat — has a huge impact on the climate, mainly in the form of deforestation and livestock methane emissions. More than 25 percent of annual global greenhouse gas emissions come from food production and consumption, of which 80 percent come from raising livestock.

The research shows that those emissions are set to increase 51 percent through 2050 because of increased global food consumption — from 7.6 billion tons of carbon dioxide-equivalent in 2005 to 11.4 billion tons in 2050. The world’s population, which is 7.3 billion today, is estimated to reach 9.7 billion by 2050, according to United Nations projections.

The study, led by study co-author Marco Springmann, a postdoctoral researcher at Oxford University, compared four global food consumption and emissions scenarios. The first was a United Nations projection for what people are likely to be eating over the next 35 years — an extension of today’s dietary trends. That “business as usual” scenario assumes that global caloric intake will increase by 13 percent between 2005 and 2050, which includes large increases in poultry, red meat and grain consumption.

Other scenarios the researchers considered include one in which most people abstain from eating red meat and poultry and another in which most people assume a vegan diet. A third scenario is based on World Cancer Research Fund and World Health Organization eating guidelines, which assumes people consume no more calories than they need each day, focusing on fruits and vegetables and small portions of poultry and red meat.

“The No. 1 thing is really red meat consumption,” Springmann said. “Beef has more than six times higher greenhouse gas intensity than poultry on a by-serving basis.”

As food-related emissions improve from diets that include less red meat, health improves as well. More than 5 million lives and up to $700 billion in healthcare-related costs would be saved globally if people adopted a healthier diet, he said. 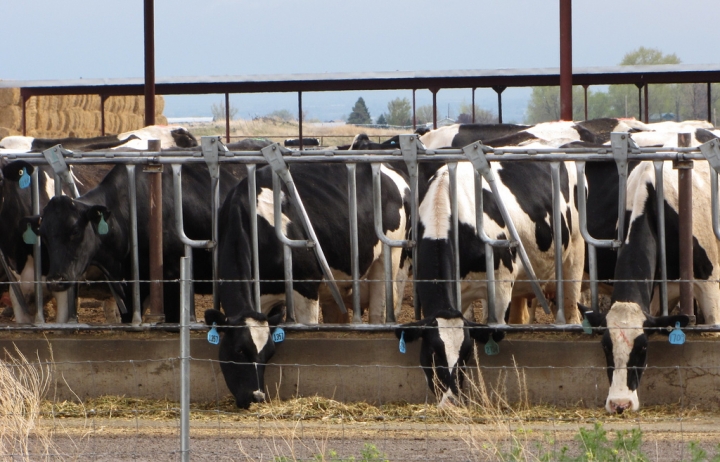 Cattle at a feedlot in Idaho. Credit: Greg Goebel/flickr

“If you want to influence your health in a good way and also reduce your environmental footprint, it would be good to at least think about cutting back on meat and increase your fruit and vegetable consumption in return,” Springmann said.

Scientists unaffiliated with the study say the research by Springmann’s team illustrates the importance of cutting red meat consumption as a way to tackle climate change.

“This study reinforces a growing body of evidence behind a crucial message: For a high probability of keeping global temperature rise below 2°C, we need urgent and dramatic shifts toward plant-based diets,” said Brent Kim, an agriculture and climate researcher at the Johns Hopkins Center for a Livable Future. “The responsibility for changing diets falls most heavily on developed countries, who, per capita, consume the highest amounts of greenhouse gas emissions-intensive foods such as meat and dairy.”

Eric Davidson, a biogeochemist at the University of Maryland, said the study shows that the personal health benefits of a healthy diet may be greater than the environmental benefits.

“This is important, because people are more likely to change habits if they see that there is a personal health benefit than if they are doing so only for the sake of being a good citizen and protecting the environment,” he said. “When both have complementary benefits, then there are potentially stronger motivations for people and institutions to promote more health and less environmentally damaging diets.”

Frederik Hedenus, associate professor of energy and environment at Chalmers University in Gothenburg, Sweden, said the study shows that the total health and environmental benefits of vegan and vegetarian diets are significant.

He said animals require a lot more energy to grow than they provide as food, and cutting back on their consumption dramatically reduces their environmental and climate impacts, especially in the form of methane emissions from cattle production and carbon dioxide emissions from meat processing machinery.

You May Also Like:
2015 One for the Climate Record Books
Utilities Cut Coal Use Amid Clean Power Plan Fight