A punishing and deadly heat wave is roasting the Western U.S., toppling all-time high temperature records in a wide area extending from Arizona to the Pacific Northwest. On Sunday, Las Vegas tied its all-time mark with a high temperature of a sizzling 117°F, and the heat is expected to last at least through midweek. 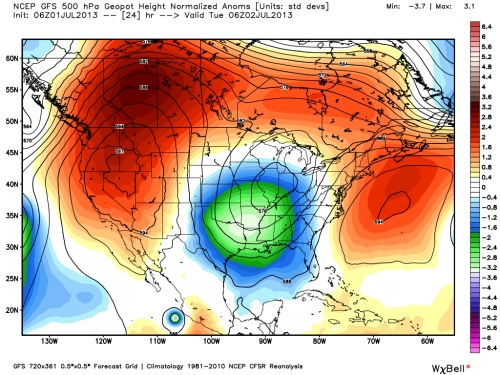 Forecast atmospheric pressure departures from average (geopotential height anomalies) at about 18,000 feet for Tuesday, July 2. The red area shows the sprawling “heat dome” or area of higher than average pressure, across the West.
Credit: Weatherbell.com

The heat wave is affecting areas that are already coping with extreme drought conditions, and the hot and dry weather, combined with dry thunderstorms, has helped set off deadly wildfires — including the deadly Yarnell Hill fire in Arizona. That fire has destroyed at least 200 homes and led to the deaths of 19 specially-trained firefighters on Sunday, in the deadliest wildland firefighting event since 1933, when 29 firefighters were killed battling a blaze in Los Angeles.

The National Weather Service is warning that the heat, combined with more thunderstorms, may spark additional wildfires this week across the West, and may also contribute to extreme wildfire behavior, such as the conditions that overtook the firefighters.

The heat wave is threatening the all-time world-high temperature record of 134°F, set at Death Valley, Calif., in 1913. Forecasts show high temperatures flirting with 130-degrees there on Monday and Tuesday, but probably not reaching or exceeding the all-time mark. On June 30, the 129°F at Death Valley tied the record for the highest temperature on record there in the month of June. Records there extend back to 1911.

In Las Vegas, the National Weather Service called the 117°F on June 30, “The jackpot of Las Vegas record-high temperatures.” It was Las Vegas' highest temperature in the month of June, topping the old mark of 116°F set on June 15, 1940. Las Vegas also had its warmest June on record, with an average temperature of 91.5°F. Official records in Las Vegas date back to 1937.

Record-high temperatures have also been set in California’s Central Valley, Oregon, Washington, and Utah, among other states. For example, Sacramento, Calif., reached 107°F on Saturday, its daily high record. Other parts of the West are also roasting, with Salt Lake City seeing back-to-back days of the hottest temperature on record there, with highs on Friday and Saturday reaching 105°F.

At Needles, Calif., the 122°F on Sunday set a record for the first time that location has ever had three straight days of 120°F or greater heat in the month of June. The previous day, Needles reached a high of 123°F, which broke its all-time mark for the month of June. Records for Needles date back to 1888.

A similar record was set in Kingman, Ariz., where the June 28-30 period was the first time it recorded three straight days with high temperatures of 100°F or greater.

The heat wave is the result of a massive dome of high pressure that has rerouted the jet stream from the Pacific Ocean northward into Canada, preventing storms and cooler air from surging south, and locking the already drought-stricken West into an extended bout of sizzling temperatures.

While each heat wave has ties to short-term weather variability, increasingly common and intense heat waves are one of the most well-understood consequences of manmade global warming, since as global average surface temperatures increase, the probability of extreme heat events increases by a greater amount.

Data already suggests that heat waves have are becoming more common worldwide, and the Western U.S. in general has been warming faster than the rest of the country in recent decades. In fact, Arizona was the fastest-warming state in the continental U.S. since 1970.

Extreme heat also poses a major public health threat, since extreme heat is the No. 1 weather-related killer in the U.S. The NWS has warned that little relief from the hot temperatures can be expected at night, especially in urban areas, and at least one heat-related death has been recorded in Las Vegas.

In addition to the threat to public health, the hot weather is also complicating transportation in parts of the West. According to the New York Times, Phoenix-based US Airways grounded 18 of its regional flights because the manufacturer of the jets had not produced performance statistics for the aircraft at temperatures above 118°F. Extreme heat affects aircraft performance, increasing the amount of runway required for aircraft to take off because warm air has less density than cold air.