If the cold and snow currently blanketing the Mid-Atlantic and Northeast from a fierce winter storm were not bad enough, an even colder blast is expected to arrive early next week. That's when a large section of the “polar vortex” that normally remains over Canada and the Arctic seems ready to pay an unwelcome visit to the continental U.S. 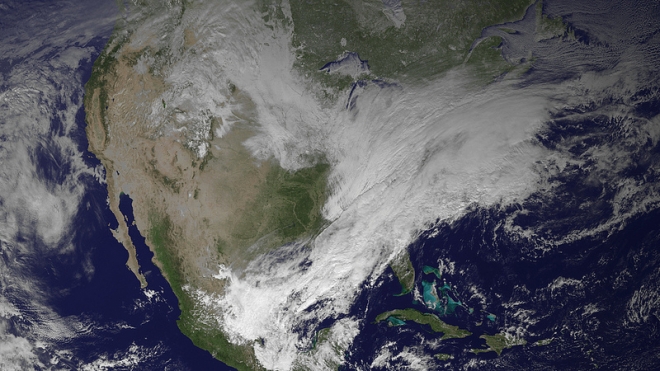 The cold air has already had a major impact. At the height of the snowstorm in Boston early Friday, temperatures were in single digits, making it one of the city’s coldest snowstorms on record.

May hit 0 in #Boston during this snowstorm. Asked folks at @NWSBoston if that's happened before. They said no one can remember it happening.

Typically, snowstorms along the Massachusetts coast occur when temperatures are in the 20s to lower 30s due to milder winds off the Atlantic Ocean, but this time the storm tapped into a frigid air mass across northern New England and transported that air into southern New England. Temperatures in New England on Friday night are expected to sink into the negative teens in valley locations, and near or just below zero in Providence and Boston.

The second major incursion of Arctic air into the continental U.S. is set to spill into the Dakotas on Saturday, where blizzard watches and wind chill advisories are already in effect. Cold weather warnings may expand to more than a dozen states by Monday, as the Arctic air spreads to the south and east, enveloping the Ohio Valley, Mid-Atlantic, Central Mississippi River Valley, and Northeast.

Cities such as Minneapolis, Chicago, Columbus, Cleveland, Washington, and even Atlanta may break longstanding cold temperature records by the time the cold begins to ease on Wednesday. That won't be soon enough for NFL fans as three of the four playoff games this weekend will be played in brutal conditions. Sunday's NFL game between Packers and 49ers could set a record for the coldest game in league history.

In the Dakotas, the National Weather Service (NWS) is expecting a “historic, dangerously cold air mass” with high temperatures of 10 to 20°F below zero, and low temperatures down to 30°F below zero on Sunday and Monday. The wind chill, which is a measure of how the air feels to human skin, and measures the danger of getting frostbite and hypothermia, is expected to plunge to 50 to 60°F below zero across a widespread area. Such low wind chills can cause frostbite on exposed skin in just 5 to 10 to minutes.

Further south, Chicago is anticipating its longest stretch of consecutive hours with below zero degree temperatures since February 1996 when the city endured 66 straight hours of below zero temps. Chicago's record is 98 hours, which occurred in December 1983. Luckily for winter-weary Chicago residents, that record is not likely to be reached or exceeded.

The coldest days in the East look to be Monday through Wednesday, when Washington, New York, and Boston may flirt with overnight low temperatures close to or just below zero, with daytime highs struggling to get into the teens.

The lack of severe cold in large swaths of the U.S. during the past 15 to 30 years may make the upcoming cold feel especially brutal. 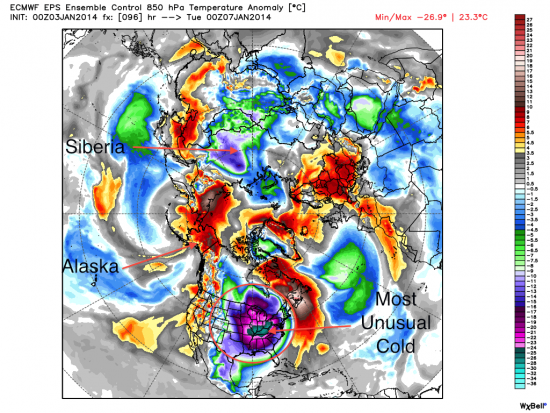 Map of projected near-surface temperature departures from average at 7 p.m. on Monday evening, eastern time. The cold snap, shown as purple and blues and pointed to by the arrow, stands out as the most unusually cold air in the entire hemisphere.
Click image to enlarge. Credit: WeatherBELL Analytics.

“1994 is the last one that comes to mind when we talk about big Arctic outbreaks and a lot of below zero temperatures,” Robert Oravec, an NWS meteorologist, said in an interview on Thursday. Washington saw a low of minus 4°F on Jan. 19, 1994, and it has not been that cold since then.

Computer model projections of temperature departures from average show that the U.S. may experience the largest cold temperature anomalies of any land area in the entire Northern Hemisphere, including Siberia and the Alaskan Arctic. In fact, Greenland and a large portion of the Arctic will be milder than average (but still extremely cold) while U.S. temperatures take a nosedive.

This reversal of typical temperature anomalies provides a clue as to the cause of the Arctic outbreak, which can be traced to northeastern Canada and Greenland, where an area of high pressure and relatively mild temperatures is set to temporarily block the eastward progression of weather systems.

The atmospheric blocking, which is not as strong as some other blocking events in recent years, is forcing a large section of the polar vortex to break off and move south out of Central Canada and into the U.S. The polar vortex is an area of cold low pressure that typically circulates around the Arctic during the winter, spreading tentacles of cold southward into Europe, Asia, and North America at times.

Overall, winters in the U.S. have been warming in recent years, in step with global trends. The fastest-warming states since 1970 — Minnesota, North Dakota, Wisconsin, Vermont and South Dakota — stand to see some of the coldest temperatures. However, recent winters have seen sharp swings in temperatures and major snowstorms affecting the East Coast of the U.S. and parts of Europe, with some research indicating this may be partially linked to the rapid melt of summer sea ice in the Arctic.