This winter has offered a rare treat for visitors to Lake Superior’s Apostle Islands: a stroll across the frozen waters to ice caves straight out of a scene in the movie “Frozen.” Thanks to enduring and massive blasts of frigid air, extensive lake ice has made the caves, normally only accessible to summer visitors traveling by boat, reachable by foot for the first time since 2009.

The bitter weather also has the Great Lakes on the brink of setting a record for the widest ice cover recorded. As of Thursday, 88 percent of the five lakes were covered in ice according to data from the Great Lakes Environmental Research Laboratory. And with persistent cold temperatures forecast through early next week, there’s a chance this year’s ice cover could top the record of 94 percent set in 1979. 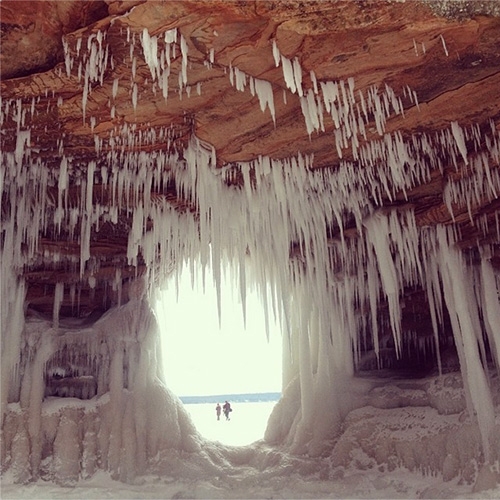 A view from the ice caves on the shores of Lake Superior's Apostle Islands.
Credit: jenhauk/Instagram

Booking next year’s vacation at the ice caves probably isn’t the best bet, though. This year’s ice is far from the norm as the long-term trend has been toward a dramatically reduced ice coverage over the past 40 years, in step with general warming trends in temperatures, particularly winter temperatures.

Every year ice stretches across the Great Lakes. But ice cover has declined by a precipitous 71 percent from 1973-2010. Eight of the 10 lowest ice years have come in the past 15 years. Warmer air and lake temperatures are behind the trend.

“We’ve had a lot of Arctic (air) masses coming our way this year, but the trend (for ice cover) is downwards. It has been downwards over the past 40 years,” George Leshkevich, a physical scientist at the Great Lakes Environmental Research Laboratory, said.

The Upper Midwest is the fastest winter warming region in the U.S. with temperatures rising 1.12°F per decade since 1970. The region is projected to warm as much as 5.4°F by 2050. In the Midwest, projections indicate that there could be 22 fewer freezing days per year by mid-century.

John Lenters, a senior scientist at Limnotech, said that despite the high ice coverage this year, there are still numerous gaps in the ice where water is evaporating and fueling more snow. Buffalo, N.Y., a city well-known for the snow it gets from the lake, is having its ninth-snowiest winter on record.

Lenters also said that ice coverage can change dramatically throughout the day. He said webcams set up on Granite Island on Lake Superior show the dramatic daily changes.

“Even in some parts of the lake where it’s frozen over, it’s a thin skin of ice that’s constantly moving and breaking up,” he said.

In other areas, thicker ice has slowed shipping operations and required Coast Guard ice breakers to log four times more hours of work this winter compared to seasons past according to a report from the Associated Press.

The extent of the ice may be the main story, but the onset of ice and the potential timing of peak coverage is also unusual this year.

“We had reports of some ice cover in harbors as early as the end of November as opposed to mid-December,” Leshkevich said.

According to Leshkevich, the lower half of the Great Lakes generally see their widest extent of the year between mid and late February, but the upper lakes don’t see maximum ice coverage until late February or even early March. 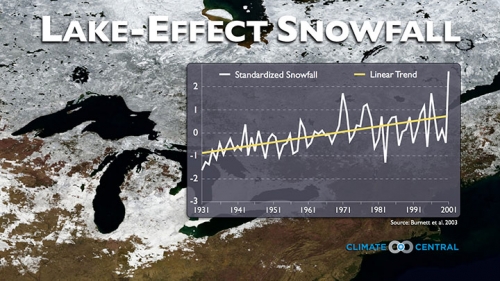 An index of lake-effect snow over the Great Lakes region.
Click image to enlarge.

“We found that years when you have high ice cover, you have fall evaporation preceding high ice,” Lenters said. “Evaporation has a really strong cooling process. It’s like the lakes are sweating so when they sweat a lot, they cool rapidly, which can form ice cover to cap it.”

If the ice cover stays at high levels on the lakes this year, the shipping season on Lake Michigan and Lake Superior, which usually starts in late March, could get off to a slow start. Lingering ice could also put a chill on summer water temperatures, though with average temperatures in the mid-50s, the lakes are hardly a swimmer's paradise.

In low ice years, the opposite is general true. After an historic warm winter in 2011-12 when ice coverage reached only 13 percent, summer water temperatures skyrocketed to 68°F at some locations by mid-July.

All this is to say enjoy the icy scenes coming from the Great Lake this year while you can.

The projections are that we’ll get on average, over 10- to 20-year time periods, lower ice cover,” Lenters said. “This is a blip on the long-term trend.”