The mating rituals of male ocellated wrasses are as intricate as their shimmering scales, and new research showing that carbon dioxide pollution can affect those rituals has some scientists fretting for the future of fish.

Elevated levels of carbon dioxide — which dissolves from the atmosphere into oceans, where it changes acidity levels — can affect fishes’ brains and how they behave. Sometimes they swim toward predators instead of fleeing, for example. 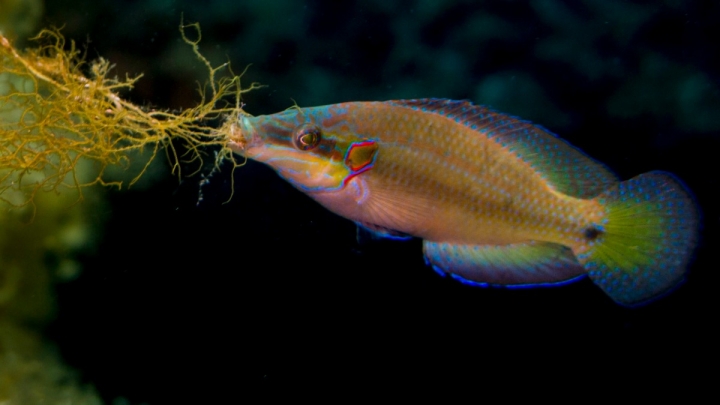 A domiant male ocellated wrasse collects fragments of algae, which it uses for nest building.
Credit: Natascia Tamburello/University of Palermo

Proceedings of the Royal Society B, a journal focusing on biological discoveries, on Tuesday published findings from the floor of Mediterranean Sea near Sicily that revealed these behavioral changes can include the reshaping of the colorful sex lives of one kind of fish.

Changes to fish mating behaviors could exacerbate stresses on entire ocean ecosystems, which are already being pummeled by overfishing, warming waters and plastic and oil pollution. About a quarter of industrial carbon dioxide pollution is entering the seas, and scientists have warned that could cause pH levels to decline by 2100 to levels not experienced for more than 50 millions years.

“For the first time in the wild, we showed fish species with complex reproductive behaviors to be affected by high carbon dioxide levels expected by this century's end,”  said University of Palermo marine biologist Marco Milazzo, who led the new research into wrasses’ mating behavior.

Milazzo was part of an international team of scientists that used video cameras and genetic analysis to study the breeding of the wrasse in the Mediterranean Sea. The group compared breeding at nests built close to carbon dioxide-belching volcanic vents off the Italian island of Sicily with those about 100 miles away.

“This is a small sample size on a single species, but it reveals the potential for fish spawning behavior to be affected by ocean acidification,” said Seth Miller, a Smithsonian Environmental Research Center researcher who wasn’t involved with the new study.

“Fish are really important in marine ecosystems,” Miller said. “We've created so much stress in the ocean already that any additional stressor that disrupts a species has the potential to create real ecological problems.”

The largest male ocellated wrasses build nests on rocky seafloors, then woo females to spawn in them. These dominant males fertilize and protect the eggs, but those eggs are are not always their own.

The scourge of the dominant males are smaller ones, which sneak into nests full of freshly laid eggs, which they try to fertilize. Medium males help keep the smallest ones at bay, but they also slyly fertilize clutches of new eggs in their protectees’ nests when they can. 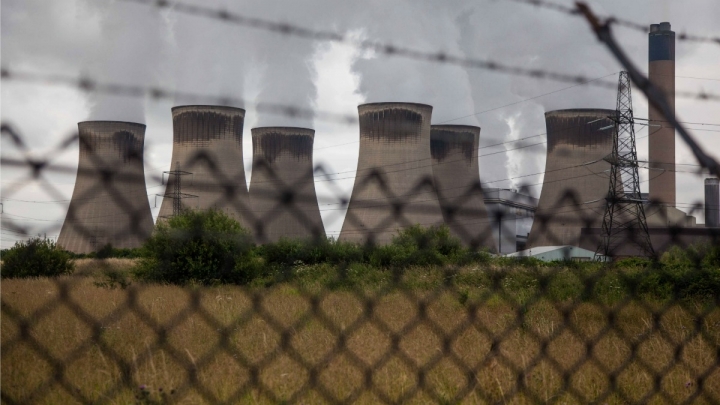 Pollution from power plants, such as the Drax Power Station in England, is leading to changes in ocean chemistry.
Credit: Rajan Zaveri/Climate Central

When the scientists monitored these breeding behaviors near volcanic seeps, which roughly simulated ocean conditions anticipated by the end of the century, they noticed some differences.

In the nests that were built near volcanic vents, where the water contained higher concentrations of carbon dioxide, the underwater videos revealed that dominant males mated less frequently. Despite mating less often, genetic analysis appeared to show these dominant males sired more of the young growing in eggs that they protected (though the small number of nests studied meant that difference was statistically minor).

“In this case, the change in male behavior may not have any effect at the population level,” said Philip Munday, a marine ecologist at James Cook University who wasn’t involved with the new study. “However, similar behavioral effects in other species might.”

When it comes to the scientists’ interests in the wrasses, what matters to them is the indication that industrial pollution is capable of changing the way fish mate.

“Many fish have complex reproductive behaviors that are very difficult to replicate in the laboratory,” Munday said. “This study has overcome this problem.”

Much more research is needed before scientists can understand how pollution from fossil fuel burning and deforestation — and the rise in ocean acidity levels that pollution causes — affects mating in ways that can impact fish populations and their ecosystems.

“Most fish have got these complicated ways of getting it on, and how they find each other, for example, is complex,” said Jason Hall-Spencer, a Plymouth University professor who helped produce this week’s paper.

“If we’re affecting the chemistry of how fish meet each other and have fish, that’s important for their populations,” Hall-Spencer said. “We’ve shown that can happen.”

You May Also Like:
Forecast First: Warmer Temps Favored Across Entire U.S.
Weather Disasters Can Fuel War in Volatile Countries