Google “climate change” and the top two hits are websites that are part of NASA’s online climate portal, followed by a Wikipedia entry and the U.S. Environmental Protection Agency’s climate website.

Websites maintained by the federal government are among the first online stops for the general public — from students, local policymakers and everyone else — to learn about climate change. There is rising concern among scientists and climate communications experts that those websites may be among the first to be deleted, politicized or degraded with inaccurate climate information after President-elect Donald Trump takes office in January, all of which would impact the public’s understanding of the science and urgency of climate change. 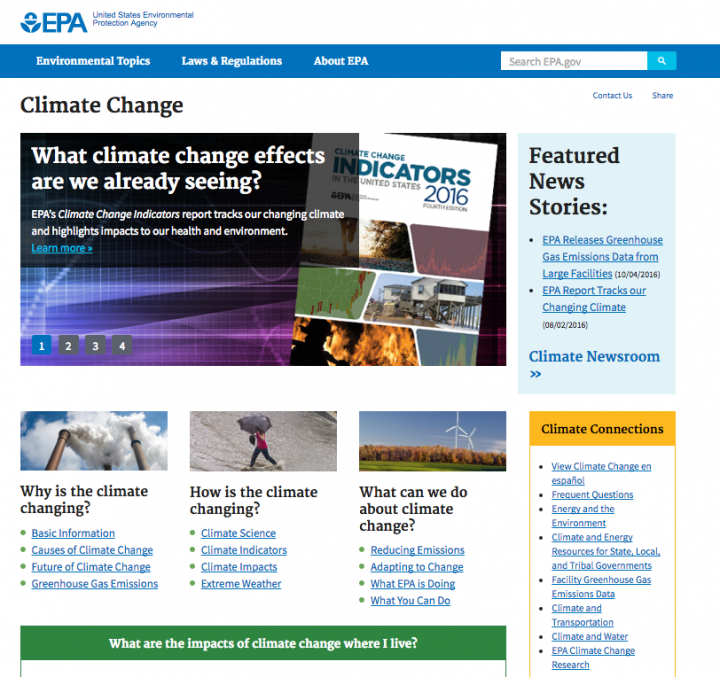 Trump is populating his cabinet with appointees who reject established climate science and have pledged to overturn nearly all of the government’s climate regulations and pull the U.S. out of the Paris climate pact.

EPA administrator nominee Scott Pruitt has falsely said that scientists disagree about the human connection to global warming, and debate about it should be encouraged. Pruitt, currently Oklahoma’s attorney general, says on his official website that he is “a leading advocate against the EPA’s activist agenda.”

Trump’s NASA transition team leader, Chris Shank, has said he wonders if scientists’ “rhetoric” about carbon dioxide emissions — the chief driver of climate change — is “really about some neo-Malthusian discussion on population control.”

Former Texas Gov. Rick Perry, whom Trump has tapped to run the U.S. Department of Energy, which conducts extensive climate research, said in 2014 that calling carbon dioxide a pollutant is a “disservice to the country.”

Scientists worry that the Trump administration will neglect or delete critical climate data on government websites, and researchers are scrambling to download the data to ensure it is preserved. But there is fear that Trump’s cabinet officials will also remove or distort basic climate information that the general public often relies on for its understanding of global warming.

“The first indications we’ve seen are you’re putting a transition team in place that have spent their career attacking the science, dismissing this information and spreading misinformation,” said Andrew Rosenberg, director of the Center for Science and Democracy at the Union of Concerned Scientists. “There’s a real risk they’ll push aside and hide that information.”

The climate change doubters and denialists in Trump’s transition team and cabinet have significant authority within the agencies they lead, strongly suggesting that the climate information the public sees on federal websites is at risk, said Susan Hassol, one of the co-writers of the three U.S. national climate assessments and now the director of Climate Communication, a nonprofit climate science outreach organization.

“If we are to take their public statements and writings at their word, the threat is acute,” she said.

In addition to maintaining critical — and continuous — datasets on weather and climate, federal agencies provide a trove of basic information designed to educate the general public about climate change. 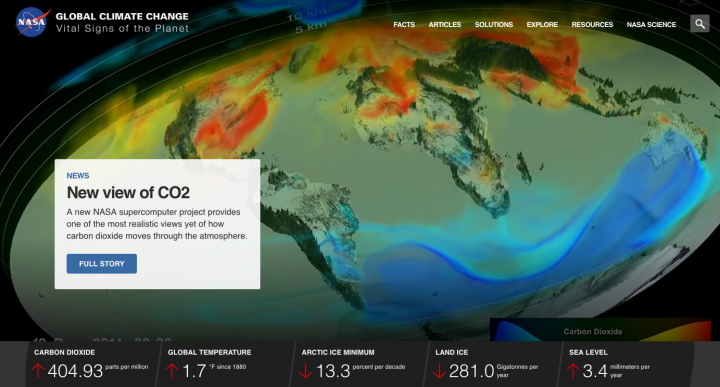 Websites such as Globalchange.gov and NASA’s “Vital Signs for the Planet” offer basic facts and data on global warming for a mass audience. The EPA’s website is full of basic information about U.S. and global greenhouse gas emissions. The National Park Service has a website that can answer questions about why climate change is melting Glacier National Park’s namesake glaciers and the role of global warming in threatening the Everglades.

“Many of these sites have been developed to provide clear and concise expressions of the evidence and their uncertainties,” said Rachael Shwom, a Rutgers University sociologist who studies how people make sense of and respond to climate change. “These sites are used in classrooms and by citizens searching to answer their questions and talk to others in an informed way.”

Americans could be misled about the world’s scientific consensus on climate change if the information on government websites is removed, watered down or distorted, she said. People looking for basic information could seek it from sources that may not be as vigilant about the accuracy of the information they present.

Kathleen Jamieson, director of the Annenberg Public Policy Center at the University of Pennsylvania, said federal government websites providing basic information on climate change serve as primary sources of information for the general public. They are also used by journalists to find climate facts when federal agencies such as NASA or the National Oceanic and Atmospheric Administration make major announcements about alarming climate trends.

“When a topic comes into news or policy debates, policymakers know there’s a trusted source,” Jamieson said. “Take those down, and you lose the ability to inform policymakers about those issues. You diminish the issue of its importance.”

There is precedent for government officials who disagree with the importance or accuracy of established climate science removing politically inconvenient information from government websites, Hassol said.

“In the past, some of this government information has been altered by partisan actors to serve their agenda,” Hassol said. “An example is oil industry lobbyist Philip Cooney who was hired by the George W. Bush administration. Cooney changed the language in government science reports, altering them to exaggerate the uncertainties and downplay the risks and the scientific consensus.”

When this was exposed by a whistleblower, Rick Piltz, Cooney resigned and secured a job with ExxonMobil, according to the New York Times.

“It would be very disturbing to see the purveying of this kind of misinformation to the public again, especially on government websites that are known as trusted sources of objective information,” Hassol said.

Any Trump administration effort to reduce the quality of climate information available to the public on federal websites could have other consequences, Rosenberg said.

“I would worry that if the Trump administration starts to do this, then some other states will start to take similar action,” he said. “If the worst comes to pass and there is a concerted attack and removal of material, the public loses in terms of its trust in government.”