Most of the time it serves as the backdrop to our daily routines or fodder for idle chitchat. But on rare days, it can change lives.

Heat waves and cold snaps, hurricanes and tornadoes, downpours and blizzards — they form the extreme ends of the weather spectrum, affecting our health, infrastructure and livelihoods. And as manmade greenhouse gases are steadily boosting the Earth’s temperature, the nagging question becomes, is global warming to blame? And then, is there more extreme weather in our future?

In 2014, researchers were able to make firm connections between climate change and some extreme weather events, and have begun to include new types of weather in those attributions. Those efforts are likely to gain steam in 2015, bringing the links between weather and climate into clearer focus.

The easiest parallel to draw between extreme weather and climate change has been, not surprisingly, heat. That doesn’t mean just the sweaty, sticky summer days that send you gasping for air conditioning. The overall warming of the atmosphere has made heat records more likely over the span of years, including 2014, both locally and globally.

Multiple independent efforts, including some led by Climate Central, found that both Australia’s record hot year in 2013 and Europe’s expected heat record in 2014 were made many times more likely by climate change. As one researcher said, Australia’s record was virtually impossible without global warming.

Cold records, meanwhile, are a vanishing breed. It has been more than 100 years since the planet last had a record-cold month. But even when cold weather patterns emerge, climate change may play a role. Some researchers think that Arctic ice melt could prompt the frigid invasion of the so-called polar vortex, which plunged the eastern U.S. into teeth-chattering cold last winter. Those conclusions are nowhere near settled and will continue to be debated into 2015, particularly if cold invades again. (It’s worth noting that the East was one of very few blue spots on the otherwise bright red global map in 2014.)

Extremes in precipitation, from drought to downpours to blizzards, have proven tricky to tie to climate change. Drought in particular has complex causes, although California’s record heat in 2014 clearly exacerbated its already severe four-year drought, causing water shortages and disrupting agriculture. The drought and heat also worked together to raise the risk of wildfires, which began burning much earlier than normal in the state.

At the other end of the spectrum, torrential downpours like the one that swamped Pensacola, Fla., this spring are expected to happen more often as more water vapor accumulates in the warming atmosphere. Average snowfalls are expected to drop, although blizzards may continue to disrupt life in snow country for longer than more modest snows.

The signal of climate change in extreme weather may continue to elude researchers for some time, as those signals could be too quiet — at least for now — for climate models and other tools to separate it from the loud cacophony of natural variability. Extreme weather attribution, as the field is called, is still in its infancy, so its methods continue to undergo scrutiny. But its practitioners say they are constantly learning and improving their techniques. 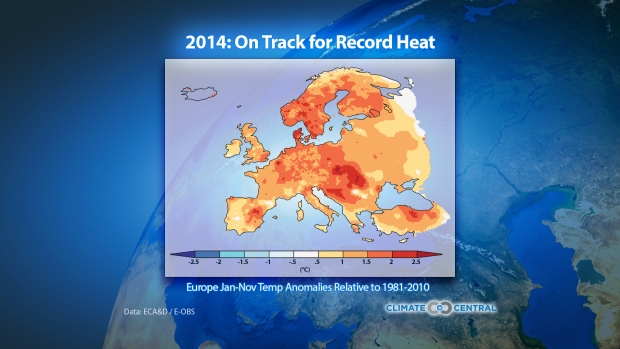 Temperature anomalies across Europe for the year from January-November, as compared to the 1981-2010 average.
Click image to enlarge.

A consensus has emerged to predict that warming will raise the intensity of hurricanes while lowering their overall numbers. Now, scientists have begun to focus on changes in where hurricanes occur and the damage they cause. One 2014 study suggested that the major impacts of hurricanes could shift away from the tropics, while noting the research has a long way to go. Disastrous and deadly storm surges from hurricanes like Sandy are expected to pose an increasing threat and rising costs to coastal communities, damaging infrastructure and causing more power outages.

Also in 2014, scientists began the first earnest looks into how climate change might be affecting smaller-scale phenomena like lightning and tornadoes, with clues that warming may bring more lightning in the U.S. and tornadoes may be clustering together, creating fewer days with more tornadoes, although the reasons why are not yet clear.

Many of these efforts remain in their early stages and produce inconsistent findings, but scientists will forge ahead. After all, the weather is a constant and people will keep wondering how much global warming is already coming home to roost.

Best of Extreme Weather Coverage From 2014:
Thunderstruck: Lightning Will Increase With Warming
Frequency of Flooding Across Europe May Double by 2050
Weather-Related Blackouts Doubled Since 2013: Report
Storm Surge Could Flood NYC 1 in Every 4 Years
Extreme Tornado Swings: What Hold the Key?
Extreme Rainfall Events Like Pensacola's On the Rise
Warming Shifting Hurricane Impacts Away from Tropics
Waves in the Atmosphere Fueling Extreme Weather
Weather Disasters Have Cost the Globe $2.4 Trillion
Tornado Outbreaks Could Have a Climate Change Assist
What Global Warming Might Mean for Extreme Snowfalls
Peak of Tornado Season Shifting Earlier in Tornado Alley
Tornado Days Decreasing, but Number Per Day Rising
Cold Winters in Europe, Asia Linked to Sea Ice Decline