The amount of coal that China is using is tumbling as its electricity consumption falls and that decline may help the country’s greenhouse gas emissions peak a decade earlier than expected, according to a new analysis.

China is the globe’s largest consumer of coal, burning more than three times that of the U.S., and it’s the world’s leading carbon dioxide emitter, the leading driver of climate change. 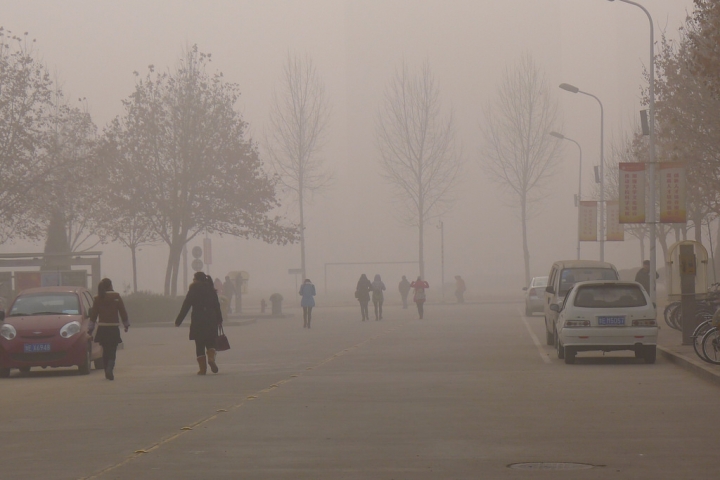 Burning coal for electricity is one of the biggest contributors to air pollution in China.
Credit: V. T. Polywoda/flickr

But after pledging last year to cut its emissions to tackle climate change, China is showing signs of reducing its reliance on fossil fuels: the country’s electricity demand grew by 0.5 percent in 2015 while its coal consumption fell 5 percent and its coal imports fell 35 percent, according the analysis by the Institute of Energy Economics and Financial Analysis, a nonprofit group focusing on global energy.

“Data from the China National Energy Agency confirms that the country is successfully diversifying away from thermal power generation at a far-faster-than-expected rate,” the report says. “Wind, solar, hydro and nuclear continue to gain share at coal’s expense, consistent with a trend established in 2011.”

Thermal power capacity — the amount of electricity China can produce from burning fossil fuels — fell by 9 percent last year, from 54.1 percent of its power supply in 2014 to 49.4 percent in 2015.

“The model for their economy is changing from a far more industrial one to a more service-oriented economy,” Tom Sanzillo, IEEFA director of finance, said. “As a function of that, you demand less electricity, you burn less coal.”

The implications of the changes are huge, the analysis says.

“China’s total emissions are on track to peak potentially a decade earlier than their official target of no later than 2030,” it says.

The U.S. is also seeing a decline in coal consumption, falling 10 percent last year as natural gas competes with coal as the leading fuel for electric power generation.

Beyond climate concerns, China's notoriously bad urban air pollution is one of the biggest reasons the country's coal use is falling, Sanzillo said.

“China is responding somewhat to the greenhouse gas issue, but they’re much more responding to an internal pollution problem,” he said. “If the people are choking, then the government is not doing its job. They need to reduce coal consumption for the people to be able to live in major cities.”

You May Also Like:
The Biggest Energy and Climate Stories of 2015
The 7 Most Interesting Climate Findings of the Year
Climate Chart of the Year? Record Heat, Of Course