Spring heat waves that have been baking the continent in recent weeks are “consistent” with the modeled effects of global warming in Australia, said Tom Knutson, a National Oceanic and Atmospheric Administration climate modeler.

Knutson led research, published a month ago in the annual extreme-weather issue of the Bulletin of the American Meteorological Society, that found human-caused global warming contributed about 1.5°F to Australia’s unusual temperatures in 2013. That was in addition to 1.2°F of additional heat, over and above typical temperatures, that was produced by natural variability.

Together, greenhouse gases and natural fluctuations created a scorching hot year Down Under that left previous records in its dust. The temperatures were so high last year that the Australian government was forced to develop new colors for its weather maps.

While Knutson hasn’t conducted any modeling to try to explain the most recent bouts of extreme Australian heat, he says a similar contribution from anthropogenic warming was likely, combined with a larger contribution from natural variability.

“For the recent event,” Knutson says, “the contribution from natural internal variability I'm sure is much greater than the anthropogenic contribution.”

Here’s a quick trip across some of Australia’s most sunscorched places of late, featuring pore-opening data provided to the Sydney Morning Herald and Australian Broadcasting Corporation by the Australian Bureau of Meteorology: 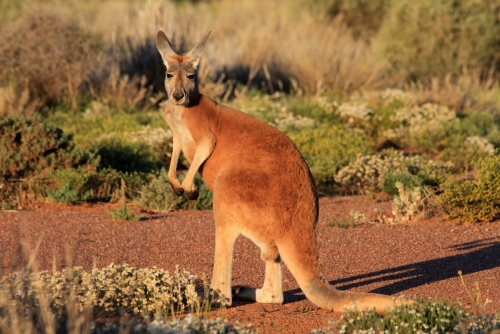 This agricultural outpost routinely experiences the types of furnace-mimicking temperatures for which southwestern Queensland, where the small town is located, is well known. But when the mercury topped out at more than 108°F on Sunday, the town broke its previous record for October heat.

The 100-odd resident of this outback village, 600 miles northwest of Sydney, endured a record-breaking eight consecutive days this month in which the mercury exceeded 95°F.

Temperatures in this Aboriginal community in the Kimberley region exceeded 113°F on Oct. 9, which was two weeks earlier than that benchmark had been reached in recorded history. (113°F might sound like an odd benchmark, but it makes more sense once you realize it’s equivalent to 45 degrees Celsius, which is the temperature measurement of choice in Australia.)