It’s official: When the sea ice that blankets the Arctic Ocean hit its yearly peak on Feb. 25, the maximum area was a record low. 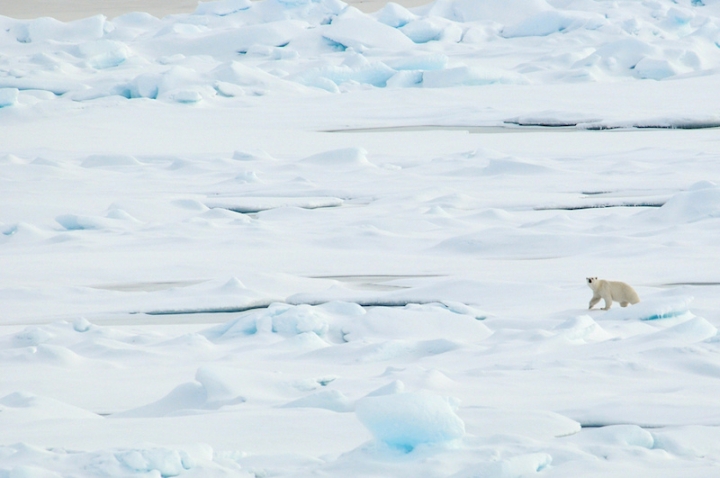 Warm temperatures in parts of the polar regions kept sea ice levels depressed, and also contributed to the winter peak occurring much earlier than usual, the National Snow & Ice Data Center announced Thursday. The maximum normally isn’t reached until early March, but was recorded about a week early this year, the NSIDC said. That low occurred on the backdrop of overall dwindling sea ice levels, fueled by global warming.

The extent of Arctic sea ice is monitored by satellites throughout the year. Scientists keep a close eye on sea ice area because it is so crucial to the polar habitat and has considerable economic potential. Animals like polar bears and walruses depend on it to reach their food, and diminished ice makes the search for sustenance more difficult. Humans are interested in the opportunities afforded by ice melt in terms of new shipping lanes and oil drilling, much more controversial topics.

Changes in sea ice area have also been linked to changes in weather patterns over North America, Europe and Asia, though the connection is still tenuous.

The amount of the polar ocean covered by sea ice waxes and wanes with the seasons, reaching its lowest point at the end of summer and its peak at the end of winter. But this natural cycle has been affected by the rapid warming of the Arctic, which is happening at a much faster than the world as a whole.

As the Earth warms and ice melts, more areas of open ocean are created. The dark waters readily absorb the sun’s rays, whereas bright, white sea ice would reflect them. The heat absorbed by those waters melts more ice, creating a self-perpetuating cycle.

Extremely warm temperatures over the Pacific sector of the Arctic this winter — and linked to the heat that has baked the U.S. West — helped keep ice in those area much below normal. 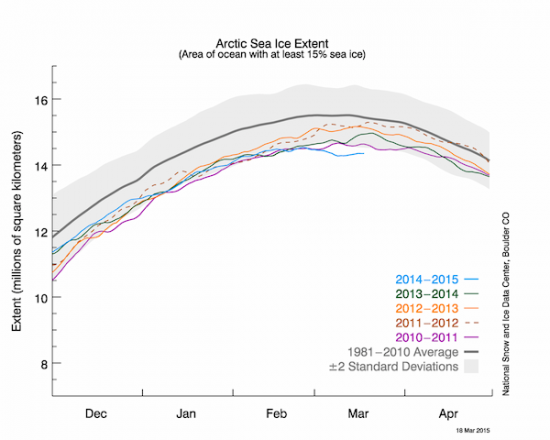 In the first two weeks of March, temperatures were also unusually warm over parts of the Atlantic sector.

Those weather patterns contributed to the early peak, which while unusual, wasn’t unprecedented. In 1996, the peak occurred on Feb. 24.

Neither the winter maximum area nor its timing necessarily has an effect on the summer minimum. Research has shown little correlation between minimum and maximum areas, and 1996 actually was a banner year for summer extent.

“What is more important is how thick the ice is,” Julienne Stroeve, a NSIDC sea ice researcher said in an email.

Older, thicker ice is more likely to withstand the warmer temperatures of summer than younger, thinner ice. But the pressures of rapid warming have been thinning Arctic sea ice overall, recent research has shown.

How the ice has fared in terms of thickness this winter is something the NSIDC is still analyzing and will release early next month.

You May Also Like:
Two Months In and 2015 Is Record Warm
Index Shows Oil’s Climate Impacts Vary Widely
California, Quebec Teaming Up On Climate Change
Include Climate Change in Disaster Planning, FEMA Says