It’s that time of year again: No, we’re not talking allergies flaring or cherry blossoms blooming, but the Arctic ice cap reaching its maximum size for the year.

Arctic sea ice reached its maximum area, or extent, on March 21, after a brief late season surge in ice formation. The total amount of ice coverage peaked at 5.7 million square miles, some 282,000 square miles below the 1981-to-2010 average. It ranks as the fifth lowest winter extent in the satellite record, stretching back to 1978 (2011 holds the record low). 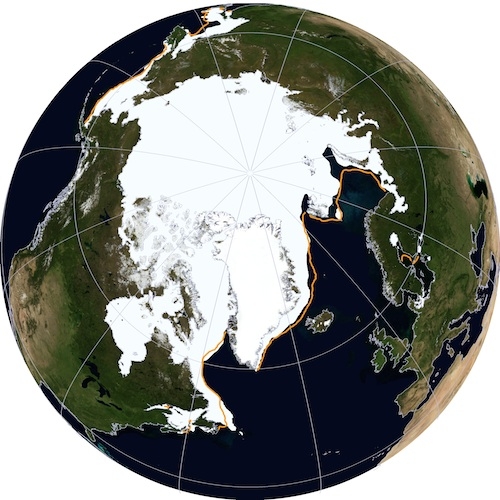 This maximum comes as part of the inexorable decline in Arctic sea ice over the past few decades, a decline that could alter regional atmospheric and ocean circulation patterns. The warmer waters that result when sea ice melts also could cause melting of the Greenland Ice Sheet, contributing to sea level rise, and Arctic permafrost, which could ultimately release massive amounts of carbon dioxide.

The decline in sea ice has been particularly noticeable at the end of the summer melt season, which has been getting longer over the same time period, a new study finds. However, what exactly will happen this summer is beyond the current forecasting capabilities of scientists, according to another new study that examined the skill of seasonal Arctic sea ice projections.

There was about an average amount of sea ice across most of the Arctic Ocean this winter, except in the Barents Sea and the Sea of Okhotsk, where levels were lower than normal.

“It’s pretty much what we have been seeing” in winter, said Julienne Stroeve, a senior scientist at the National Snow & Ice Data Center, which monitors sea ice levels throughout the year.

One interesting exception is that late season surge, which was brought about by a shift in a regional climate pattern called the Arctic Oscillation that happened in the second week of March. That influenced wind and ocean circulation patterns in a way that spread the ice pack in the Barents and Bering seas, where ice coverage had been low all season, according to the NSIDC.

Multi-year ice, which is ice that has lasted at least two seasons, made up 43 percent of the ice pack this winter compared to 30 percent last winter. Multi-year ice is typically more resistant to summer melting than thinner first-year ice and is important to the future integrity of the Arctic ice cap, though having more multi-year ice doesn’t necessarily mean there will be a more robust icepack at the end of this coming summer.

Predictions of summer ice extent, in fact, have proven to be a thorny problem, despite the intense desire for them on the part of oil drilling and shipping interests. A new study co-authored by Stroeve found that forecasts of the summer ice extent, regardless of what methods were used, can’t predict the large dips or rises in summer extent that can be seen in some years. It’s only when the September ice minimum follows the long-term average that the forecasts show some success.

Neither the extent of winter sea ice nor its thickness seems to have a strong correlation to the summer ice extent, the study, detailed in the journal Geophysical Research Letters, found. 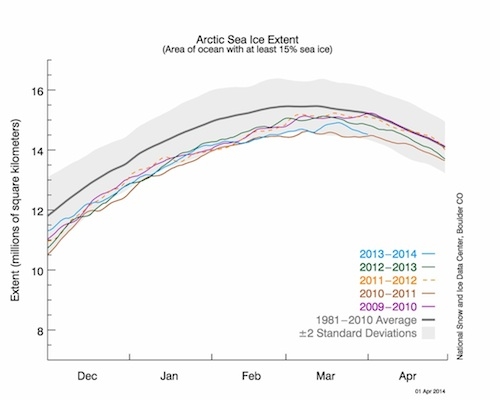 “There’s a lot we need to learn, obviously, and improve upon,” said Stroeve, who spoke while attending a conference addressing this issue. She said the study shows how much summer’s weather in the Arctic can influence the ultimate minimum come September.

That difficulty in predicting year-to-year variations doesn’t negate the overall downward trend in sea ice extent that has been observed over the past few decades and is expected to continue into the future as the Earth warms. It means simply that “it’s just really hard to predict those wiggles along those downward trends,” Stroeve said.

Stroeve did note that since reaching the maximum on March 21, the sea ice extent has been declining at a fairly brisk pace. “It’s looking pretty steep,” she said.

Such a rapid decline can feed back on itself as open ocean is exposed to the sun, absorbing its rays at a time when it is at its highest in the sky and so sending the most radiation down to the surface. The warming of the ocean waters further melts the sea ice, Stroeve said.

That kind of feedback is behind an observed lengthening of the summer melt season described in another recent study in which Stroeve participated. The study, also published in Geophysical Research Letters, found that about five days were added to the melt season each decade between 1979 and 2013, both in terms of the melt starting earlier and the winter freeze beginning later. The amount of extra energy this effect allowed the ocean to absorb between 2007 and 2010 was enough to decrease Arctic ice thickness by 3 to 4 feet, the study found.