A harsh blast of Arctic air, accompanied by snow, sleet, and freezing rain in many areas, has solidified its grip on more than half of the lower 48 states, with winter weather watches and warnings in effect for about two dozen states, from the California coastline to Minnesota. The cold air outbreak is one of the most severe to occur in early December in several years, possibly since the late 1990s. 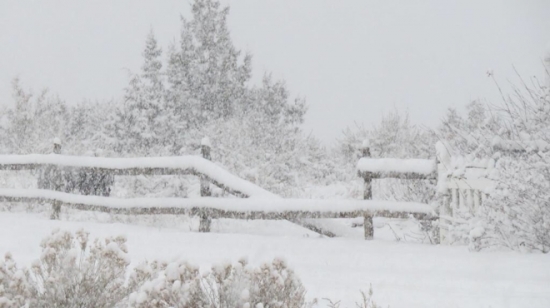 So far, more than 2 feet of snow has fallen in Minnesota, with 1-2 feet falling in the mountains of Colorado, Idaho, Montana, Utah, and Wyoming. Minnesota Public Radio meteorologist Paul Huttner said the snow totals in northern Minnesota could be “epic,” with more than 3 feet expected.

In California’s Central Valley, a vital agricultural region for the U.S., farmers were taking steps to protect crops from multiple nights with low temperatures in the low to mid-20s.

Wind-chill advisories and warnings were in effect in many areas that are used to cold weather, including northern Montana. “The . . . Arctic intrusion has brought temperatures to dangerously low values, particularly across the Northern Rockies and Northern Plains,” the National Weather Service said in an online discussion.

Wind-chill values, which include the combination of air temperature and wind speed and the associated effects on the human body, are expected to dip as low as minus-40°F in those areas, the NWS said. While those temperatures are considered to be dangerously cold, they are not unprecedented for this time of year in the northern Plains.

As of Wednesday morning, an Arctic cold front separating the bone-chilling cold from milder-than-average temperatures was draped from the Desert Southeast to the Lower Great Lakes, and several waves of low pressure were moving along it, producing snow from the Colorado Rockies to northern Minnesota.

The Arctic front brought a sudden change from spring-like temperatures to winter conditions when it passed through Denver on Tuesday. Before the front moved through, the temperature stood at a balmy 56°F on Tuesday at about midday. Just 5 hours later, temperatures cooled to 19°F. Many parts of Colorado may not exceed 15°F for nearly a full week. 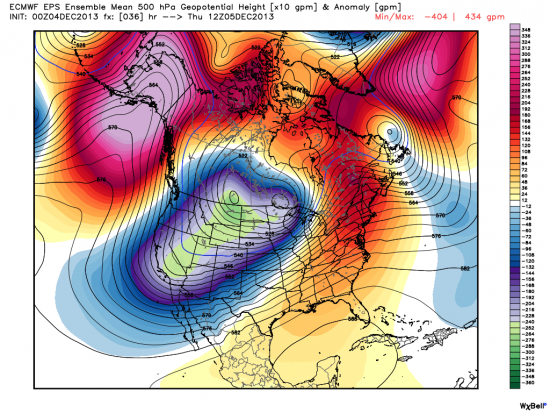 A new storm system has started to form and it will move along this Arctic front, spreading freezing rain, sleet, and heavy snow from the lower Mississippi River Valley to the Upper Midwest. Dangerous accumulations of freezing rain are possible starting on Thursday in portions of Missouri, Oklahoma, Arkansas, and Illinois, according to the NWS.

Eventually, the wintry mess is forecast to extend along the Appalachians as the colder-than-average air slides eastward and mixed precipitation heads into interior portions of New England. The precipitation will be aided by an unusually strong jet stream aloft, with upper-level winds at about 30,000 feet exceeding 200 mph.

The weather pattern producing the cold air outbreak features a contorted jet stream that resembles a giant snake on a weather map, with a huge ridge of high pressure shunting the jet stream to the north of Alaska (bringing milder-than-average conditions there), only to come surging southward above the West and carving out a deep trough across the Central states.

Persistent areas of high pressure like the one over Alaska, as well as long-lasting unusual jet stream patterns, have caught the attention of some scientists who think such features may be becoming more common as the Arctic warms and sea ice declines. It’s an area of active research, with little consensus yet emerging from the meteorological community.

The cold snap means that 2013 will likely become the first year in 20 years in which record daily lows exceed record daily highs in the U.S. In a trend that is likely related in part to manmade global warming, there has been an increasing imbalance between record highs and lows during the past several decades, with record highs far outnumbering record lows.

This year is a rare exception to that trend, but it does not indicate a slowdown or reversal of U.S. or global long-term warming trends, since short-term climate variability ensures that there will still be cold snaps and heat waves even in a warming world.

Globally, 2013 is expected to be the 7th-warmest year on record, which follows the warmest decade since records began in 1850.