The massive Pacific storms that streamed onto the California shoreline dropped a lot of rain, but they did little to ease long-term drought conditions and may end up exacerbating what is already expected to be a disastrous wildfire season.

This week’s U.S. Drought Monitor, released Thursday morning, shows that the “blockbuster” storms that lasted from Feb. 26 to March 2, dropped as much as 75 percent of the moisture some California cities have received all season. Burbank received 4.78 inches of its 5.28-inch season-to-date rainfall total and downtown Los Angeles received 4.52 inches of its 5.72-inch total. 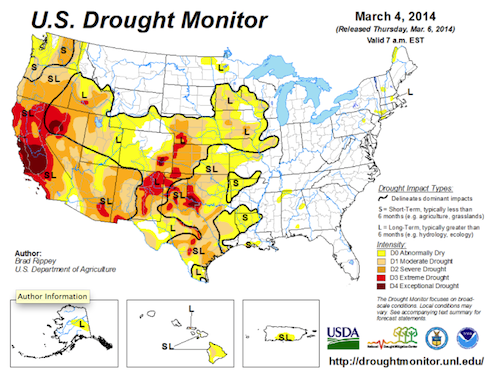 The cruel irony is that the much-needed moisture may end up making a wildfire season expected to be catastrophic even worse than it would have been if the region had stayed completely dry.

“The initial impact will be to dampen the immediate impact of fires,” said Drought Monitor author Brad Rippey, a meteorologist for the U.S. Department of Agriculture in Washington, D.C.. “But this rain will be enough to promote spring growth of vegetation that may otherwise have been dormant because of the drought. There may actually be more to burn, at least the lighter fuels, than if it had stayed dry all the way through.”

Grasses will sprout and grow because of the rains, then they’ll quickly dry out and provide easy fuel for a major wildfire, he said.

“I do unfortunately expect another active wildfire season in Northern California,” Rippey said.

The Drought Monitor update shows that more than half the contiguous U.S. — 53.47 percent — is abnormally dry or experiencing drought, with exceptional, or the most severe drought conditions affecting 1.57 percent of the country. For both figures, that’s less than 1 percent improvement over last week’s Drought Monitor. 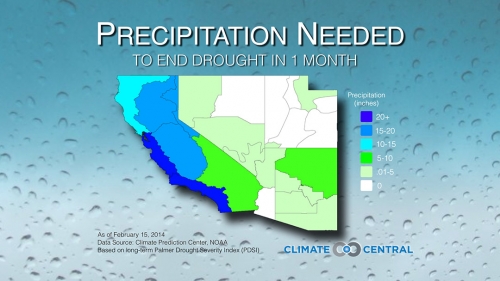 Last week’s California storms tracked too far south to provide adequate moisture in many of the most important Sierra Nevada watersheds, focusing instead on the state’s coastal areas.

“It was great for groundwater recharge, but it doesn’t do a whole lot for the water supply outlook,” Rippey said. “For agricultural areas of California, it’s really the Sierra Nevada that drives the agricultural irrigation.”

For farmers, the storm helped ease the drought slightly, reducing irrigation requirements for drought-stricken crops and it may help winter grains and pastures bounce back, he said.

“Unless we get more storms, we’ll still end up with a third consecutive year of drought,” Rippey said. “I think it’s almost a guarantee.”

Some areas of California, including the Los Angeles Basin, need more than 20 inches of rain in the span of a month to end the drought. According to an updated estimate from a National Weather Service office in California, the odds of that happening are now 1-in-200.

No major storms are in the forecast for California in the next two weeks, Rippey said.