May Marks One More Record Hot Month for the World

The streak continues: May was record warm for the globe, according to NASA data released Monday.

It’s now even more likely that 2016 will be the hottest year ever recorded, despite the demise of one of the strongest El Niños on record. 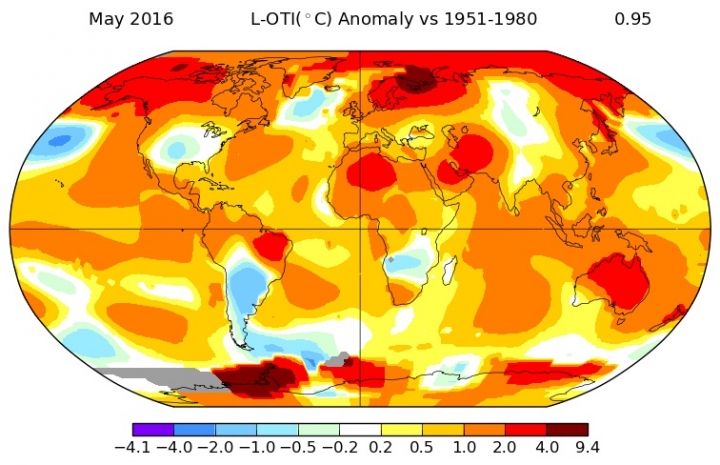 How temperatures across the globe differed from average.
Click image to enlarge. Credit: NASA

So far this year every month has been record warm. February and March actually set consecutive records for the most anomalously warm month, according to data from the National Oceanic and Atmospheric Administration (NOAA). February retained that record by NASA’s reckoning.

NOAA will release its global temperature data on Friday. If it also rates May as record warm, it will be the 13th month in a row to reach that mark in its records. NASA and NOAA use slightly different methods to process the temperature data and use different baseline periods for comparison (NOAA uses the 20th century average).

Even without May’s record heat, there was a 99 percent chance that 2016 was going to best 2015 as the warmest year on record.

Whether that happens depends on how the remainder of the year plays out. A La Niña — which tends to depress global temperatures — is expected to form by fall, but La Niña’s biggest effects will likely come in 2017.

And though El Niño provided a small boost to those temperatures, the main driver is the excess heat that has been trapped by decades of unabated emissions of carbon dioxide and other greenhouse gases. In fact, La Niña years now are hotter than El Niño years of several decades ago. 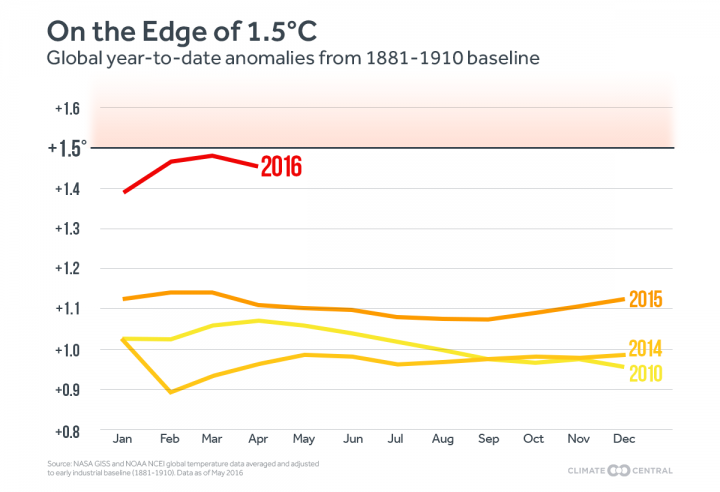 Nations have agreed to limit carbon dioxide emissions to keep warming under 2°C (4°F) by the end of the century, but have discussed trying to achieve an even more ambitious target of 1.5°C (3°F).

You May Also Like:
A Simple Idea Could Help Wildlife Survive Climate Change
Scientists Turn Carbon Dioxide Emissions to Stone
Recent Deluge in France Boosted By Warming
El Niño Had a Good Run, But Now It’s Over