LONDON — Who’d be a bat? Global warming is about to make your life ever more difficult, because higher air temperatures will make echo-location of insect prey so much less effective.

And if the world reacts, stops burning fossil fuel, and invests in green energy, then your chances of being killed by a wind turbine become just so much higher.

Holger Goerlitz, of the Max Planck Institute for Ornithology in Seewiesen, Germany, and colleagues report in the Proceedings of the Royal Society Interface that they looked at the challenge faced by bats that hunt with ultrasound. 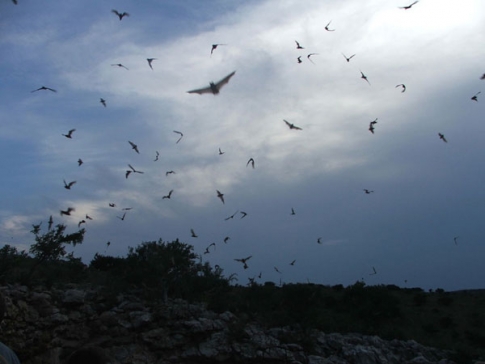 Bats that emit the highest frequency sounds to hunt will find their kill zone more limited while those bats that work with the lowest frequencies will find global warming works more to their advantage.
Credit: dizfunkshinal/Wikimedia Commons

Around 1,000 species of bat use echo-location to identify prey and head for it. They emit an ultrasonic squeak, and wait for the echo as the sound returns from a fat insect that might make a tasty snack.

But the carrying capacity of the air is affected by temperature and humidity. As temperatures rise, bats that make the highest frequency squeaks could be at a disadvantage, the authors report. This is because warmer air is more likely to attenuate sound, and therefore limit the range at which a hungry bat can pinpoint its next mouthful.

So the danger is that greenhouse gas emissions will warm the atmosphere and for longer periods of time limit what scientists like to call “prey detection volume”.

The bats most likely to experience smaller hunting space will be in Europe or the temperate parts of North America: bats in the tropic zones have learned to accommodate hot evenings anyway.

Bats that emit the highest frequency sounds to hunt will find their kill zone more limited. Paradoxically, those bats that work with the lowest frequencies will find that global warming works more to their advantage, the researchers say.

The scientists took temperature and humidity data for May to September during the hunting hours after sunset in Germany as the basis for their calculations, and similar data from Malaysia for comparison. 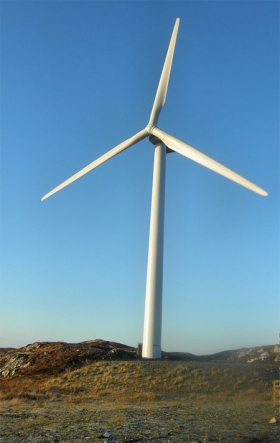 The German research was based on mathematical calculation. A grimmer picture of bats in a renewable energy world is based on body counts.

Mark Hayes at the University of Colorado, Denver used evidence of dead bats found in the vicinity of wind turbines to arrive at a new figure for bat slaughter in the U.S. He reports in the journal BioScience.

Wind turbines can spin at up to more than 280 kilometers an hour (174 miles per hour), and blades can stretch to 40 meters (131 feet). Hayes made his analysis of the dead bats near wind farms, and arrived at what he warns is a conservative estimate for bat deaths per megawatt of installed wind energy.

There are 45 species of bat in the contiguous United States: they catch insect pests like mosquitoes, and they also pollinate some important crops, so their loss could have consequences for human society.

But it is important to keep the numbers in perspective. Neither global warming nor renewable energy are the real threats to bats, or for that matter birds. Most human activity is a menace to nature’s flying objects.

The biggest problem for bats, as for birds, is simply loss of habitat as human populations grow, cities swell, and more forests are cleared for farmland.