LONDON – Heavy and prolonged rainfall will cause both more frequent and more severe flooding across the United Kingdom and the rest of north-west Europe as the atmosphere continues to warm, say British and American scientists.

A study in IOP Publishing’s Environmental Research Letters of what are known as atmospheric rivers pins the blame for the increasing flood risk firmly on man-made climate change and says the same problem will afflict other parts of the planet. 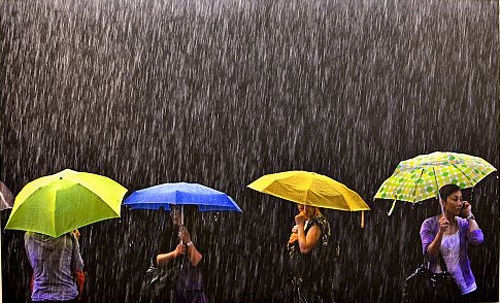 Don’t go out without your umbrella. More downpours are on the way due to larger atmospheric rivers from a warming climate.
Credit: Roger Price via Wikimedia Commons

Researchers at the University of Reading near London, and the U.S. University of Iowa, describe how atmospheric rivers carry vast amounts of water vapor around the Earth, delivering heavy and prolonged rainfall, particularly to mountainous areas. They were responsible for the protracted winter and summer floods in the UK in 2012, which caused an estimated $1.6 billion in damage.

In a warming world the atmosphere can carry more water and the research showed that the rivers, typically running a kilometer (.62 miles) above the earth, 300 kilometers (186 miles) wide and thousands of kilometers long, would become larger and capable of delivering even bigger quantities of prolonged rainfall.

An example of their potential danger is the atmospheric river that caused the severe flooding on November 19, 2009 over north-west Britain. As it approached the coast it was transporting a moisture volume 4,500 times the average gauged flow of the river Thames through London.

In California, where atmospheric rivers (ARs) have already been assessed, the climate models predict that the number of years with these features will increase. To discover what could happen in Europe the models were tested against the known flooding events between 1980 and 2005, and the researchers found that they could accurately simulate what actually happened.

This gave them confidence to test what would happen in the future. All the models showed that with more greenhouse gases emitted by humans there would be a doubling of the number of atmospheric rivers later this century compared with the 1980 to 2005 period. Most of these events occur in the winter, but in a warmer world the danger period is extended.

Effects will be widespread

Because of the way the warmer atmosphere is able to carry more water and deliver much higher rainfall totals, the potential for far worse floods from each of these rainfall events is much increased. 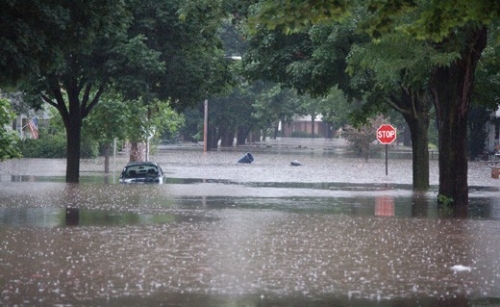 Because of the way the warmer atmosphere is able to carry more water and deliver much higher rainfall totals, the potential for far worse floods from each of these rainfall events is much increased.
Credit: flickr/U.S. Geological Survey

The head of the research, Dr. David Lavers, from the department of meteorology at the University of Reading, said: “ARs could become stronger in terms of their moisture transport. In a warming world, atmospheric water vapor content is expected to rise due to an increase in saturation water vapor pressure with air temperature. This is likely to result in increased water vapor transport.”

The paper points out that while the scientists were specifically looking at the atmospheric rivers that caused heavy rainfall in Europe; these storms affect many temperate regions of the planet. As the atmosphere warms, it is likely that they will increase the risk of flooding elsewhere.