BROOKLYN, N.Y. — Loss is like a black hole, sucking everything nearby into its orbit. It shapes everything left behind, reframes relationships, leaves you grasping for memories as they peel away into the murky abyss of time.

You can realize all these things and yet still be completely unprepared for loss when it arrives. What if there were a warning, a reminder of all the beauty that you can still save?

That’s the proposition put forward in Zaria Forman’s drawings. They show the rapid loss of polar ice to the sea. It’s a loss set in motion by human carbon pollution, but one that humanity is also uniquely poised to halt (or at least slow). 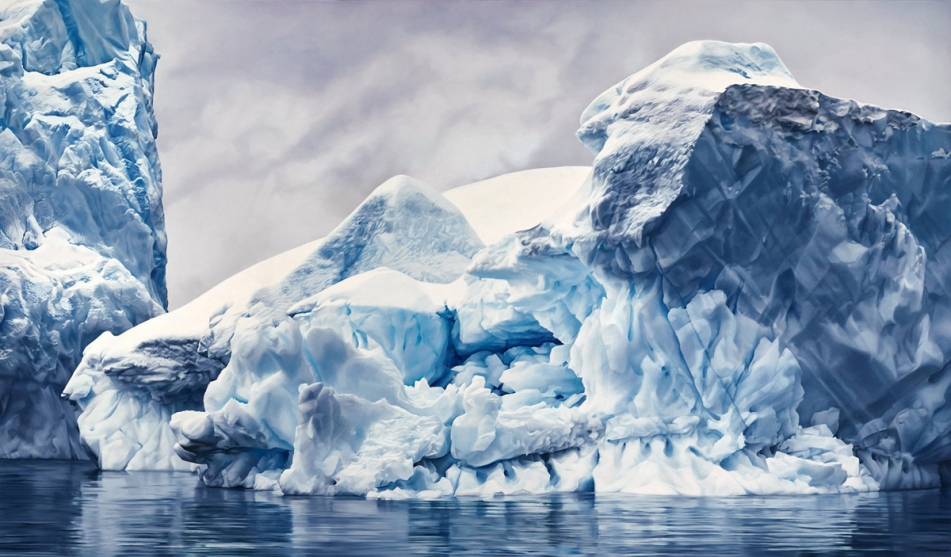 A look at the finished drawing of Whale Bay no. 4.
Credit: Zaria Forman

Her drawings render the exquisite details of polar ice adrift, celebrating its beauty, eulogizing its death and shouting a call to action before all we’re left with are drawings, stories and memories.

Walking into Forman’s Brooklyn studio is enlightening. Light floods in the eastern-facing windows. Potted succulents, a lived-in couch, a handful of art books and scatters of photo contact sheets make it look almost like a movie set.

At the center of it is Forman, a slight 30-something with smoky eyes framed by salt and pepper bangs. She’s warm and welcoming, offering to turn the lights down so you can get the full effect of her latest work.

And that work is where the revelation happens. A massive 10-foot drawing of ice at sea stretches across the western wall. It took Forman six months to create by smearing pastels on her hands and drawing the ice in painstaking detail from a photo she took on a trip to the Antarctic. In the morning light, it takes on an ethereal glow. 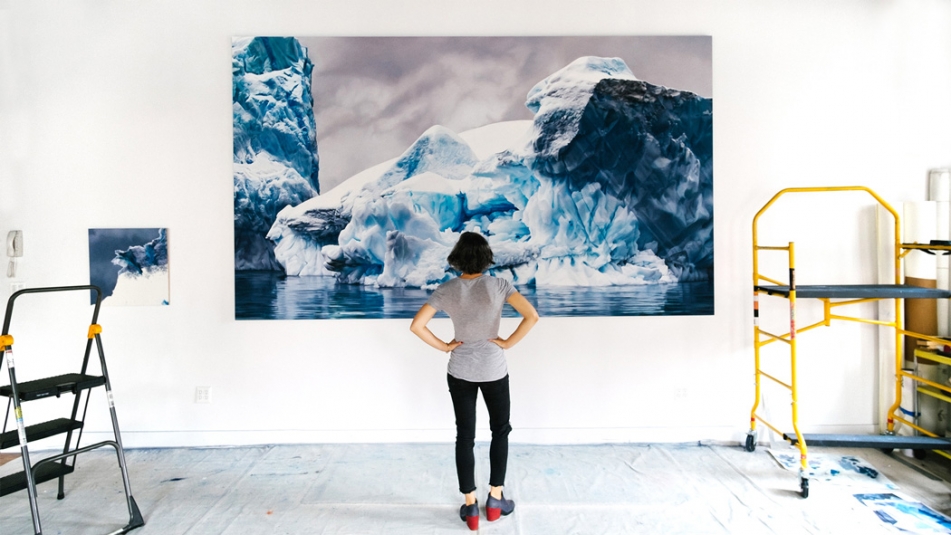 Zaria Forman in her studio looking at Whale Bay no. 4, a drawing now on display at the Harvard University Center for the Environment.
Credit: Brian Kahn

The drawing feels like a lucid dream manifested, still dripping in the dew of that moment between being asleep and awake. It is a situation where the time-worn phrase “photos don’t do it justice” feels appropriate.

There are electric blues where the ice catches the sunlight, a color so vivid that it almost feels like it shouldn’t exist. The deeper blue of the water beneath the ice captures the turbulent, chilly nature of the Southern Ocean. The crisp white peaks of ice look like a starched table cloth.

It’s a lot to take in at once. From a distance, it’s all shape and form, a massive edifice of ice. But step closer and you’ll find cavities, folds, spines and other intimate details of what happens when ice is torn asunder and exposed to the warming rays of the sun. It inspires both awe and self-reflection.

Ultimately, it’s a celebration of the beauty of the landscapes we’re losing due to climate change. Whether it’s this or any of her other pieces, Forman’s drawings render climate change real and present in ways no graphs or maps can.

Climate change became a persistent theme of Forman’s work following a 2006 trip to Greenland, a year after she graduated from Skidmore College. Her early work had focused largely on the sky and forces of nature. Moody, tumultuous clouds took up the majority of the real estate in her drawings, with the land and water beneath a minimal frame of reference. She planned to continue on that path, and the Greenland trip was an opportunity to gather more inspiration.

“There were these gorgeous glimmering icebergs in my photos, but in my drawings at first I omitted them because I didn't think I was capable of rendering them properly in pastel.” she said. “White is one of the hardest colors to work with. It’s oilier and therefore doesn't blend with other pigments easily. I had been drawing wispy, nebulous elements and didn’t think detailed objects with clearly defined edges would be possible to depict with pastels.” 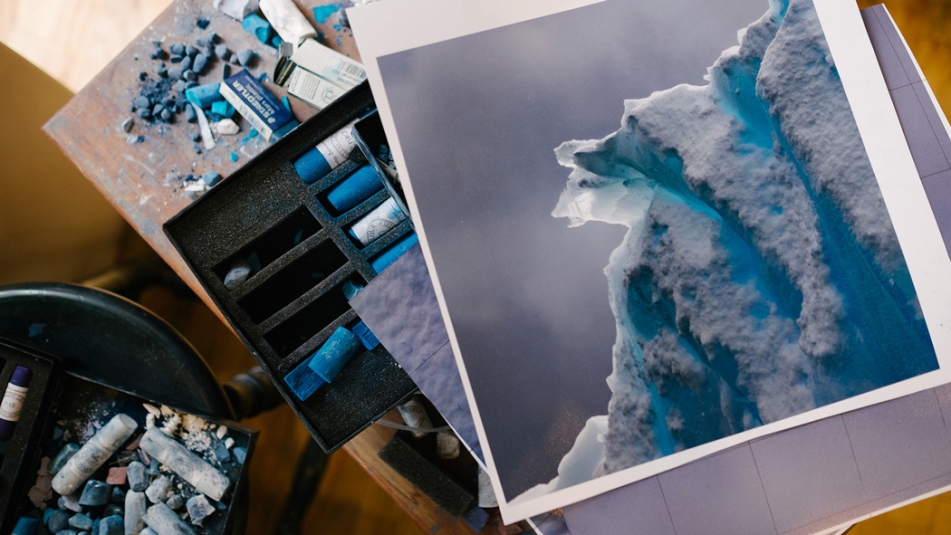 But speaking to Greenlanders about the climate change they were experiencing first-hand changed everything. Disappearing ice has altered not just the landscape, but their way of life, from how they hunt to how they get around.

“When the climate crisis was illuminated for me there, I knew immediately that I had to address it in my work,” she said. “It’s arguably the most important crisis we face as a global community. If I can make drawings that will help viewers understand this, and help connect them with a place that is otherwise remote and distant to most people, I knew that was what I had to do.”

Forman has been through her own personal loss, which in some ways has shaped her artwork. Rena Bass Forman, her mother and a landscape photographer whose work was informed by historical explorers, passed away while the two were planning a return trip to Greenland in 2012. The two were tightly bound by love and art, and the landscapes.

Still grieving from the loss, Forman followed through on the trip, scattering her mother’s ashes across Greenland, which bound Forman even closer to the landscape that climate change is now reshaping. 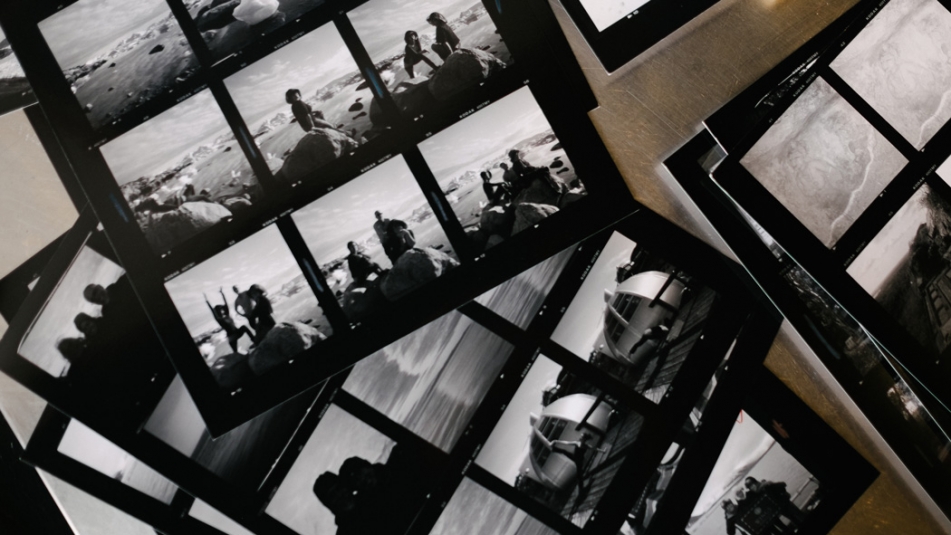 The meltdown that Forman learned about a decade ago in Greenland has only accelerated. The ice sheet there has lost a staggering 2,400 gigatons of ice in that span, enough water to fill Lake Erie five times over.

In Antarctica, which Forman has also visited to document, estimates indicate that the ice sheet is losing roughly 160 gigatons of ice a year since 2010. In recent years, ice shelves the size of Eastern states stretching out from the Antarctic Peninsula have disintegrated spectacularly. Scientists have also found that some glaciers extending off the ice sheet could be in permanent retreat.

“West Antarctica is the weak underbelly,” Nathan Kurtz, the project scientist for NASA’s Operation Icebridge, said. “There’s a particular set of glaciers in the West Antarctic, the Thwaites and Pine Island, which results show are in potentially unstoppable retreat.”

Losing Thwaites, Pine Island and the other glaciers that backstop West Antarctica would speed the flow of ice to the sea and raise oceans up to 13 feet over the course of centuries. And the threat isn’t that distant. By 2100, scientists project that ice melt in Greenland and Antarctica could push seas 3 feet higher, which would be devastating for coastal cities around the world.

But clinical projections from climate models haven’t exactly rallied the world to curb carbon pollution and stave off the worst impacts of climate change.

That’s what makes Forman’s work compelling. She takes abstract models and far-away places and evokes a reaction. Her drawings force people to take notice and engage on a deeper level than facts and figures. 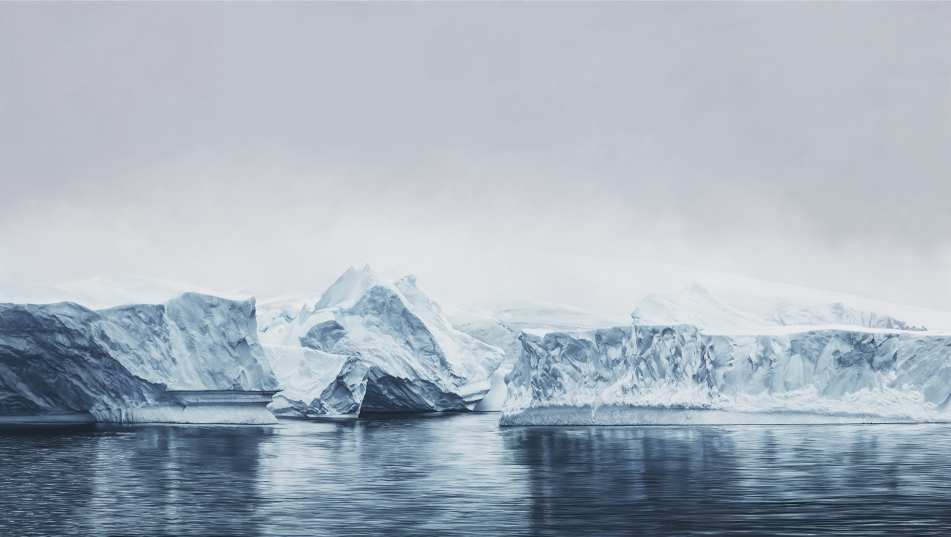 “Art inevitably creates an emotional response,” she said. “We also want to protect that which we love. If I can offer people a time and place for viewers to have an emotional connection with these remote landscapes, and fall in love with them as I have, perhaps they will be inspired to protect and preserve them.

Forman redoubled her own efforts, visiting Antarctica last fall with NASA scientists working on Operation Icebridge, a project that uses aerial surveys to better understand how climate change is altering Greenland and Antarctica. Scientists on the survey recently monitored the growing crack in the Larsen C ice shelf and are keeping an eye on other icy happenings like under-ice canyons.

“Every time I go down and see Antarctica, I’m amazed at how vast it is,” Kurtz, who has been on six Icebridge flights including Forman’s trip, said. “I see the measurements we’re taking, and I know what the measurements are showing us. It’s humbling.”

In addition to taking photos and finding inspiration for new work, Forman also wanted to better understand scientists’ research and include it in her work. Kurtz said Icebridge regularly flies with 10 types of instruments that can measure changes in the surface as well as ice-penetrating radar that provides insights into the bedrock below. 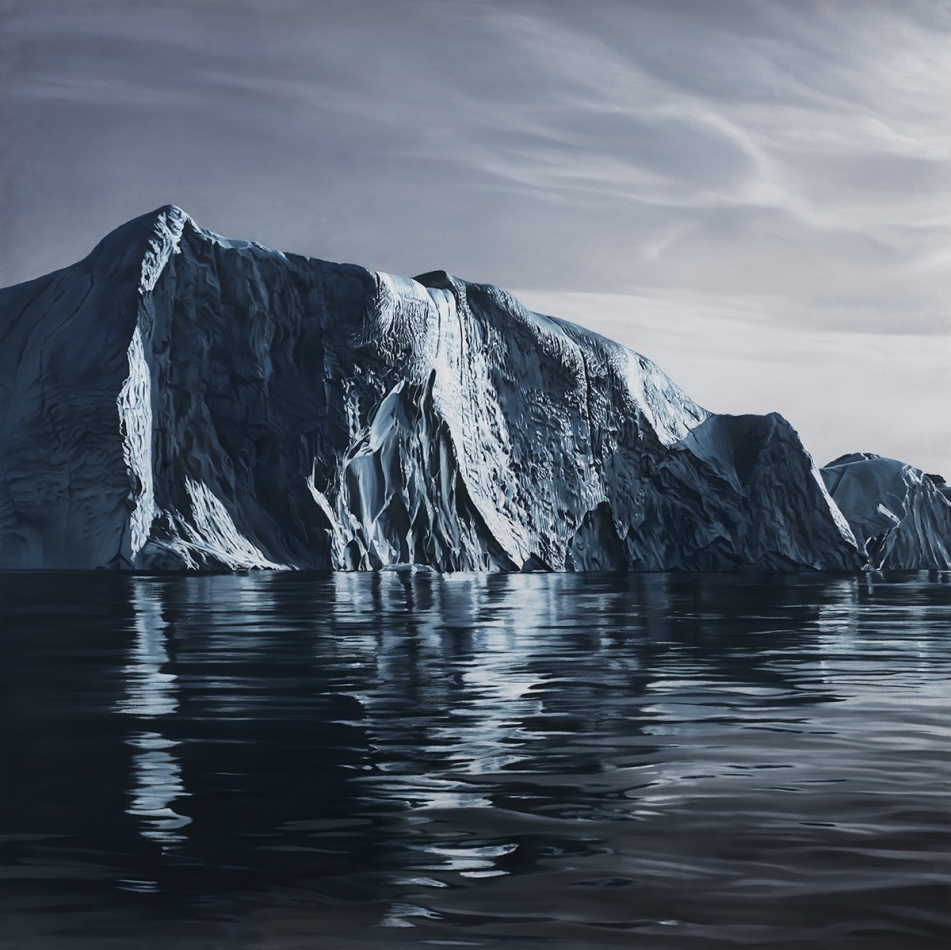 For Forman, it was the first time she was able to take aerial photos, providing a whole new perspective to her sea level-bound drawings. Over the course of 10 days, she logged 26,000 miles and nearly 70 hours of flight time above the seventh continent. She’s heading out with IceBridge again this spring. This time Forman will observe and document the imperiled glaciers on Greenland’s western flank.

She also took her 133,000 Instagram followers with her, sharing photos from the trip to spread the beauty of one of the world’s most remote places. That reach can help amplify her message of hope, one that’s radically different from the majority of messages about climate change. But for Forman, it’s the only message that matters.

“Dwelling on the bad stuff is not going to help us anymore,” she said.