Weekend Blizzard Was a ‘Multi-Billion-Dollar’ Disaster

Sledders from Capitol Hill to Central Park enjoyed bluebird skies on Sunday after a massive winter storm swept across the Northeast and Mid-Atlantic. But while the joy on sledding hills across the region was palpable, so too was the cost of the storm.

Crippling snow, coastal flooding, icing and high winds all conspired to make this storm the first billion-dollar disaster of 2016 in the U.S. 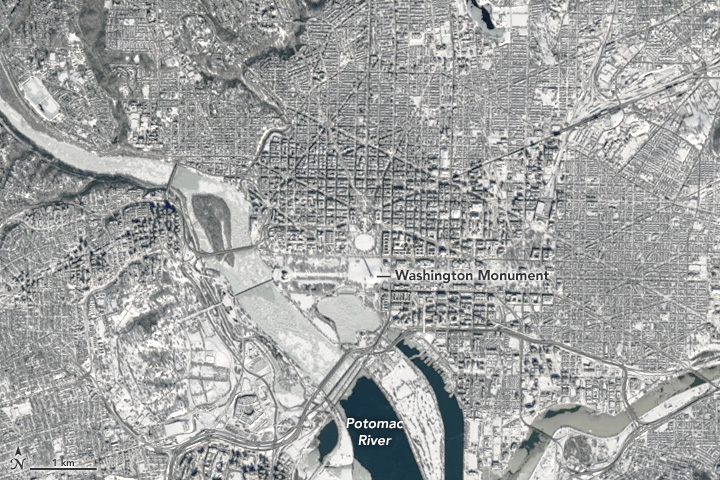 Washington, D.C. from space on Sunday, after being buried under up to 2 feet of snow.
Credit: NASA Earth Observatory

More than 2 feet of snow fell across parts of an area stretching from West Virginia to New York, including a high snow mark of 42 inches in Glengary, W.Va., and records set at some stations in Baltimore, Washington, D.C. and New York. Coastal flooding set high water marks at three stations in New Jersey and one in Delaware while heavy ice coated the Southeast and caused widespread power outages and at least a dozen road fatalities.

In all, the storm affected more than 85 million people directly. But the effects spread out beyond the Eastern Seaboard. Some of the nation’s busiest airports canceled an estimated 13,800 flights, sending ripple effects across the U.S. and the globe.

According to Aon Benfield, a reinsurance company, the storm is likely to be classified as a Category 4 or 5 winter storm using the Regional Snowfall Index, a metric which rates the severity of winter storms. It’s similar to the Saffir-Simpson scale used to classify hurricanes, but in addition to looking at meteorological metrics like snowfall, it also incorporates population affected to give a more holistic view of how severe a storm was. A Category 4 storm is one that’s “crippling” while Category 5 is “extreme.”

Imagery from the Suomi NPP satellite shows the aftermath of this weekend's blizzard as well as how sharp the snow cutoff gradient was. Click to enlarge. Credit: NOAA Environmental Visualization Laboratory

The last Category 4 winter storm to hit the U.S. according to the National Centers for Environmental Information database was a December 2004 storm that brought heavy snow and ice to the Ohio River Valley. The last one to hit the Northeast and Mid-Atlantic was a February 2003 blizzard, which brought 15-30 inches of snow from Washington to Boston.

If this storm does indeed rank that high, it would only be the 14th storm to receive a Category 4+ rating in the Northeast and Mid-Atlantic since 1900. While the economic toll is still being added up, the National Weather Service’s initial estimate of this storm being a billion-dollar disaster appears accurate, according to Aon Benfield.

“It is anticipated that this will be the first billion-dollar weather event of 2016 for the United States,” the re-insurer said in a statement. “Given the physical damage to homes, businesses and other structures and automobiles, plus the high costs incurred due to business interruption, it is expected that this will end up being a multi-billion-dollar economic cost.”

The infamous 1996 blizzard — which had a similar extent and impacts — cost an estimated $4.6 billion. Just how many billions this storm ends up costing still remains to be seen as cities and towns continue to dig out from under the snow.

This originally appeared on WXshift.com.