We Just Breached the 410 Parts Per Million Threshold

The world just passed another round-numbered climate milestone. Scientists predicted it would happen this year and lo and behold, it has.

On Tuesday, the Mauna Loa Observatory recorded its first-ever carbon dioxide reading in excess of 410 parts per million (it was 410.28 ppm in case you want the full deal). Carbon dioxide hasn’t reached that height in millions of years. It’s a new atmosphere that humanity will have to contend with, one that’s trapping more heat and causing the climate to change at a quickening rate. 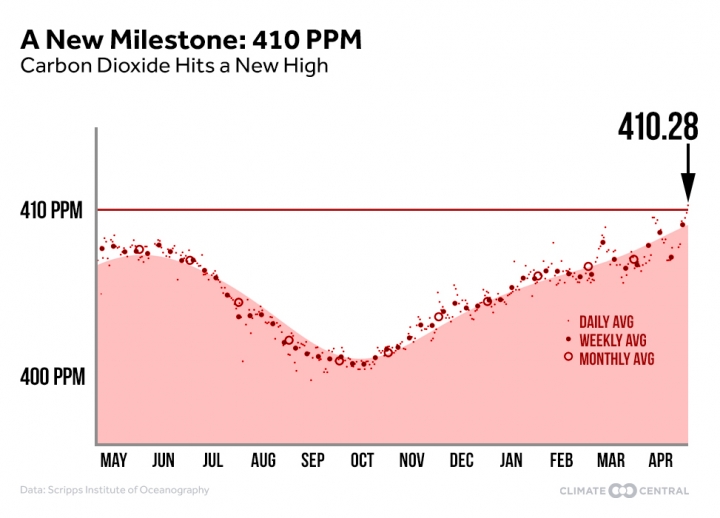 In what’s become a spring tradition like Passover and Easter, carbon dioxide has set a record high each year since measurements began. It stood at 315 ppm when record keeping began at Mauna Loa in 1958. In 2013, it passed 400 ppm. Just four years later, the 400 ppm mark is no longer a novelty. It’s the norm.

“Its pretty depressing that it’s only a couple of years since the 400 ppm milestone was toppled,” Gavin Foster, a paleoclimate researcher at the University of Southampton told Climate Central last month. “These milestones are just numbers, but they give us an opportunity to pause and take stock and act as useful yard sticks for comparisons to the geological record.”

Earlier this year, U.K. Met Office scientists issued their first-ever carbon dioxide forecast. They projected carbon dioxide could reach 410 ppm in March and almost certainly would by April. Their forecast has been borne out with Tuesday’s daily record. They project that the monthly average will peak near 409 ppm in May, setting a monthly record.

Carbon dioxide concentrations have skyrocketed over the past two years due to in part to natural factors like El Niño causing more of it to end up in the atmosphere. But it’s mostly driven by the record amounts of carbon dioxide humans are creating by burning fossil fuels.

Even when concentrations of carbon dioxide level off, the impacts of climate change will extend centuries into the future. The planet has already warmed 1.8°F (1°C), including a run of 627 months in a row of above-normal heat. Sea levels have risen about a foot and oceans have acidified. Extreme heat has become more common.

All of these impacts will last longer and intensify into the future even if we cut carbon emissions. But we face a choice of just how intense they become based on when we stop polluting the atmosphere.

Right now we’re on track to create a climate unseen in 50 million years by mid-century.

You May Also Like:
The March For Science is Heading to Greenland
The Climate Could Hit a State Unseen in 50 Million Years
Zaria Forman Finds Beauty in the Things We’re Losing