Warm and Wet Are the Buzzwords for the Summer of 2013

After the scorching summers of 2011 and 2012, this year might have felt cool and even downright chilly for some parts of the U.S. But in terms of the record books, this summer’s temperatures still came in above average for the country according to a recent report from the National Oceanic and Atmospheric Administration (NOAA). Rainy weather in the East Coast and more recently, the Mountain West, also made this one of the top 10 wettest summers and put a dent in drought. 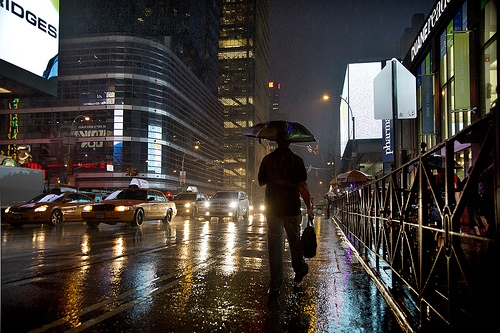 A man walks in the rain in Manhattan. New York experienced its rainiest summer on record this year.
Credit: Christoph Jacrot/Flickr

Overall, fewer Americans experienced the extreme heat this summer that made 2012 so scorching. This year, 1,667 weather stations recorded at least one day above 100°F across the country. In 2012, that number was 4,406.

The most dramatic drop in 100°F days was in the Southeast and Ohio River Valley. Many states in those regions experienced cooler-than-average temperatures, bisecting a swath of warmer-than-average states in the Northeast and western half of the U.S. Twelves states in those regions had one of their 10 warmest summers on record. Most notable were Utah, which had its third warmest summer and Idaho, which had its second. Perhaps not surprisingly, both Salt Lake City and Boise experienced their hottest summers. Beyond the contiguous U.S., Alaska also recorded its second hottest summer on record. The hot weather led to salmon die offs and numerous baked Alaska references.

Each state's average temperature ranked for the period from June through August.
Credit: NCDC/NOAA

Precipitation was a little more extreme across the country, which recorded its eighth-wettest summer on record. Heavy rainfall soaked the Southeast. Florida had its wettest summer, breaking a record set only last year. In addition, Georgia, South Carolina, and New York all set marks, while 16 other states experienced top 10 wettest summers.

California just missed the cutoff, having its 16th-wettest summer on record. However, the state is still in the middle of its driest year on record. That’s because summer rainfall is a small percentage of overall precipitation the state receives annually.

Most precipitation falls in the winter months. Last year ended on a wet note, with reservoirs at nearly 120 percent of capacity in December 2012.

However, snowpack peaked in mid-March, which is two weeks early according to Michael Anderson, California’s state climatologist. That led to runoff happening earlier than expected. “In may we had a drop when we’d normally still be filling,” he said. Since then, California’s reservoirs have fallen to less than 80 percent of their capacity.

Each state's precipitation total ranked for the period from June through August.
Credit: NCDC/NOAA

Along with lowered reservoirs, this year’s drought has left vegetation dry and primed for intense wildfire. These conditions helped fuel the recent Rim Fire, which blew up near Yosemite National Park, to become California’s third-largest wildfire on record and leave a “moonscape” behind, according to a report from the Associated Press.

The more than 17 inches of rain that fell last week helped make it the wettest year ever recorded in Boulder, Colo. Heavy rains there and across the central part of the state also made a doughnut hole in the drought that has gripped much of the western U.S. for the past year.

“There’s a 2- to 3-category improvement in drought in those areas,” said Jake Crouch, a climate scientist at NOAA’s National Climatic Data Center. Drought is ranked by categories ranging from abnormally dry to exceptional by the U.S. Drought Monitor. 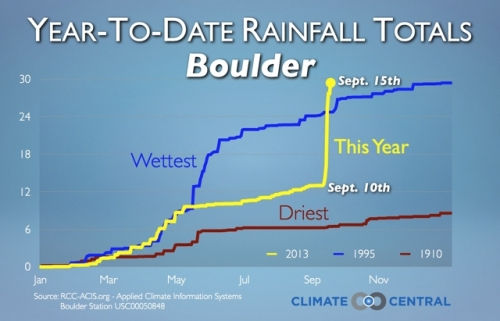 So much rain fell since Sept. 9 that Boulder, Colo., went from having one of its driest years on record to its wettest.
Click image to enlarge. Credit: Dennis Adams-Smith/Climate Central

Looking ahead to October, Front Range residents are likely to have a reprieve as NOAA is forecasting below-normal precipitation for the eastern half of the state along with most of Kansas and Nebraska.

With the likelihood of El Niño or La Niña developing this fall or winter very low, the seasonal forecast for the next three months becomes a bit murky. Both phenomena tend to make seasonal trends more predictable in certain parts of the U.S.

In their absence, forecasters rely on other patterns, such as the North Atlantic Oscillation and Pacific Decadal Oscillation, that tend to have weaker connections with U.S. seasonal climate or are more difficult to predict to improve their forecasts.

For now, NOAA is forecasting a small area of above-normal precipitation for October through December in parts of Montana, Idaho, Wyoming, and Washington, which may give skiers cause for hope. Above-normal temperatures are also more likely for much of the western U.S. and Northeast through the fall and early winter, but with the globe not experiencing a month with below-normal temperatures since February 1985, that seems like a safe bet.

Related Content
Monsoon Rains Bring Some Relief to Southwest
Wet, Wetter, Wettest Makes July No. 5 in the Record Books
Western Drought Intensifies, Leads to Deadly Wildfires
Climate Change May Be Easing Devestating 2012 Drought
The Globe's More Than 28-Year Warm Streak Continues
Summer of 2012 is Hottest on Record For Many in U.S.