Number of U.S. Coal Mines Falls to Lowest on Record

Reports of coal mining companies going bankrupt — at least 26 have done so since 2009 — come frequently these days as natural gas use rises at electric power plants and climate policy puts coal mine investors on notice for the future.

So it may come as no surprise that the number of new coal mines opening each year in the U.S. has fallen to its lowest point in at least a decade, and the total number of operating coal mines has hit its lowest point on record, according to a report released Wednesday from the U.S. Energy Information Administration. Records date back to at least 1923. 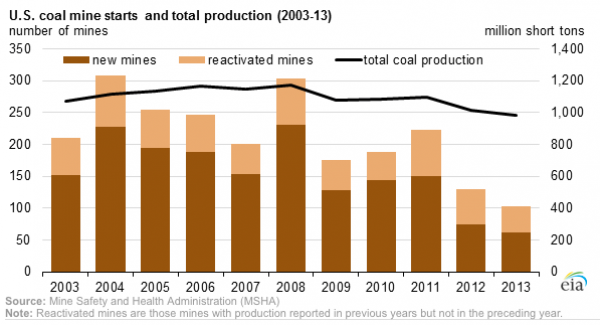 Electric power generation, mainly through coal burning, is the largest source of greenhouse gas emissions driving climate change, making up 31 percent of total U.S. emissions in 2013. Of all the carbon dioxide emissions generated by the electric power sector, coal is responsible for 77 percent. It’s also the primary target of the Obama Administration’s Clean Power Plan, which seeks to slash carbon emissions from power plants using fossil fuels 32 percent by 2030.

Coal companies opened 103 new mines in the U.S. in 2013, a 14 percent decline in producing coal mines over the previous year, EIA data show. Those mines opened as 271 others were idled or shut down in 2013, the most recent year for which data is available.

Preliminary data for 2014 suggest that there was a slight increase in the number of coal mine openings last year, but the data are not yet complete and the trend is still downward, the EIA report says.

The decline of new coal mine openings has been partly fueled by the abundance of cheap natural gas and pre-dates the Clean Power Plan, which was announced in 2014 and finalized in August.

“Certainly, we’ve seen flatter electricity demand,” EIA operations research analyst Diane Kearney said. “There’s competition from natural gas. There’s been the Clean Power Plan on the horizon and the much-touted regulations that are kind of pending here and there. I think it’s a difficult climate just profit-wise because of competition with natural gas.”

Mining companies, which are being hit by lower international demand for coal, are reluctant to open new mines, she said.

A report published in March by the London-based Carbon Tracker Initiative said that many U.S. coal companies have been hit by cheaper solar and wind power and the American fracking boom, which has flooded the market with natural gas, encouraging utilities to switch to gas from coal to produce electricity.

“Cheap gas has knocked coal off its feet, and the need to improve air quality and ever-lower renewables costs has kept coal down for the count,” Carbon Tracker researcher Luke Sussams said in a statement.