The air across the plain sizzles in the 95-degree heat, blurring the image of the huts in the distance. There’s a 23-year-old Maasai warrior named Lekoko beside me and a group of 35 American tourists behind me. Despite having only spent three months learning English, Lekoko gives us a seamless tour of his boma, a circle of five clay huts surrounding a livestock pen.

He explains that the Maasai have lived in present-day Tanzania since the 15th century, and they have traditionally survived as pastoralists, or nomadic cattle herders. As a young boy, Lekoko learned how to protect his cattle from lions and how to find the greenest pastures. But now climate change is rocking the Serengeti, and it is threatening the Maasai’s way of life.

Africa is predicted to endure 50 percent more warming from climate change than the rest of the world, which will make conditions more unpredictable in Tanzania. 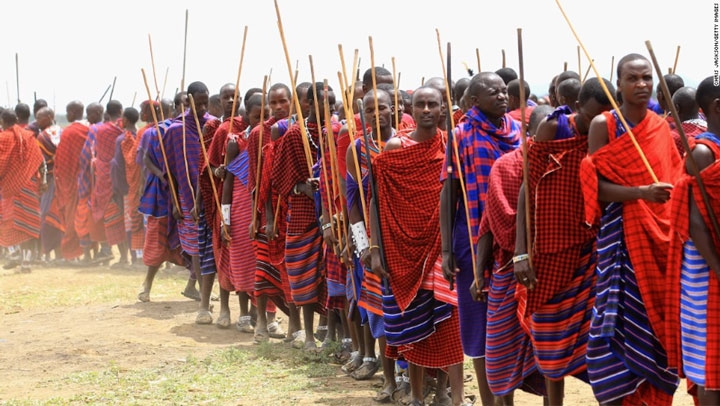 Snow coverage on Mount Kilimanjaro has already been retreating, and locals are noticing that the climate is much drier than in the past, punctuated by more extreme flooding. These trends disrupt the growing cycles and change the resource distribution of the Serengeti ecosystem, making it harder for the Maasai to find adequate resources to feed their cattle and survive.

The Maasai have faced extreme environmental challenge like this before— the Serengeti has always had a harsh climate — but they survived because of their ability to move. The Maasai can’t do that as easily anymore. They are losing their rangelands, are limited by property rights, and are being forced to convert to a more sedentary lifestyle.

The Maasai are becoming increasingly dependent on farming permanent plots of land instead of roaming the open plains. When the Europeans arrived in the late 1800s, they set aside 38 percent of Tanzania’s land for national parks and wildlife preservation. But now, over 800,000 Maasai people have been relegated to ramshackle villages on the edges of national parks, and are among the poorest in the nation.

In addition, the region’s population is skyrocketing, demand for agriculture is increasing, and tourism is growing, all of which are squeezing the Maasai even further into impossibly tiny pockets of the landscape.

With climate change warming the Earth at an unprecedented rate, all of these existing issues will be exacerbated, potentially pushing Maasai communities to the brink of survival.

Emma Hutchinson is trained as an environmental scientist with specializations in economics, communication, and policy. Her communication experience ranges from maintaining her blog to running social media outlets and developing communications strategies for non-profit organizations. Hutchinson specializes in communicating scientific concepts in ways that are accessible to the public.