The Irish-Canadian team setting out next week to cross the Northwest Passage by row boat knows full well the hazards of the fabled journey through the Arctic: the unpredictable storms, the ice jams, the prospect of becoming prey for a polar bear.

“They are the only animal out there that will actively hunt down a human being,” said Kevin Vallely, a veteran adventurer who is part of the expedition.

The four-man crew is due to set off in their 8-meter rowboat from Inuvik on July 1, on a journey meant to showcase the extreme effects of climate change on the Arctic. 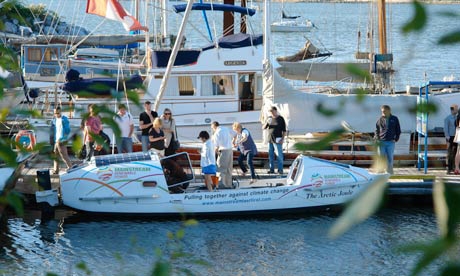 The Irish-Canadian team will set out on July 1 across the Northwest Passage on a journey to showcase the extreme effects of climate change on the Arctic.
Credit: Mainstream Last First

The journey itself is one of those consequences. The team hopes to be the first expedition to complete the route in a single season – an ambition only made possible because of the dramatic melting of summer sea ice in recent years.

“This expedition has never been done before, and could not be done before,” said Vallely, a Vancouver-based architect and adventurer. “It is being brought about because of climate change. There just is less and less ice.”

Such changes are all too real to the small communities along the 3,000-kilometer route who have reported changes in the migration patterns of the animals they depend on for survival, such as muskox and Arctic char [fish].

After departing Inuvik, in Canada's Northwest Territories, the team will row their way through Tuktoyaktuk, to Pond Inlet, Nunavut. They hope to break their journey for a few days at the hunting camp of Cambridge Bay.

“The way of life for people who live up there is already changing very, very fast,” said Paul Gleeson, an Irish rower and cyclist. “This gives us an opportunity to make a wider audience aware of how it will actively affect them.”

The journey in the customized rowboat, the Arctic Joule, will take about 80 days – a fraction of the time it took the first European explorers who tried for years to find a route through the ice-locked waters of the Arctic to the fabled richest of the Orient. 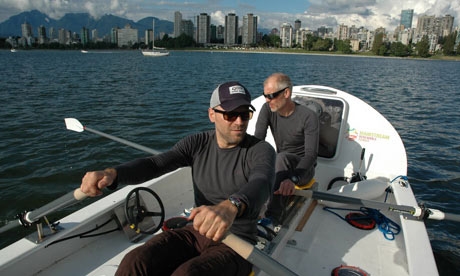 The four-man crew will complete the crossing in shifts, with each pair taking a four-hour turn at the oars. The non-rowing pair will blog, take videos, or gather data on Arctic char under climate change for a study for the Canadian fisheries department.
Credit: Mainstream Last First

Those early journeys in the days before steel-hulled ice breakers left behind a trail of shipwrecks and horrifying records of suffering, including slow starvation, frostbite, food poisoning, and mass cannibalism when the explorers became trapped by the Arctic winters.

The first successful crossing from east to west was completed in 1906, only after Roald Amundsen anchored his boat and skied the last 800 kilometer to a telegraph office in Alaska.

Even those crossings in the modern era – including a number over the past few years by kayak – have occurred over multiple seasons.

But with the rapid melting of the Arctic under climate change, and the prospect of new shipping routes across the region, Vallely said his crew hoped to make the crossing entirely under human power, without resort to sails or engines.

The boat, which was more than a year in the making, was built for self-sufficiency. It was designed so that all four men could live and sleep on board, and that it could be hauled up on land quickly, in the event of a sudden storm.

The four-man crew will complete the crossing in shifts, with each pair taking a four-hour turn at the oars. The non-rowing pair will blog, take videos, or gather data on Arctic char under climate change for a study for the Canadian fisheries department. Their trip is sponsored by clean energy firm Mainstream Renewable Power.

Unlike the earliest explorers, Vallely and his crew had the relative luxury of studying those first attempts to find a way through the ice-locked Arctic. Between the four of them they have a half-century of expedition experience. 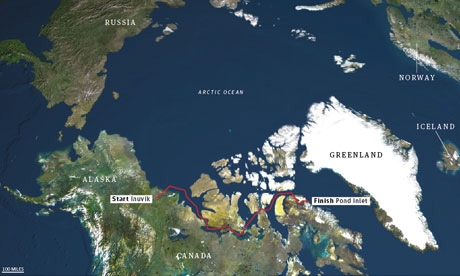 Map showing the route of Irish-Canadian team that will set out on the July 1 expedition.
Credit: guardian.co.uk

The crew can also rely on modern technology, including weather forecasts from Environment Canada.

But there will still be plenty of hazards en route. Without engine or sail power, the crew have little chance of rowing their way out of an ice jam, and those great violent swirls of ice could easily wreck their boat. “We have to make sure we don't get caught in a soup of ice, which could be catastrophic and really dangerous.”

If the boat were to capsize, survival time in the icy waters of the Canadian Arctic would be in the order of minutes, not hours. Then there are the polar bears.

On a route so laden down by its history of loss and heroic endeavors, the team is clear they will not attempt any extraordinary interventions – should their journey take them into close proximity to a polar bear.

The crew will carry sound as well as rubber bullets to try to scare the bears off – with a shotgun as the last order of defense – in the event they are forced to beach and encounter an animal on land. But said Gleeson: “Obviously our main strategy is going to be to avoid the polar bear.”