As states begin the long task of reducing greenhouse gas emissions from electric power plants to comply with new federal climate policy, a 27-year low in carbon dioxide emissions earlier this year shows the U.S. may be heading toward meeting its emissions goals. 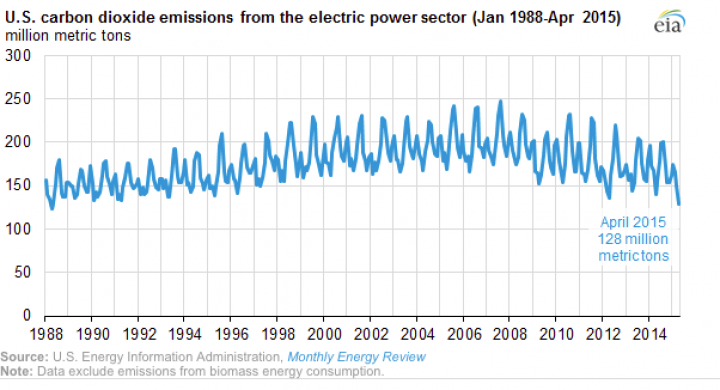 That continues a long-term trend of declining electric power sector carbon dioxide emissions in the U.S. that began after they peaked at about 250 million metric tons in the summer of 2007. April is the month each year when power plants emit the least carbon dioxide because heating and cooling demand is very low in the early spring.

The 27-year low in power plant carbon emissions comes as the U.S. Environmental Protection Agency has finalized the Clean Power Plan. The plan requires states to cut carbon emissions from existing power plants running on fossil fuels by generating more electricity from renewables and natural gas and by making buildings more energy efficient, among other measures. 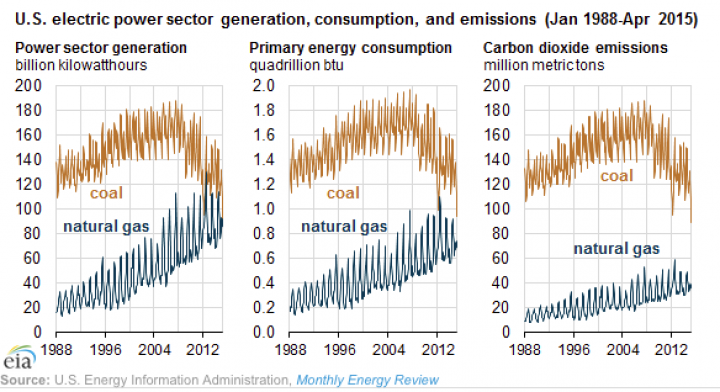 “I think it’s indicative of the transition that’s underway in the power sector,” said Dan Bakal, electric power program director at Ceres, a sustainability think tank that has researched each state’s preparations to comply with the federal climate policy. “The Clean Power Plan will solidify that kind of transition and accelerate it a little bit.”

Each passing month increases the probability that natural gas will once again surpass coal as the nation’s dominant fuel for electricity production, especially as more coal-fired power plants are retired, he said.

“With the Clean Power Plan, that would continue that trend,” he said.

You May Also Like:
From Katrina, an ‘Amazing’ Decade of Climate Research
Hawaii May Say ‘Aloha’ to More Hurricanes
All of 2015’s Rain for the U.S. in 14 Seconds