New York City has set out a plan to quicken its pace of decarbonization in order to meet its emissions reduction target, as the metropolis prepares for a daunting sea level rise due to climate change.

The proposals state that New York “must accelerate efforts” to expand renewable energy generation, improve the energy efficiency of buildings, transition to electric vehicles and improve waste management in order to meet its goal of cutting greenhouse gas emissions 80 percent by 2050, based on 2005 levels.

The city has already lowered its emissions by 14 percent and is set to almost treble this reduction by 2030, but the road map warns that these efforts are not enough and “we must continue to do more to reduce emissions in New York City and lead progress across the globe if we are all to avoid the worst impacts of climate change.” 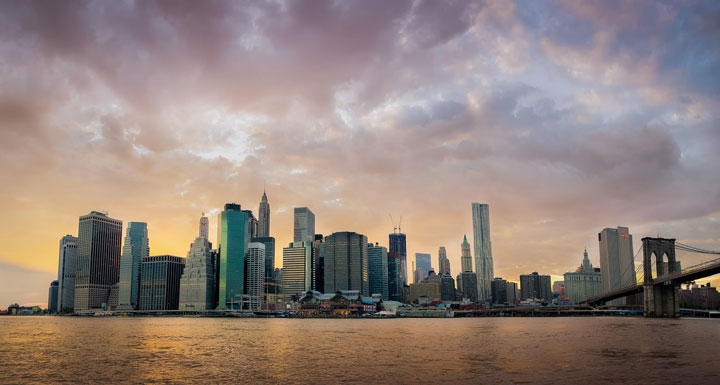 Mayor Bill de Blasio said: “Locally, we have continued to drive down our emissions, but we have much more to do.”

New York is set to be increasingly challenged by sea level rises caused by melting glaciers and thermal expansion of the ocean as the planet warms. By 2100, sea levels could be up to 50 inches higher than today in New York, a scenario that has prompted the city to pledge billions of dollars for flood defenses and adaptation. Still, high-value property in Manhattan is considered a long-term risk, with some scientists believing that a managed retreat from parts of the city is inevitable.

The plan states that work on many fronts will be required to lower emissions, as retrofitting buildings or even a completely renewable-based energy grid won’t be enough by themselves to meet the target.

“It’s all incredibly challenging,” said Daniel Zarrilli, New York city’s chief resilience officer. “It’s not so much a technology challenge, it’s more of a financial and even societal challenge of how we use energy. Residents need to push governments to go farther but there are things they can do. It starts with awareness of how we use energy and our waste stream.”

The report lays out a strategy of increasing direct and indirect investments in large-scale renewables, building upgrades, incentives for electric vehicles, policies to encouraging walking and cycling and a goal of reducing waste going into landfill sites.

While New York has already made progress in areas such as building energy efficiency, a key ongoing challenge is likely to be energy generation. New York state is winding down its nuclear capacity, which provides a third of New York City’s power, requiring a sharp uptake in renewables. Last year the state generated 242 MW of solar electric capacity but that will need to hit 1,000 MW by 2030.

“All of this road map is quite feasible but the big issues are around the future of power generation,” said Columbia University academic Jeffrey Sachs, who is an adviser to the city.

“We need to have a business model around power that includes wind and solar and a massive scale up of hydroelectric from Canada. That hasn’t been worked out yet, nor has the roll out of electric vehicles. This will take decades to do but nonetheless something we need to hurry in order to be successful.”

Sachs said New York was a leader within the U.S. on cutting emissions but that some overseas cities were even more ambitious. Within the C40 coalition of climate-concerned cities, of which New York is a member, Copenhagen is aiming to get to zero net emissions by 2025 and Stockholm is planning to reach the same goal by 2040.