How much electricity did solar and wind installations generate in your area in the past 24 hours? How much power will they produce today and tomorrow?

The vast majority of Americans support expanding the production of solar and wind energy. But the average person has no easy way to understand how much power those energy sources actually generate in his or her community, on a day-to-day basis.

That has changed. In September 2018, Climate Central, a non-advocacy, non-profit research organization, released a free online tool that will let TV meteorologists across the United States share three-day estimates of local solar and wind power generation with their viewers, across a number of straightforward metrics. The tool is part of the Climate Matters initiative, which provides local, ready-to-use information about climate change — from broadcast-ready graphics to data analysis — to more than 600 TV meteorologists around the country. 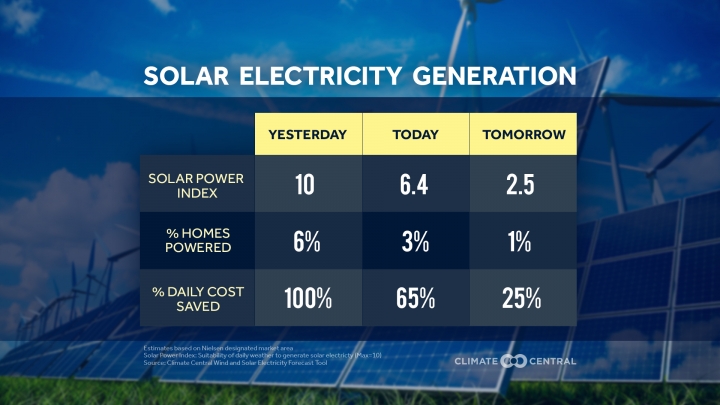 Here’s how the new tool works. Each morning, Climate Central downloads hourly historical and forecast data on local wind speeds and solar irradiance across the country, provided by MESO, an atmospheric modeling and consulting group. The tool takes this data and combines it with data on installed solar and wind electricity generating capacity (sourced from the Energy Information Administration, the Open PV Project, the Solar Energy Industry Association, and the U.S. Wind Turbine Database) to calculate the amount of wind and solar electricity generated in individual locations throughout the United States. Using yesterday’s wind and sun actuals, along with projected weather data, the tool estimates yesterday’s electricity generation, and approximates the likely generation levels for today and tomorrow. The results are freely accessible online to both TV meteorologists and the general public.

Specifically, the tool produces hourly results for every cell in a 0.05° latitude by 0.05° longitude grid across the United States. It then creates daily, regional results by aggregating the hourly figures into 24-hour periods, and by combining the cells into blocks that coincide with the U.S. TV market areas delineated by Nielsen. Television market areas are relatively small, and wind-generated electricity (unlike solar power) often travels long distances from its source to users; the tool also offers estimates for the Environmental Protection Agency’s eGRID regions, within which electricity generated is usually also consumed. In the future, the tool may also provide information for other geographic units, such as counties, states, congressional districts, and zip codes.

Users access the information by choosing a particular media market from a drop-down menu covering every state in the U.S. The tool then displays electricity generated for that market — in megawatt hours — by both wind and solar sources. In addition to megawatt hours, the tool offers context by providing several other metrics, such as the estimated percent of average homes in each media market those megawatt-hours could power. It also offers wind and a solar power indexes, each a number from zero to ten, that reflects how well-suited the current weather conditions are for solar and wind generation. Finally, the tool describes the percentage of the daily electricity the average homeowner would save with a typical rooftop solar installation (based on average local residential prices for grid electricity).

“Our goal is to provide an easy-to-understand snapshot of how much the weather is already contributing to meeting local electricity needs,” said Dr. Eric Larson, a senior scientist with Climate Central and a senior research faculty member at Princeton University’s Andlinger Center for Energy and the Environment. Dr. Larson helped build the new tool.

By enabling meteorologists to routinely inform their viewers about local generation of renewable electricity, the tool increases viewers’ awareness that low-carbon energy sources are already practical and increasingly widespread. Some 60 percent of Americans regard TV weathercasters as trusted sources of information about climate change; the tool lets meteorologists go beyond talking about climate impacts to address clean-energy solutions — ones powered by the weather itself. Meteorologists’ audiences are big and diverse, which gives them an ideal platform to illustrate the power of clean energy around the country.

This article was republished with permission by North American Clean Energy.