Arctic Warming May Not Be Altering Jet Stream: Study

A new study calls into question the widely-publicized hypothesis that rapid warming of the Arctic climate, including the precipitous loss of summer sea ice cover, is altering weather patterns throughout the Northern Hemisphere. Specifically, the study, which will be published in a forthcoming issue of Geophysical Research Letters, challenges the findings of previous studies that showed a slowdown in the speed and changes in the shape of the jet stream.

In doing so, the study provides additional insight into a nascent area of research regarding how Arctic warming will affect weather patterns in the midlatitudes, notably the U.S. and Europe. As with other emerging scientific issues, consensus on the connections between Arctic warming and midlatitude weather is unlikely anytime soon, but each study can be viewed as providing more clues for future studies.

Much of the current focus centers around the jet stream, which is a channel of fast-flowing air at high altitudes that helps steer weather systems from west to east across the Northern Hemisphere, and it is powered by the huge difference in air temperatures between the equator and the poles. 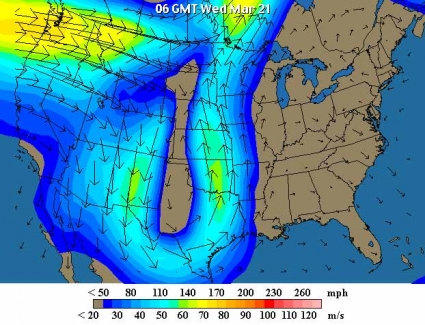 Example of a blocked jet stream pattern that led to extreme weather across the U.S. in March 2012.
Credit: Weather Underground.

Researchers such as Jennifer Francis of Rutgers University and Steven Vavrus of the University of Wisconsin have published studies showing the temperature gradient between the equator and the North pole has shrunk causing changes to the jet stream. The main reason behind this is that the Arctic has warmed at twice the rate of the rest of the Northern Hemisphere, a phenomenon known as Arctic amplification. One of the main causes for the increased warming in the Arctic is melting sea ice, which has declined precipitously since 1981 and hit a record minimum last year.

The research shows that the weaker gradient slows the speed of the jet stream in particular seasons and causes it to meander more than usual and make unusual turns like a tourist wandering through Times Square. Francis’ work has also tied rapid Arctic warming, also known as “Arctic amplification,” to an increase in blocked or stuck weather patterns that have been associated with deadly extreme weather events such as the Russian heat wave of 2010, heat and drought in the U.S. in 2012, and even Hurricane Sandy.

The new study, by Elizabeth Barnes of Colorado State University, calls this research into question by showing that what Francis, Vavrus, and others have shown may just be an artifact of their research methods.

The study concluded that previous research might have construed changes in the height of different layers of the atmosphere for changes in the waviness of the jet stream. The height of specific atmospheric layers are tracked because they correspond to different weather indicators. As the atmosphere warms and air expands, the height of a given layer, measured using its pressure level, also rises. In recent years, the average height of air pressure surfaces has been increasing in the high latitudes, which is consistent with the warming climate.

“This work highlights that observed trends in midlatitude weather patterns are complex and likely not simply understood in terms of Arctic Amplification alone,” the study said. For example, the study found no statistically significant increase in atmospheric blocking events over the North Atlantic, which “suggests that Arctic Amplification over the past 30 years has not had a quantifiable impact on slow-moving weather patterns over North America or the North Atlantic.”

In an email message to Climate Central, Francis said the new study does not significantly contradict her research tying Arctic warming to extreme weather patterns well outside of the Arctic.

“The mechanisms linking Arctic amplification with large-scale circulation patterns are clearly not simple and we still have much to learn. These new results provide additional insight into those linkages,” she said.

However, Francis found fault with parts of the new study. She said that the 30 years of data that Barnes used in her research might hide some of the effects of Arctic amplification, since much of the warming and sea ice loss has taken place in just the past 15 years.

“Because Arctic amplification has emerged from the noise of natural variability only in the last 15 year or so, it is not surprising that its influence would not drive 30-year trends in a statistically significant way,” she said.

Demonstrating the heightened interest in this area of emerging research, on September 12, the National Academy of Sciences is scheduled to hold a workshop in College Park, Md., on new scientific findings related to ties between Arctic warming and midlatitude weather patterns.