The Atlantic hurricane season officially begins on June 1, but is off to an early start this year. Not only is a storm poised to form off the coast of the Southeast, but the first named storm of the season actually occurred way back in January.

Forecasters put the greatest odds on this hurricane season being a near-average one, with smaller chances it will over- or under-perform, the National Oceanic and Atmospheric Administration announced Friday. The outlook predicts 10 to 16 named storms, with four to eight becoming hurricanes and one to four of those becoming major ones.

A major hurricane (defined as Category 3 or stronger) hasn’t hit the U.S. coast since Hurricane Wilma in 2005, though storms like Hurricane Sandy make clear that it’s not only the strongest storms that cause major damage. NOAA authorities have urged coastal residents, particularly those along the Southeast coast this weekend, to make sure they have their hurricane plans in place.

“A near-normal season does not mean that we’re off the hook or that there won’t be hurricane impacts,” NOAA director Kathy Sullivan said during a press briefing. “So now is the time for you to prepare for the upcoming season.” 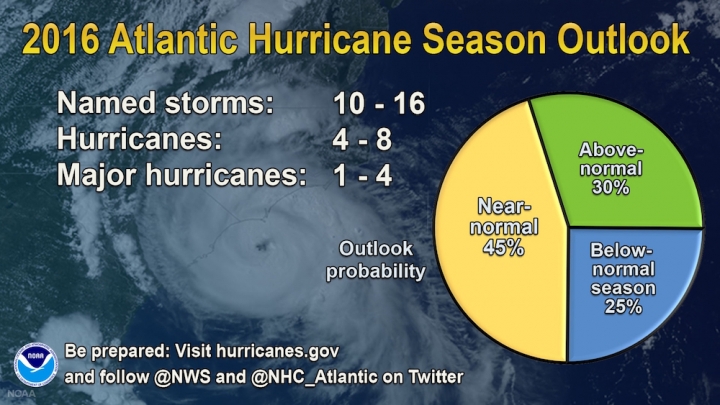 It’s not unusual for tropical systems to form before (or after) the official hurricane season that runs from June 1 to Nov. 30 — those human-imposed dates are only meant to capture the bulk of hurricane activity. Tropical Storm Ana formed in early May last year, and two early bird storms arose in 2012.

Forecasters at the National Hurricane Center are watching a system between the Bahamas and Bermuda that looks very likely to develop into a tropical or subtropical storm over the next day or two. (Subtropical systems are those with characteristics of both tropical and frontal storm systems.)

If this storm does become more organized and its winds reach at least 39 mph, it will be dubbed Bonnie, the second name on the 2016 hurricane list.

Whether or not it does form, the system is headed to the Southeast coast and could mean a stormy, soggy Memorial Day weekend for areas from Georgia up through the Carolinas. With holidaymakers likely flocking to beaches, one major concern is deadly rip currents.

And if Bonnie doesn’t materialize, the 2016 season already got an early start when Hurricane Alex formed in January. It was the first hurricane to arise in that month since 1938.

Unusually warm Atlantic waters helped Alex and other storms form last season, despite unfavorable atmospheric conditions ushered in by a major El Niño. In areas where those conditions periodically became less hostile to storms, the waters provided ample fuel for the convection that drives tropical cyclones.

The demise of El Niño and the potential development of its opposing phase, La Niña, are two of the big variables that could impact activity this year. The effects of El Niño could linger into the early part of the season, Sullivan said, and right now it looks like La Niña — which tends to boost Atlantic activity — could be in place during the peak of the season from August through October.

Another factor is a climate pattern called the Atlantic Multidecadal Oscillation. When the AMO is in its “warm phase,” it favors warmer Atlantic waters and a stronger African monsoon, both of which help fuel storms. That warm phase was in place during recent decades, which featured high levels of storm activity in the ocean basin.

It’s not clear if the AMO may be switching to a cool phase and ushering in a quieter era for storms, Sullivan said.

“This is a more challenging hurricane season outlook than most because it’s difficult to determine whether there will be reinforcing or competing climate influences on tropical storm development,” Gerry Bell, lead seasonal hurricane forecaster with NOAA’s Climate Prediction Center, said in a statement. 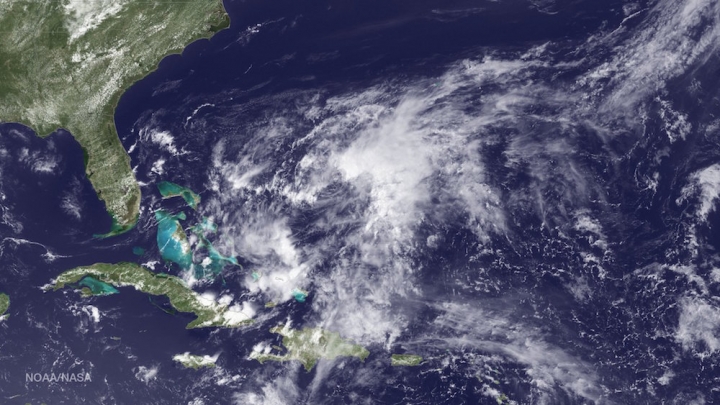 Of those, they expect four to eight to strengthen into hurricanes (again, including Alex) and one to four of those reaching Category 3 status or higher.

While hurricane strength is rated by wind speed, it is often water that causes the most damage and deaths. Tropical cyclones (the generic name for tropical storms and hurricanes) can cause extensive inland flooding — as was seen during 2011’s Hurricane Irene in the Northeast — and through storm surge, or the ocean water its winds push ashore.

With those concerns in mind, NOAA has several tools to help the public better understand their local risks. These include a National Water Model, which can provide hourly water forecasts — including flooding risks — to several million locations, as well as a storm surge map and storm surge watches and warnings.

Storm surge is one of the clearest aspects where global warming is playing a role in intensifying the impact of hurricanes: As sea level rises, potential storm surge increases.

Over the last decade since Hurricane Katrina helped spur a flurry of hurricane-climate research, the science suggests that while hurricanes may not become more frequent overall, the proportion of the most intense storms could rise.

But as hurricane forecasters and emergency personnel are fond of saying, it only takes one hurricane hitting where you live to make all the difference.

You May Also Like:
100 Years of Warming at the National Parks
New Tar Sands Impact on Climate, Air Quality Found
Africa’s Most Vulnerable Face an Even Hotter Future

This originally appeared on WXshift.com.