Canadian scientists have collected stories from more than 90,000 people whose traditional ways of life rely on nature, in an effort to capture signs of climate change where weather stations are absent.

Their findings, published in the journal Nature Climate Change, fill a knowledge gap in climate change science, which is dominated by data and computer models, said the six researchers from Simon Fraser University. 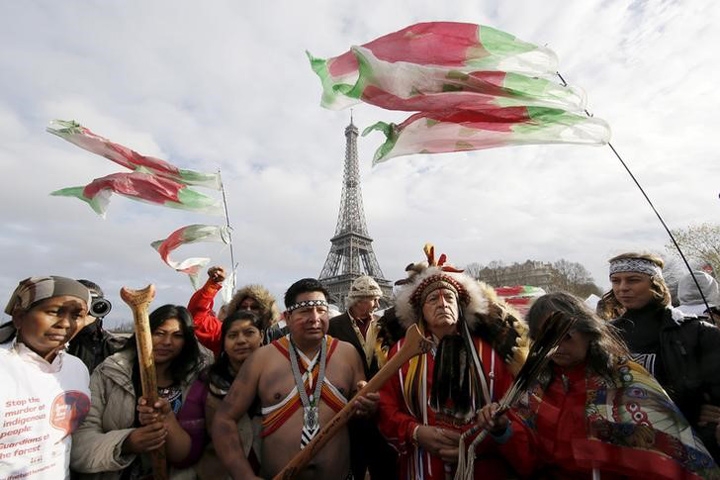 Indigenous leaders from all over the world pray as they sail on the Seine during a gathering demanding true climate solutions in Paris during the COP21 climate change conference.
Credit: REUTERS/Gonzolo Fuentes

Western climate data tends to be absent from places like Central Africa, Central America and the Himalayas, Dana Lepofsky, co-author of the paper, told the Thomson Reuters Foundation. “But we have some people data.”

In all, the researchers gathered observations covering 137 countries that were contained in more than 1,000 published studies.

Their approach to studying climate change reflects an emerging trend among Western researchers to tap into climate knowledge recorded by people who have subsisted off the land and oceans, often for lifetimes or generations, noted Lepofsky.

“You can't look at indigenous people, who are so in tune with their specific places, without hearing about changes in the environment today,” said Lepofsky.

Among a trove of observations — whose origins ranged from Crow tribe hunters in Montana to farmers in Iran — the researchers found some 70 percent of those interviewed had witnessed changes in seasons, rainfall patterns and temperature.

In those places, farmers and others with close ties to the land and sea witnessed climatic changes because these had disrupted ancestral farming, food-gathering or cultural practices.

Sweden's Sami herders, for instance, said they were abandoning traditional ways due to changes in ice formation and weather.

In Bangladesh, an upsurge of punishing windy and stormy days was forcing some fishermen to moor their boats rather than set out to sea, the study said.

And in Canada's remote Nunavut, an Inuit community suspected the grizzly habitat was changing when they noticed the bears roaming in areas where they had not been seen before.

The observations, mostly collected from indigenous people, generally align with data and models developed to predict changes in the climate.

But the researchers hope they add layers of nuance that could guide policy on how to adjust to climate shifts going forward.

“It's not just observations of climate change but people's adaptations (to climate change) too that were compiled,” Lepofsky said. “Ways that people are diversifying crops — all kinds of things people are doing that are working.”